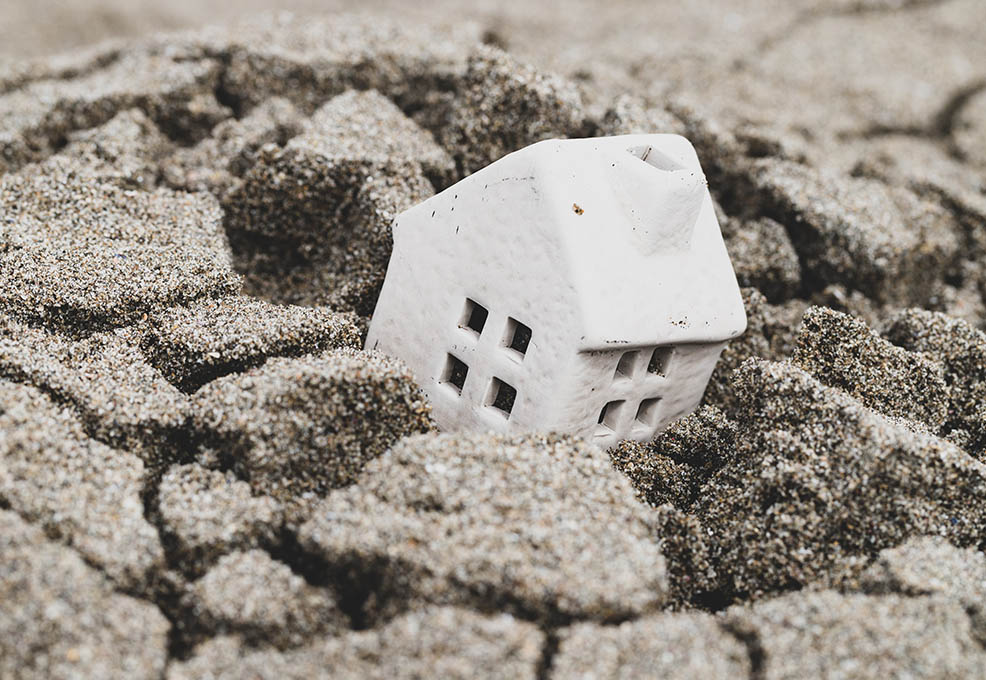 Man-made causes of land subsidence include the extraction of underground resources such as metals, oil, gas, coal and sulfur, or the construction of tunnels and subways, as well as the compression of aquifers due to the massive extraction of underground water bodies. In Taiwan, land subsidence is most severe in the western plain which is dominated by alluvial terrain composed mainly of sand and soil, forming a very loose geological structure. In addition, the surface water resources in Pingtung, Yunlin, Changhua, and Chiayi Counties are insufficient to meet their needs, so groundwater extraction is the main source of water supply. When the pore water pressure in the soil decreases, coupled with the loose geological structure, severe subsidence can occur. With the recent development of InSAR technology, it is possible to repeatedly observe specific areas within a short period of time and obtain information on a wide range of land surface deformation.

Like many countries, Taiwan experiences severe land subsidence, mainly caused by the over-pumping of groundwater. Recent land subsidence in Taiwan is worsened by irregular rainfall and the growing industrial need for water. Over-pumping of groundwater is particularly severe in Changhua, Yunlin, Chiayi and Pingtung Counties. The Taiwan High Speed Rail (THSR) passes through central Yunlin where the rates of land subsidence are the highest in Taiwan. This issue has raised growing public concern. The soil in the central Choushui River Alluvial Fan is relatively weak, and is subject to compactions exerted by the stresses caused by groundwater losses. In addition to Yunlin and Changhua, many parts of Chiayi and Pingtung Counties suffer land subsidence that has led to recent flooding and potential soil salinization. We can prevent land subsidence only when we can measure it.

Fig. 1 shows the principle of InSAR. InSAR combines conventional SAR and the interferometry technique to measure surface deformations resulting from earthquakes, land subsidence and infrastructure failures. In Fig. 1, the first SAR image records the phases of radar waves associated with the ranges from the satellite to the surface within the image coverage. The second image records the phases to the same surface at another time. If the surface experiences land subsidence, the radar phases between the two SAR images will result in interference fringes related to surface deformations and surface elevations. The fringes can be corrupted by atmospheric delays, ionospheric delays, poor reflectance of the surface, and poor orbit of the SAR satellite. As such, much work is devoted to SAR data processing for optimal measurements of land subsidence. Three leading SAR methods are Persistent Scatterers InSAR (PSInSAR), the Small BAseline Subset Differential Interference Technique (SBAS) and the Temporal Coherence Point InSAR (TCPInSAR). 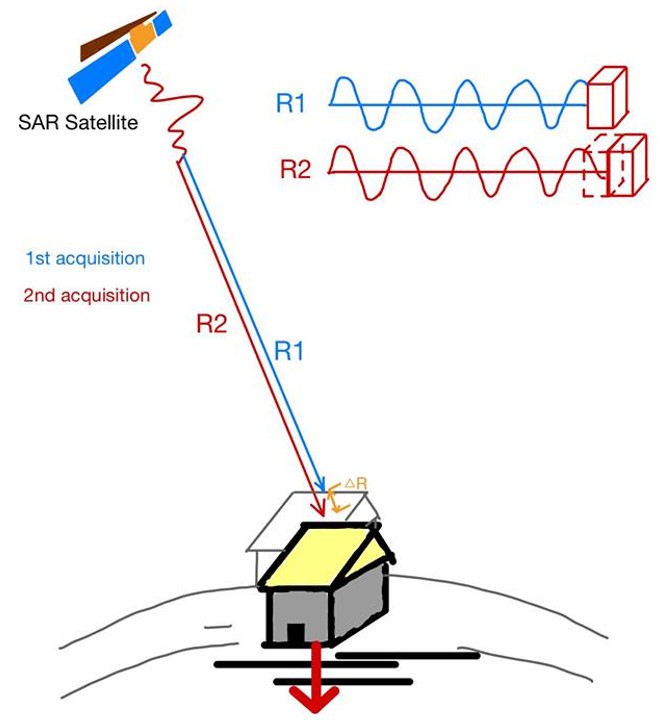 In 1991, the European Space Agency (ESA) launched ERS-1 with a C-band Synthetic Aperture Radar (SAR) and a 35-day revisit period. ERS-1’s successor, ERS-2, was launched in 1995 with the same orbital parameters. In 2002, ESA launched Envisat with an Advanced SAR. In 2006, Japan launched the ALOS satellite, equipped with a SAR sensor called PALSAR. ALOS’ L-band radar has an advantage in observing surface deformations in areas covered by vegetation. In 2014 and 2016, ESA launched Sentinel-1A and Sentinel-1B. These two satellite missions provide short spatial baseline SAR images every 6 days at no cost, and are the most important missions for ongoing, world-wide satellite monitoring of land subsidence.

4. Land subsidence in Changhua, Yunlin, Chiayi and Pingtung from InSAR 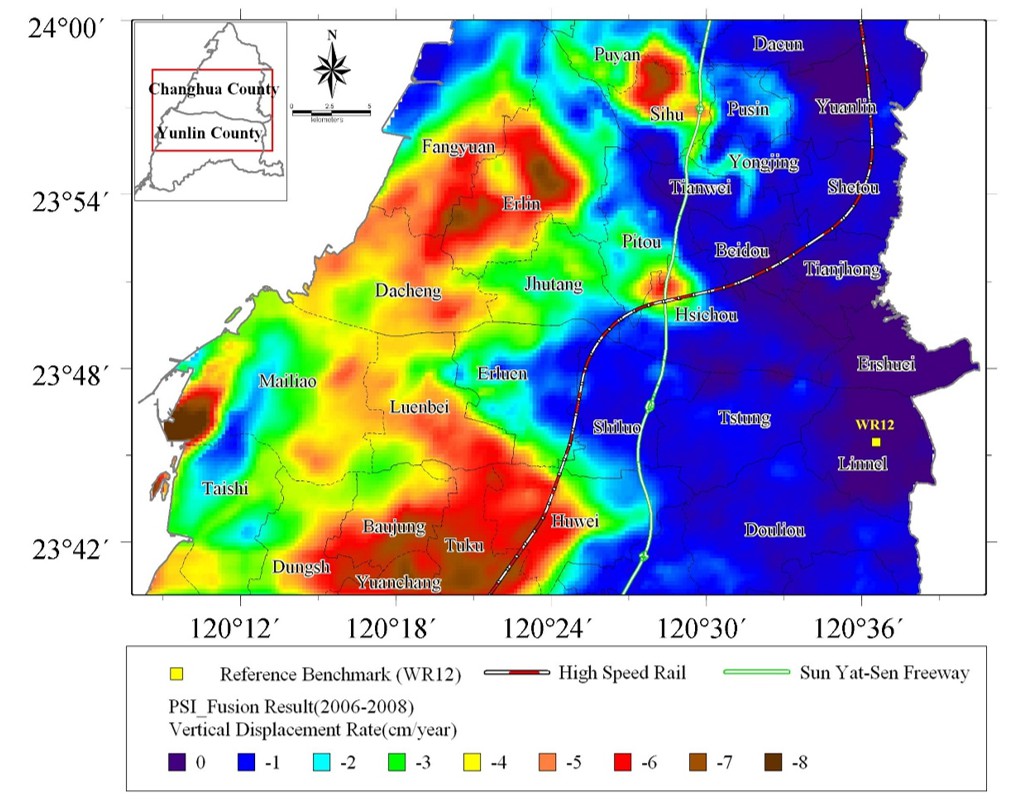 Chiayi County also experiences land subsidence, mainly in its coastal area that hosts a large aquaculture industry. Fig. 4 shows that land subsidence occurs in most parts of Chiayi, with the largest rate of 4.5 cm/year around its coast. The direct risk of Chiayi’s coastal subsidence is poor drainage, which may have caused the flooding in August 2018. Additional risks are salinization of coastal soils and aquifers. Salinization will gradually deplete organic matters from the affected soils to destroy the ecological system here, rendering permanent useless lands. In coastal Pingtung, the largest subsidence rate is 47.3mm/year. Most subsidence-affected areas (see the pixels in Fig. 5) are over fish farms, where all rates exceed 37.8 mm/year. 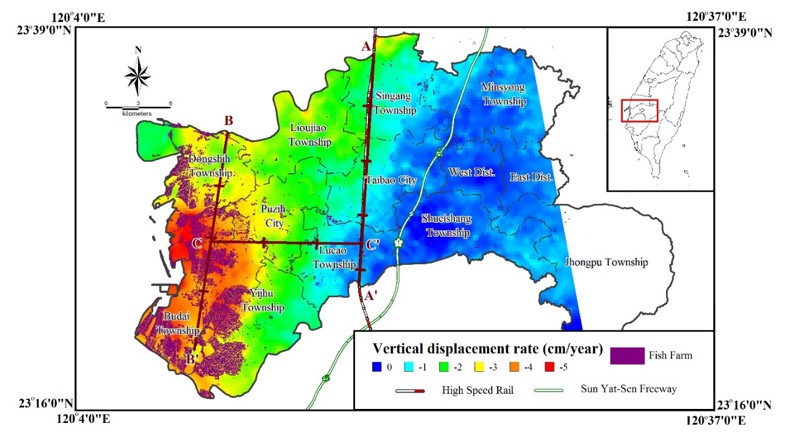 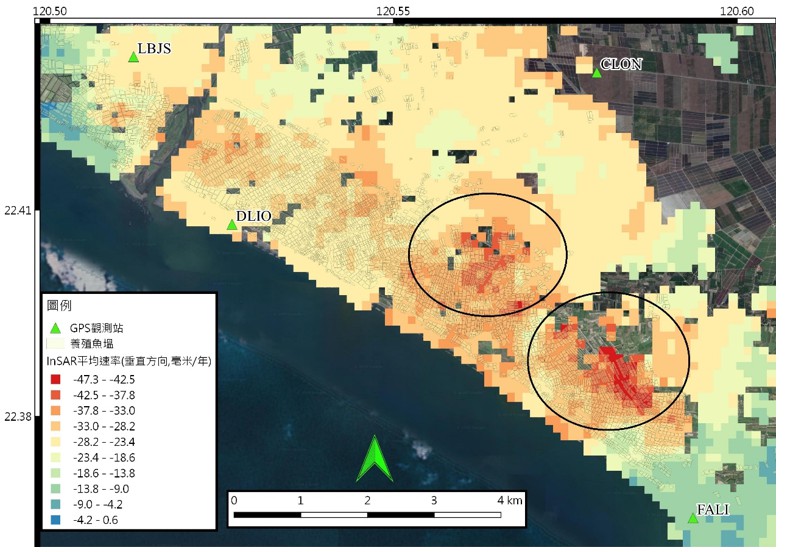 Land subsidence in Changhua, Yunlin, Chiayi and Pingtung occurs as a result of over-pumping groundwater, and unfortunately is still ongoing. INSAR continues to be an indispensable tool for measuring land subsidence in these four counties. In the third phase of Taiwan’s space program (starting 2019), several SAR missions will be launched, and they will join future international SAR missions to facilitate world-wide monitoring of land subsidence.