The all-vanadium redox flow battery (VRFB) is an electrochemical energy storage device which stores and releases electrical energy through electrochemical reactions of the VO2+/VO2+ and V2+/V3+ redox species in the aqueous electrolyte. Therefore, the VRFB can store kWh- to MWh-scale, and is only limited by the tank volume. To improve the energy efficiency of the VRFB, we focus on the surface modification methods of carbon materials such as acid treatment, thermal activation, water activation, and plasma treatment, using nitrogen dopant, and modification with metal oxides or composite material. Among these studies, we report the use of simple, inexpensive, highly oxygen-vacancy-concentrated, and conductive W18O49 nanowires as catalysts to enhance the electrochemical activity of the vanadium ion redox reaction, showing the high energy efficiency and long-term stability of the VRFB.

For the dissipation of fossil fuels and strict environmental protection policies, the use of renewable energy sources such as wind and solar have rapidly increased. However, due to the intermittent nature of renewable sources, it requires energy storage systems for their efficient and timely utilization. Different technologies have been considered for this purpose; and among them, the all-vanadium redox flow battery (VRFB) has attracted interest due to their flexible power and energy design, long cycle life, and low cost. The typical VRFB employs four different oxidation states of vanadium, VO2+/VO2+ to the cathode side and V2+/V3+ to the anode side, and thus minimizes the crossover effect through the membrane. As an essential component of the cell, the electrode plays a crucial role in VRFB because it delivers the electroactive surface to conduct the vanadium redox couple. The typical electrode materials for VRFB are carbon materials such as carbon paper, carbon felt, and graphite felt. However, those pristine carbon materials show poor electrolyte accessibility and kinetic reversibility. To address these issues, various treatment methods such as electrochemical activation, acid treatment, and thermal treatment have been applied to improve the hydrophilicity and electrochemical activity of the graphite felt. We have used bamboo-like carbon nanotubes on functionalized graphite felt to improve the reversibility and the activity for the use of the VRFB [1]. To precisely control a variety of amounts of carbon functional groups on the graphite felt, we have invented two simple methods, a high-temperature water steam activation [2] and a high-temperature CO2 activation [3]. To further enhance the VRFB efficiency, we have developed metal oxide-modified graphite felt to enhance the energy efficiency of VRFB. The Nb-doped WO3 nanowires exhibit the optimal electrocatalytic activity and reversibility for the vanadium ion redox reaction [4]. By using the suitable amount and uniform distribution of Ta2O5 nanoparticles decorated on the graphite felt, the VRFB shows high stability and provides a substantial enhancement to the battery performance in a highly acidic flowing solution [5]. It was found that the optimum amount and uniformly immobilized metal oxide nanoparticles on the graphite felt surface provide the active sites, and enhance the hydrophilicity and electrolyte accessibility, thus remarkably improving the efficiency of the VRFB.

According to our previous studies, the suitable metal oxides as the catalysts for the VRFB should have several characteristics: high stability in the acid solution, earth abundance, nontoxicity, and facile preparation. We synthesized simple, inexpensive, and conductive W18O49 nanowires as catalysts on the surface of the graphite felt through the one-step hydrothermal process, followed by either argon annealing (denoted by W18O49-GF) or hydrogen/argon annealing (denoted by H-W18O49-GF) at 450°C for 2 h. Since W18O49 is a monoclinic phase with an unusual defect structure and nanometer size, it favors a strong anisotropic growth behavior along the [010] direction, forming a one-dimensional nanorod or nanowire. Due to the specific structure of W18O49, the massive surface oxygen vacancies of W18O49 not only provide the active sites for catalyzing vanadium ion redox reaction, but also enhance the electrical conductivity. After the hydrogen/argon annealing, the crystallinity of W18O49 is degraded, which is attributed to the lattice imperfection of the reduction of lattice oxygen. Besides, the increase in low oxidation states of W4+ and W5+ is likely associated with the formation of positively charged oxygen vacancies and accompanying charge-compensating electrons. Therefore, the color of H-W18O49-GF is different from that of W18O49-GF, where the former is dark blue and the latter is blue, due to the level of oxygen deficiency of H-W18O49. The VRFBs using the furnace treated graphite felt (CGF), the W18O49-GF, or the H-W18O49NWs-GF were evaluated by the charge-discharge test of 80 mA cm-2 between 0.7 V – 1.6 V, where H-W18O49NWs-GF shows not only the highest energy efficiency but also the longest discharge time. The high electrochemical performance of H-W18O49-GF is contributed by the following behaviors. First, the presence of a high amount of oxygen vacancies serves as the active sites for the vanadium ion redox reaction. Second, because of the specific one-dimensional structure, H-W18O49-GF facilitates the charge-transport channels, lowering the electrical resistance. Third, substoichiometric H-W18O49-GF enables easy diffusion of electrolytes within the composite electrode. As a result, VRFB using H-W18O49-GF as the composite electrode demonstrates a substantial improvement in efficiency and outstanding stability. 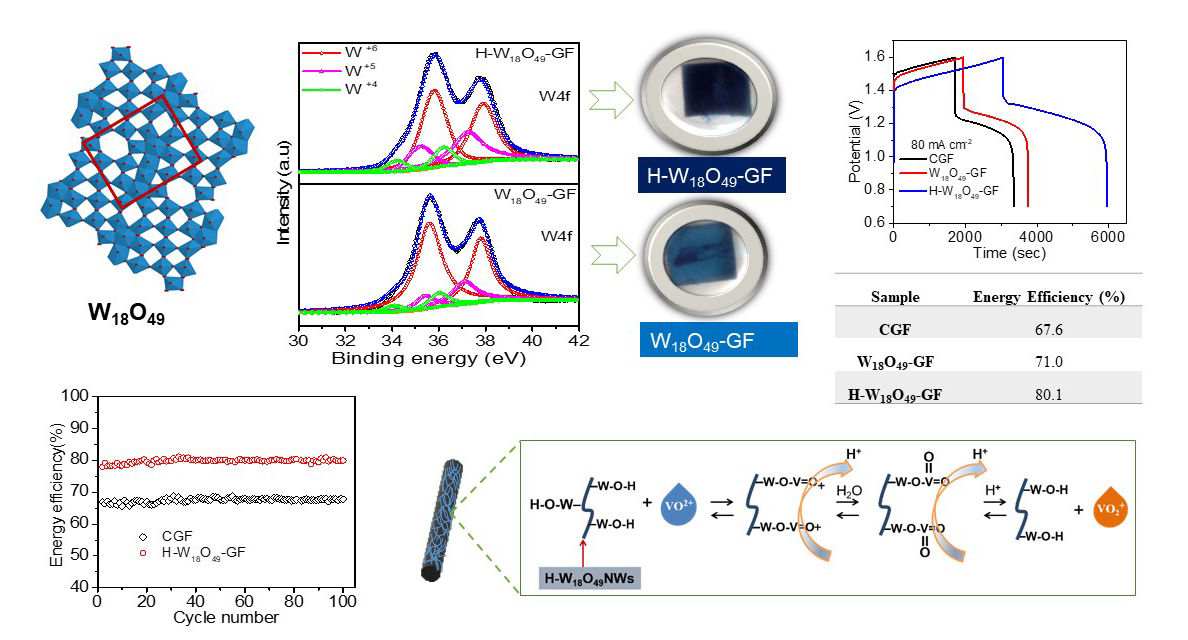