Study of Chickens, Ostriches, Sparrows, and More Reveals How Flight Feathers Are Made

:::HOME / LIFE SCIENCES / Study of Chickens, Ostriches, Sparrows, and More Reveals How Flight Feathers Are Made 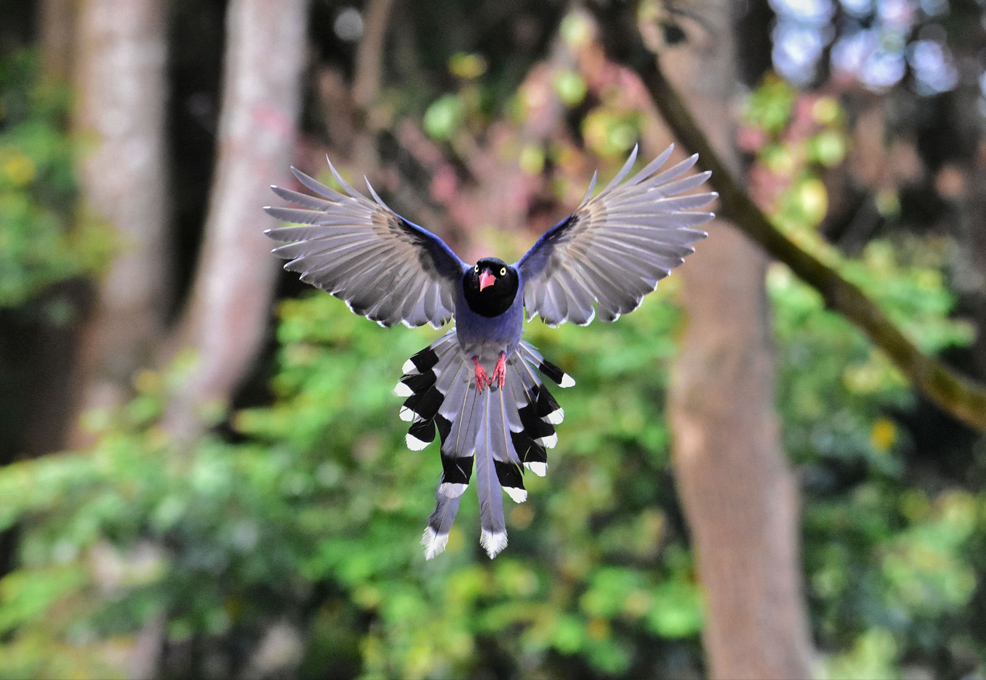 We always wonder how birds can fly and why they fly in different ways. Some soar like eagles while others require rapid flapping of wings like hummingbirds. Some birds, including ostriches and penguins, don’t fly at all. Such differences in flight styles are largely due to the characteristics of their flight feathers. We need to learn how flight feathers are made so we can understand nature better and learn principles of bioinspired architecture. To explore this field, we formed a multidisciplinary team to look at feathers in many different ways, from their biophysical properties to the underlying molecular biology that allows the formation of stem cells in the skin. We examined the feathers of flightless ostriches, short-distance flying chickens, soaring ducks and eagles, and high-frequency wing-flapping sparrows. We also studied the extremes in hummingbirds and penguins. To better understand how feathers have evolved and changed over evolutionary time, we also studied feathers that were nearly 100 million years old, which were found embedded and preserved in amber in Myanmar. Our results bring revolutionary concepts to the structure, development, and evolution of multifunctional feathers, as well as the inspiration of future composite material designs.

If you take a careful look at the feathers on a chicken, you may find many different forms within the same bird—even within a single feather. The diversity of feather shapes and functions expands when one considers the feathers of birds ranging from ostriches to penguins to hummingbirds. The differences in their flight styles are largely due to the characteristics of their flight feathers. We need to learn how flight feathers are made so we can understand nature better and learn principles of bioinspired architecture. To explore this field, we formed a multidisciplinary team to look at feathers in many different ways, from their biophysical properties to the underlying molecular biology that allows the formation of stem cells in the skin (Figure 1). 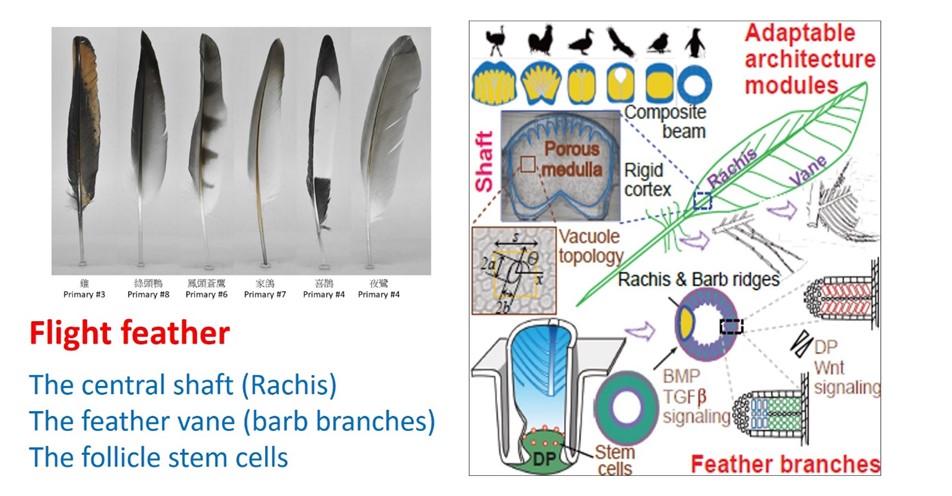 The flight feather is made of two highly adaptable architectural modules: the central shaft, or rachis, and the peripheral vane. The rachis is a composite beam made of a porous medulla that keeps feathers light, and a surrounding rigid cortex that adds strength. We developed a novel analysis, Quantitative Morphology Field (QMorF), to resolve the cellular organization in the medulla. After coarse grained measurement of the cellular size, orientation, and elongation over the entire rachis cross-section, the spatial distribution of the cellular morphology in medulla is quantitatively revealed. We discovered that the rachis is integrated quite differently in nature (Figure 2). Combining the QMorF analysis of the medulla with the geometrical and material characterizations of the cortex, we found that the rachis composite is integrated ingeniously for a simple and light medulla core with a polarized cortex reinforcement in the feathers of good flyers. The water-diving penguin even shows the extreme reinforcement of the rachis, the cortex-only configuration. We also revealed the underlying molecular signals, including Bmp and Ski, that guide the development of those design features. 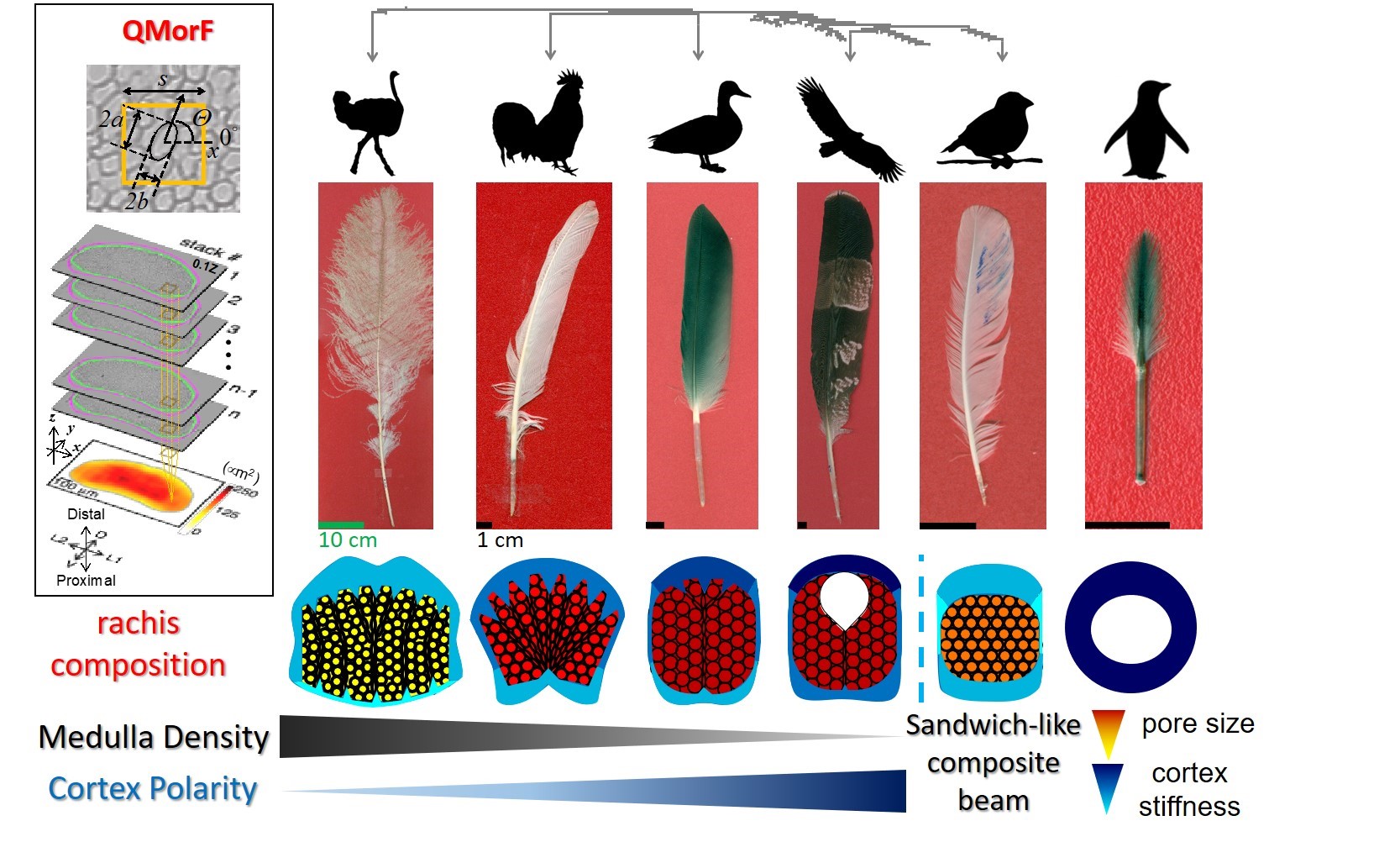 Attached to the rachis is the feather vane. The vane is the part of the feather made up of many soft barbs that zip together. Branched designs with individual barbs each bear many tiny hooklets, allowing the vane to hold together into a plane with a Velcro-like mechanism. But how do hooklets form? It has been known that vanes form from a distal pennaceous to a proximal plumulaceous shape. This process happens in the same dermal papilla complex in the bottom of the follicle. We collected follicles at appropriate times as they formed. We dissected the dermal papilla part for transcriptome analysis to identify the differentially expressed genes and signaling pathways, and further confirmed the findings with molecular biology analysis. Furthermore, we examined the barb ridges to characterize molecular expression under microscopy. We found that the asymmetric WNT signaling within the DP affects molecules expression and controls barbule cell fates for branch formation. This hypothesis was further confirmed through function studies in chicken follicles. When we put WNT beads at the anterior of the dermal papilla in growing plumulaceous feathers, the barb cells started to express pennaceous-specific molecular patterns. We can even detect some extra hooklet-like structures, which are remarkable features in pennaceous feathers. This indicates that the gradients of WNT signaling play an important role in the formation of those barbs (Figure 3). 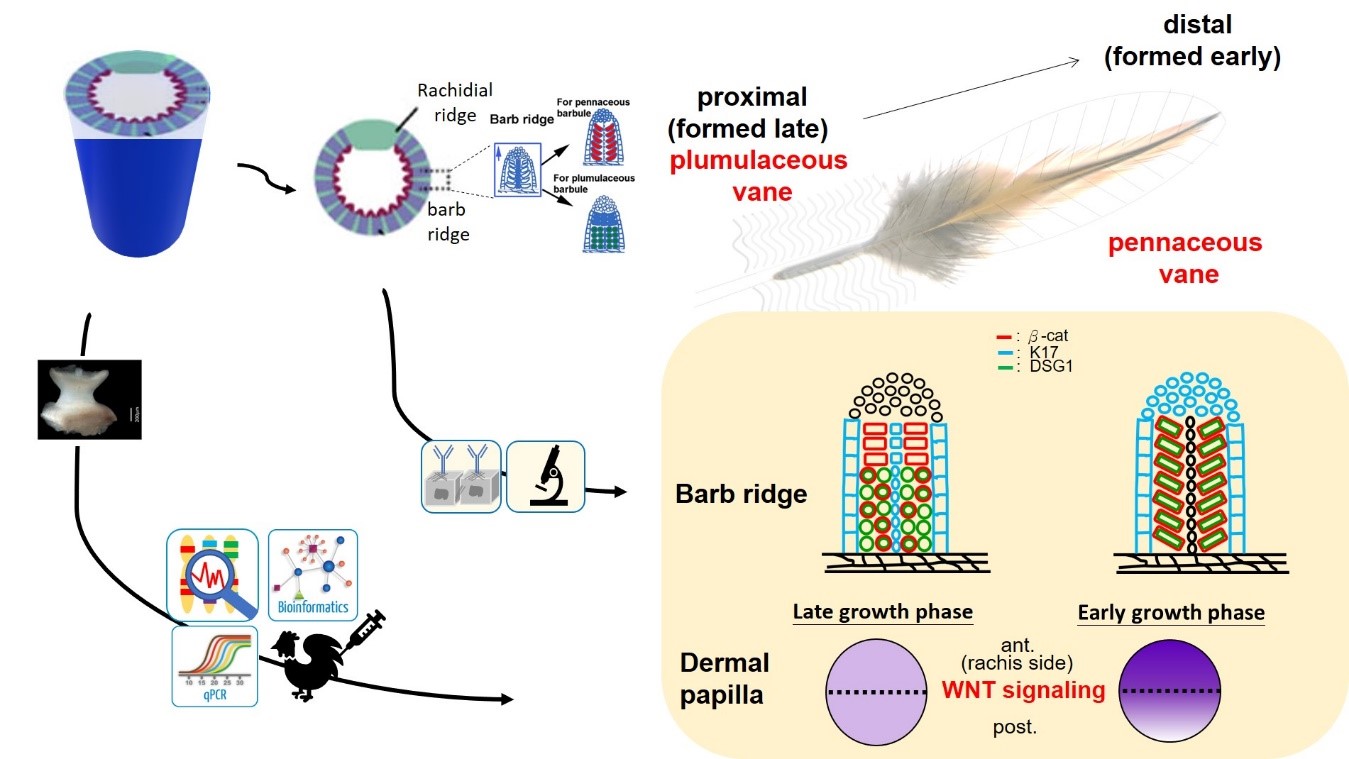 Figure 3. Molecular and cellular studies show that the dynamic asymmetrical WNT signaling within the dermal papilla modulates the differentiation of the barbule cells for adaptable architecture models.

Looking back in time, we studied recently discovered amber fossils, which allowed us to explore delicate, three-dimensional feather structures that had not been discovered before. Our studies show that ancient feathers had the same basic architecture but with more primitive characteristics. For instance, adjacent barbs formed the vane with overlapping barbules, instead of the Velcro-like, hooklet mechanism found in living birds today.

We have learned how a simple skin can be transformed into a feather, how a prototypic feather structure can be transformed into downy, contour, or flight feathers, and how a flight feather can be modulated to adapt to different flight modes required for different living environments. In every corner and at different morphological scales, we were amazed at how the elegant adaptation of the prototype architecture can help different birds adapt to different new environments.