AgriTalk: Dialog between Humans and Agriculture 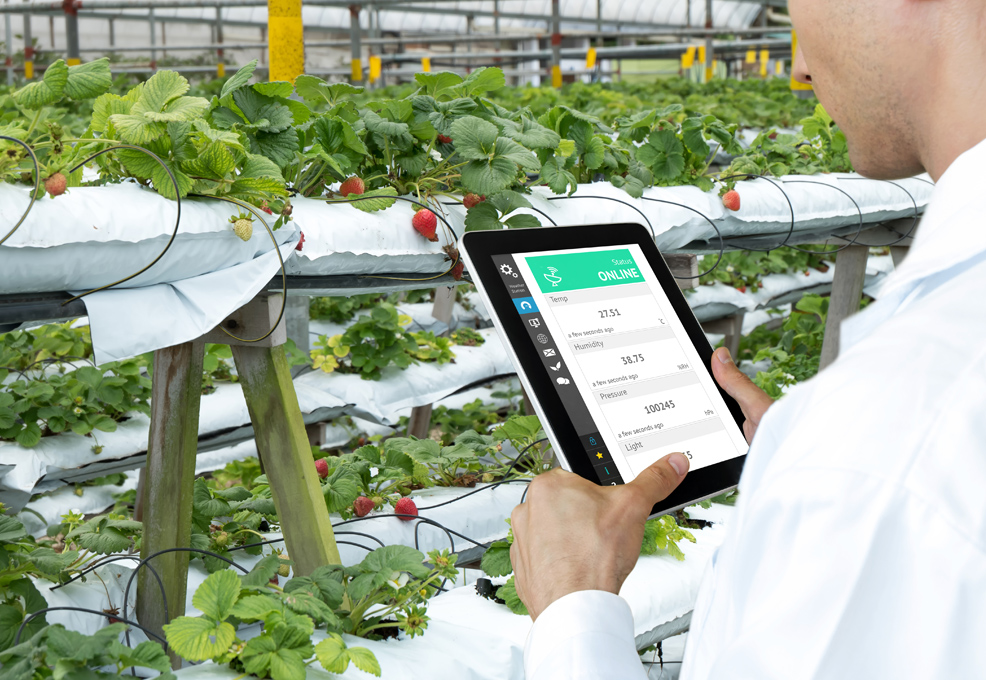 This article describes AgriTalk, an inexpensive IoT platform for precision farming of soil cultivation. We conducted experiments on turmeric cultivation, which indicated that the turmeric quality was significantly enhanced through AgriTalk. Specifically, the curcumin concentration was up to 4500-5500 mg/100g, which is 5 times more than existing products. We can intuitively configure the connections between the sensors and the actuators with the desired farming intelligence, and can effectively maintain AgriTalk for precision farming. We have conducted measurement, analytic analysis, and simulation experiments to investigate the IoT message delays of AgriTalk. Our study indicates that the delays for automatic control and automatic-manual control switching with long distances (more than 30 Km) are very short (less than 0.2 seconds) and AgriTalk can easily respond to quick and dynamic changes in the field environment conditions of soil cultivation. AgriTalk work has been published in several first-rate journals and has won several international awards.

The name “AgriTalk” originated from our belief that nature (agriculture) always passes messages to humans. However, humans cannot catch the meaning of the messages through normal perception. Therefore, we developed AgriTalk, which interprets the messages of the natural environment delivered to farmers. Previous smart farming ICT solutions are too expensive in terms of either their deployment price or maintenance costs. Thus it is difficult for farmers to appreciate or accept such ICT technologies. To resolve this issue, Yi-Bing Lin has collaborated with Professor Wen-Liang Chen to develop the sustainable solution AgriTalk that minimizes farmers’ maintenance costs in an economic way with Innovative Features and Functionalities. First, AgriTalk does not need to change sensor batteries. Second, the sensor failure is automatically detected, and can be easily calibrated in the farm fields. Third, sensor data can be sent at high frequency at up to 4 messages per minute, which allows the collection and manipulation of detailed farm information by big data and AI technologies. Fourth, the farming intelligence can be programmed directly through an arbitrary smartphone with high security. The above features are seldom found in the existing smart agriculture solutions, and are therefore highly appreciated not only by farmers but also by academia. The theory and deployment of AgriTalk have been published in several first-class ICT journals [1][2][3][4]. The IoT platform of AgriTalk was derived from the work of Yi-Bing Lin and Yun-Wei Lin on IoTtalk and ArduTalk [5][6][7]. Our approach has been successfully deployed as a Proven Solution in the commercial harvest farms in various counties in Taiwan including Hsinchu, Taoyuan, Miaoli, Tainan, and so on.  The turmeric products grown on these farms have been successfully exported to Japan and have made high profits for the farmers. In response to the request of Japanese customers, the original farming areas have been extended 10-fold in size. Since the IoT devices (sensors and actuators) in AgriTalk are developed in modules, they can be duplicated to accommodate extension of large farm areas for Scalability (see Figure 1). 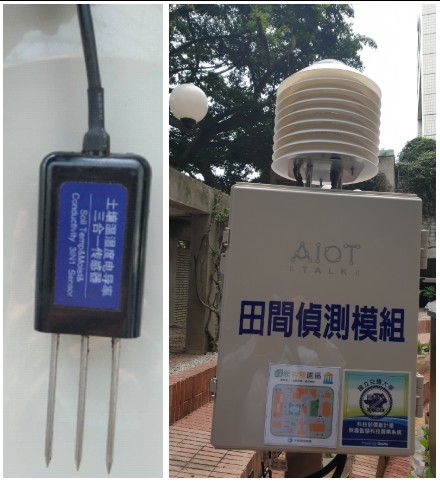 AgriTalk was successfully recognized by potential customers and venture capitalists at the Consumer Electronics Show (CES) that was held from January 8th-11th, 2019 in Las Vegas, USA. Based on the VCs, the forecast initial market value for AgriTalk is about 30 million USD, and agri-investors from around 10 countries are willing to collaborate to deploy AgriTalk in their countries. Furthermore, the team’s achievement in Silicon Valley in California was also highlighted. On January 14th, 2019, AgriTalk also won the 1st place award on Taiwan Pitch Night held by the Silicon Valley Forum. The audience of this event comprised approximately 300 representatives of various companies and venture capitalists. Many interested venture capitalists and potential partners agreed with our business model that the IoT-AI prediction system and bio-stimulators are complementary to each other, and they can foresee a future market.  The above description clearly demonstrates the Global Impact/Potential of AgriTalk, which has won the Digital Opportunity/Inclusion Merit Award of the World Information and Technology and Service Alliance (WITSA) Global ICT Excellence Awards in 2019, and has won the CES Innovation awards showcase in 2020. AgriTalk has been deployed in several countries as listed below:

(i) Taiwan: The team has applied the AgriTalk agricultural platform and A.I. prediction systems in farm fields with the cultivation of Chinese medicinal plants such as Curcuma longa, Salvia miltiorrhiza, Bletilla striata, etc. in Baoshan (寶山; Figure 2), Wufeng (五峰; Figure 3), Qionglin (芎林; Figure 4) and Nanzhuang (南庄; Figure 5), covering an area of about 8600 m2 .  The area of farm land will extend to 2 hectares in one year. 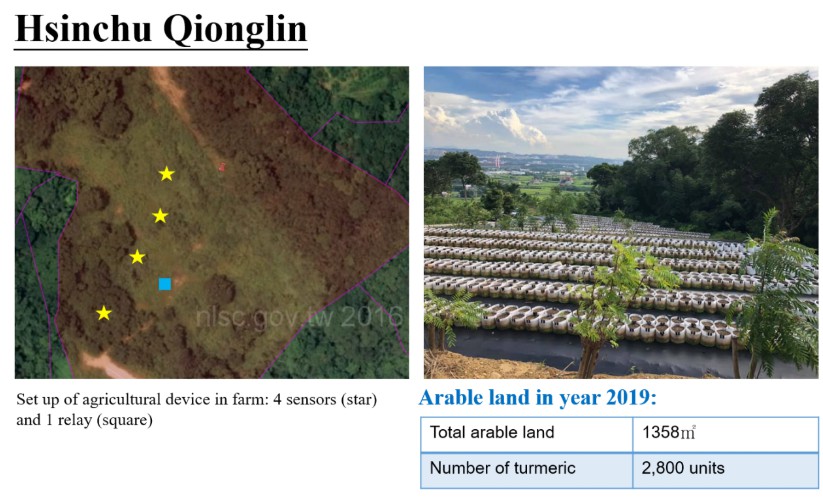 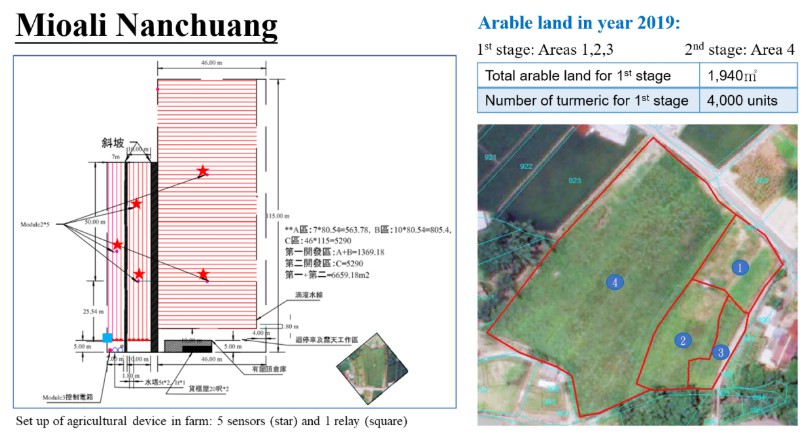 (ii) Southeast Asia: AgriTalk has been introduced to agricultural enterprises in the Philippines and Vietnam. In these countries, the promotion of this smart agricultural system is planned to be started from the buildup of demo sites to showcase the application of the system to local farmers. Figure 6 shows the AgriTalk team visiting the Philippines.

Figure 6. AgriTalk deployment in the Philippines.

(iii) United States of America: We will deploy AgriTalk in Pasadena, California, USA as shown in Figure 7.

Figure 7. AgriTalk will be deployed in Pasadena, California, USA

(iv) South Caucasus region of Eurasia: AgriTalk has been introduced to the Ministry of Agriculture in Armenia, the Armenian National Agrarian University, and a top telecommunication company (Ucom). The cooperation will start with a student and professor exchange program between Universities to deliver the knowledge of the smart agricultural system to the younger generation of Armenians, and will then further promote the application of the agricultural system in the country. Figure 8 shows AgriTalk deployment in  Armenia.