Hunting for the First Cosmic Explosions 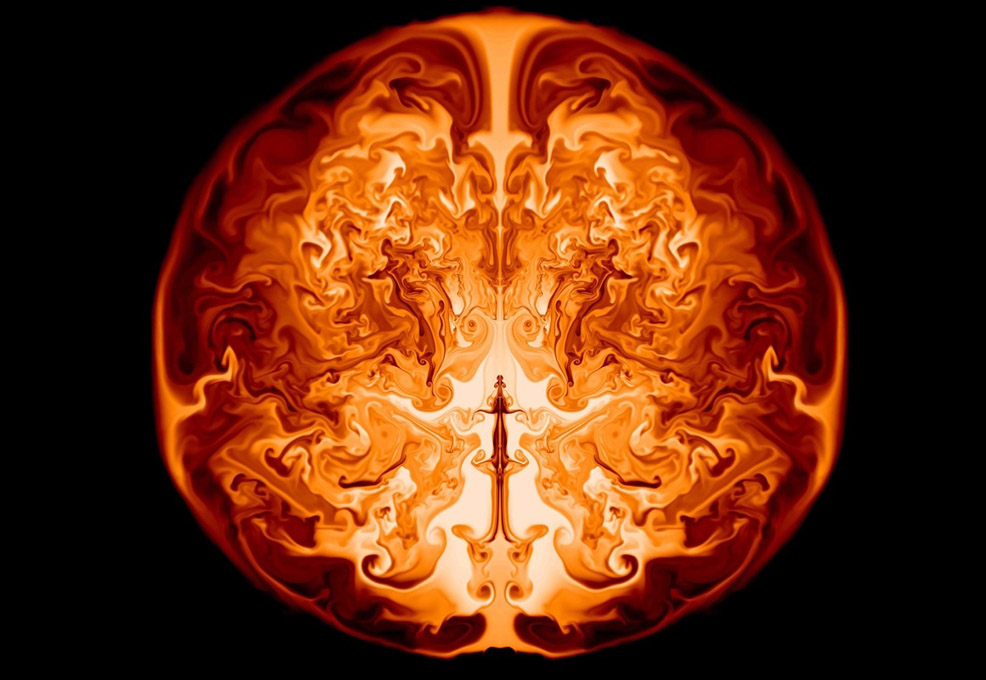 An exploding supermassive star. This two-dimensional image presents a mirrored half-slice through the interior of an exploding supermassive star of 55,500 solar masses. The size of the star is about the Earth’s orbit. In the core of the supermassive stars, nuclear burning is forging helium into oxygen and driving violent fluid instabilities that further accelerate the burning. Within a few more hours, the explosion will have released enough energy to blow up the star completely. (From: K.-J. Chen Physics Today 68, 1, 68 (2015) & K.-J. Chen et al., Astrophys. J. 790, 162, 2014)

Based on modern cosmology, only hydrogen and helium were made in the first few minutes after the universe emerged. Most of the elements necessary to life as we know it did not exist at that time. About 300 million years later, the first stars started to form and to forge for the first time the chemical elements needed for life, including carbon and oxygen, in the inferno of the stellar interior. When those stars reached the end of their life, most of them died as supernovae, some of the biggest explosions in the universe. Such an explosion was so powerful that it disrupted the entire star and ejected the newly created elements into its surroundings. Those elements later became the building blocks for our current universe and life. By studying such supernovae, we try to understand how the essential elements for life are made and how they are dispersed throughout the galaxies and end up in planets like Earth. My research is to study these first supernovae and their cosmic impacts by using the state-of-the-art simulations on some of the world's largest supercomputers.

Understanding the physics behind the primordial stars (the first stars) in the universe is a paramount area of astrophysical research. Different kinds of feedback from the primordial stars affected the evolution of their surroundings, leading to the formation of the later stars and the first galaxies. To bring the point closer to our life, most elements in the periodic table were made inside those primordial stars through nuclear fusion. Thus, the first stars play a significant role in our understanding of the cosmic evolution. However, their cosmic traces are extremely far from the earth, making them hard to observe even using the world's biggest telescopes. Modern cosmological simulations suggest that the first stars were massive, with masses around 100 – 10,000+ solar masses, and some of them would die as energetic explosions, so-called supernovae (SNe), outshining the entire galaxy. Observing the first SNe sheds a light on the study of the first stars and the early universe.

During any SN explosion, fluid instabilities are produced because the stellar structure becomes hydro-dynamically unstable, which is similar to the effects of stirring a fire or blowing air into a hot grill. The resulting mixing of the supernova ejecta can significantly affect their observables. Fluid instabilities frequently happen in daily life. For example, if we put heavy dyed water on top of lighter pure water, the interface becomes unstable, and the dyed water starts to sink into the pure water as illustrated in Figure 1. Such instabilities are Rayleigh – Taylor instabilities, which come from the result of moving fluids passing each other. The movement cannot be modeled in only one dimension, such as from some height above the bottom of the glass; different fluids and fluid motions may stay at the same height. Therefore, additional dimensions, perpendicular to height, that is 2D/3D, are required to describe and to model such instabilities. Before my work, the theoretical models for the first SNe were based on one-dimensional simulations. My research was the pioneering work that studied the instabilities in the first SNe using two- and three-dimensional hydrodynamic simulations. My goal was to predict realistic observational signatures for these events that can be utilized by current and forthcoming observatories. In the following paragraph, I will briefly explain one of my previous works.

Theoretical models suggest that the supermassive black holes at the center of most massive galaxies today could originate from the first supermassive stars with masses greater than 10,000 solar masses, most of which collapse directly into black holes. Previous stellar evolution models showed that primordial stars over 300 solar masses simply collapse into black holes. But my collaborators and I have discovered that some supermassive stars do not die quietly. Those in a narrow window with masses around 55,000 solar masses can explode in the most energetic thermonuclear explosions in the universe (see K.-J. Chen Physics Today 68, 1, 68 (2015), and K.-J. Chen et al., Astrophys. J. 790, 162, 2014 for details). Unlike normal SNe, the explosions of supermassive stars are triggered by general relativistic instabilities that begin during central helium burning, which leads to a runaway collapse of the core that ignites explosive helium burning, as shown in Figure 2. The energy released can be up to 10,000 times the energy of a normal SN. These cataclysmic events completely unbind the star and indeed destroy the protogalaxies that gave birth to them.

The first SNe will help scientists answer the most important questions as to how the cosmic dark age ended when these first stars reformed the simple early universe into a state of ever-increasing complexity.  Rigorous efforts are needed to refine models to achieve the level of sophistication that will offer robust predictions for these forthcoming facilities. The primary goal of our current research is to make a timely contribution to push the model frontiers of the first supernovae and provide theoretical support for the next generation of extremely large telescopes.

Figure 1: When a heavy fluid (orange) is layered on top of a lighter fluid (transparent), a hydrodynamic instability develops. Similar processes occur inside supernova explosions. (provided by James Riordon)

Fig 2: An exploding supermassive star. This two-dimensional image presents a mirrored half-slice through the interior of an exploding supermassive star of 55,500 solar masses. The size of the star is about the Earth’s orbit. In the core of the supermassive stars, nuclear burning is forging helium into oxygen and driving violent fluid instabilities that further accelerate the burning. Within a few more hours, the explosion will have released enough energy to blow up the star completely. (From: K.-J. Chen  Physics Today 68, 1, 68 (2015) & K.-J. Chen et al., Astrophys. J. 790, 162, 2014)