Things You Have to Know About Tropical Cyclone (TC): Competitions of ENSO and ISO in Modulating TC Activity

:::HOME / NATURAL SCIENCES / Things You Have to Know About Tropical Cyclone (TC): Competitions of ENSO and ISO in Modulating TC Activity 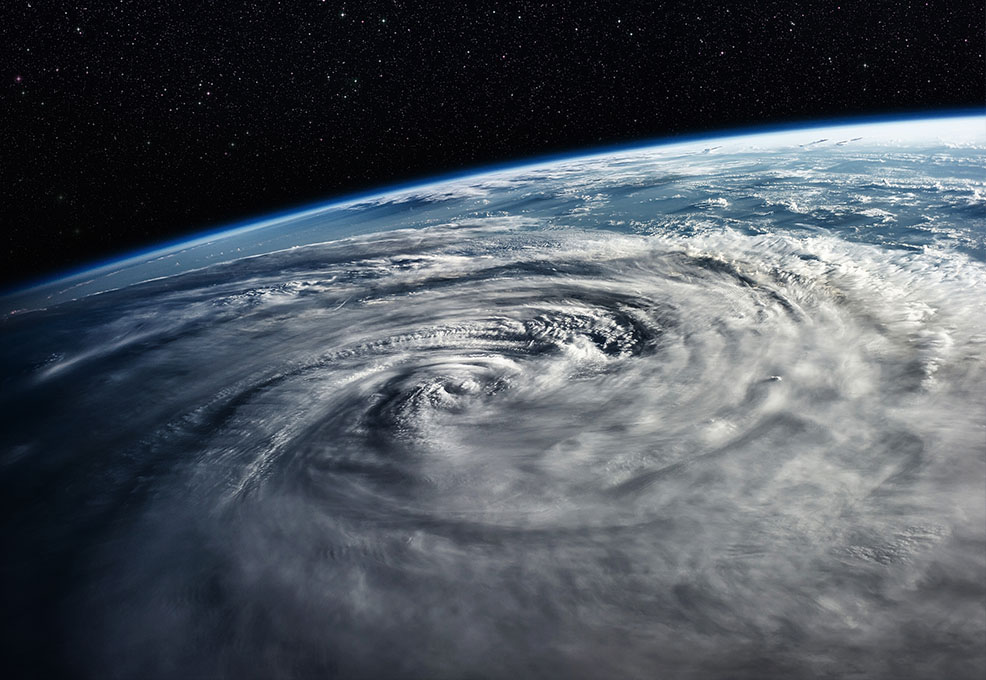 Tropical cyclones (TCs) often cause significant disasters in the Asian-western North Pacific (WNP) region. Although each TC event seems to be independent of the other, the overall TC activity has been found to be systematically modulated by large-scale climate variability, such as intraseasonal oscillation (ISO) and El Niño-Southern Oscillation (ENSO). The relative roles of these two climate variability features vary in different aspects of TC activity. Regarding the TC genesis rate, enhanced TC genesis tends to extend eastward into the eastern section of the WNP in El Niño years, but is constrained in the western section during La Niña years. ISO tends to cause a southeastward (northeastward) extension of enhanced TC genesis during its active (inactive) phase. Overall, ENSO exerts more dominant impacts than ISO in determining the patterns of TC genesis. Regarding TC rainfall, ENSO is more influential in affecting TC movement and frequency from the tropical WNP toward the Taiwan region. Interannual variability of summer TC rainfall near Taiwan is more affected by ENSO than by ISO. Regarding TC movements from the WNP into the South China Sea, ENSO and ISO contribute in-phase effects in modulating TC entrance during La Niña years. In El Niño years, ENSO plays a decisive role in years with reduced TC entrance, but ISO becomes more important in years with enhanced TC entrance.

Tropical cyclone (TC) events normally intensify rapidly from a tropical disturbance and vanish quickly with a lifetime of less than 2 weeks. There is a general impression that each TC is an individual case and independent of others. However, as viewed from a longer timescale, say, monthly or seasonal, gross TC activity does show some recognized patterns. For example, in 2018, TCs in the western North Pacific (WNP) kept moving northward toward Japan, while Taiwan, on the western side, was almost unaffected. In August 2014, TCs were absent from the WNP for the entire month. These longer-timescale variability features suggest possible modulations of TC activity by large-scale background climate variability. Two salient climate variability features in the WNP that can effectively modulate TC activity appear as the El Niño-Southern Oscillation (ENSO) and the intraseasonal oscillation (ISO). The former is an interannual mode with a period of 2-7 years, while the latter is an intraseasonal mode with a period of 20-90 days. It is of interest to explore the competitive roles of ENSO and ISO in the modulating processes of TC activity.

For interannual variability of summer TC rainfall (TCR), more TCR near Taiwan was found to associate with more TC movements into this region. That is caused by more TC genesis in the tropical WNP under cyclonic anomalies induced by an El Niño-like warm sea surface temperature (SST) anomaly in the tropical eastern Pacific. The formed TCs later move along the cyclonic anomaly northwestward to affect Taiwan. Meanwhile, ISO also propagates from the tropical WNP northwestward toward the Taiwan region. This propagation provides a positive condition to guide TC movements following its path, leading to more TCR in Taiwan. Statistical analyses show that ENSO plays a more important role than ISO in the modulating processes by causing stronger magnitudes and more coherent interannual variability of TCR. 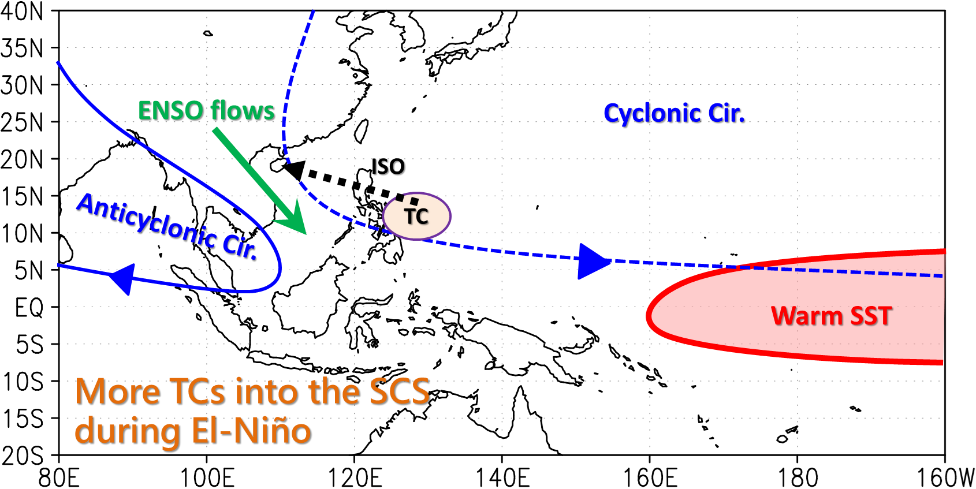 The comparisons in the relative roles of ENSO and ISO exhibit a crossing-timescale interaction between interannual and intraseasonal variability. Such comparisons related to TC modulating processes across different timescales have not been comprehensively delineated for many aspects of TC activity. Our studies provide new research approaches for examining the detailed climate features of TC activity. These analyses can identify key climate variability features to monitor, as well as predict, TC activity for the WNP, the SCS, and East Asia. The analysis results can serve as guidance to improve TC forecasts in the aspects of TC genesis and movements, with an extension into TC rainfall.
RELATED