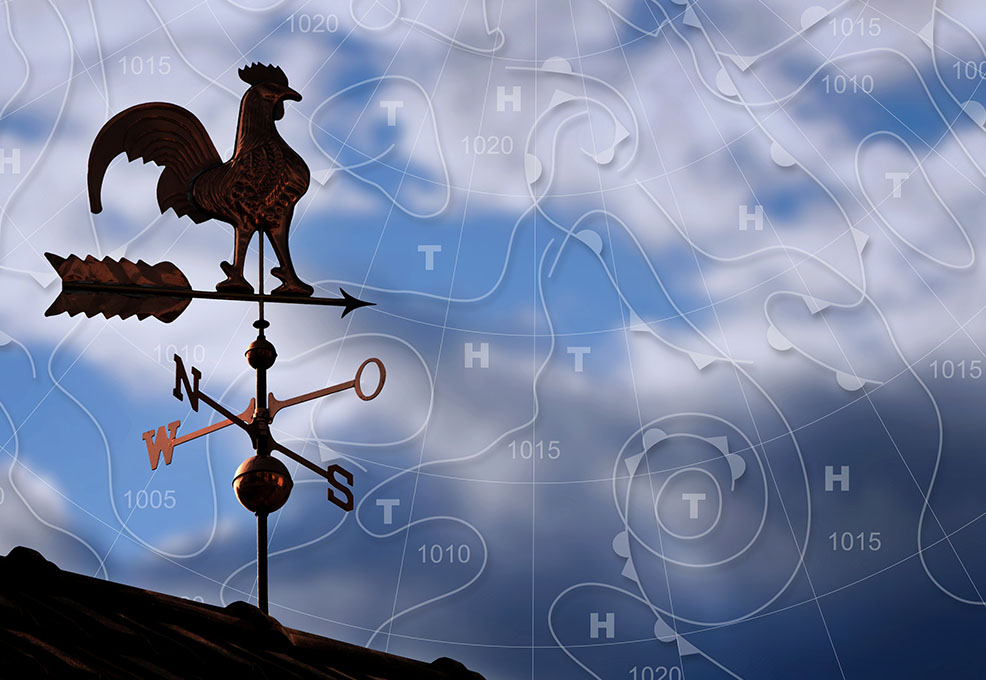 Will severe typhoon frequency increase in the future? This interesting scientific issue and an important economic and social topic for Taiwan and Asian coastal communities rely on climate model performance skills. Unfortunately, most of the low-resolution climate models that are used to predict typhoons on a climate timescale underestimate typhoon frequency and typhoon intensity. To reduce the uncertainty due to climate model bias, the High-Resolution Atmospheric Model (HiRAM), originally developed by the Geophysical Fluid Dynamics Laboratory (GFDL) is adopted by the Taiwan climate research group to simulate TC activities in the western North Pacific (WNP) on climate timescales with horizontal resolutions of 23 km.

Typhoon activities over the WNP and Taiwan/East Coast of China (TWCN) region are well simulated by HiRAM at a 23-km resolution. The Typhoon landfall frequency in the TWCN region is predicted to significantly decrease in the future. However, the frequency and mean rainfall rate of severe typhoons within TWCN is predicted to increase in a future warmer-climate scenario.

What is the role played by humans in typhoon climate change? The Cloud-Resolving Storm Simulator (CReSS) of Nagoya University, Japan with super high resolution of 3 km was used to conduct two experiments with and without the 20–year mean anthropogenic forcing for 1985-2005. With this mean anthropogenic forcing included, Morakot’s maximum rainfall increased by 6.5% on the day of the flood–August 8. Thus, the maximum rainfall associated with typhoons is expected to significantly increase with the growth of human-produced global warming. 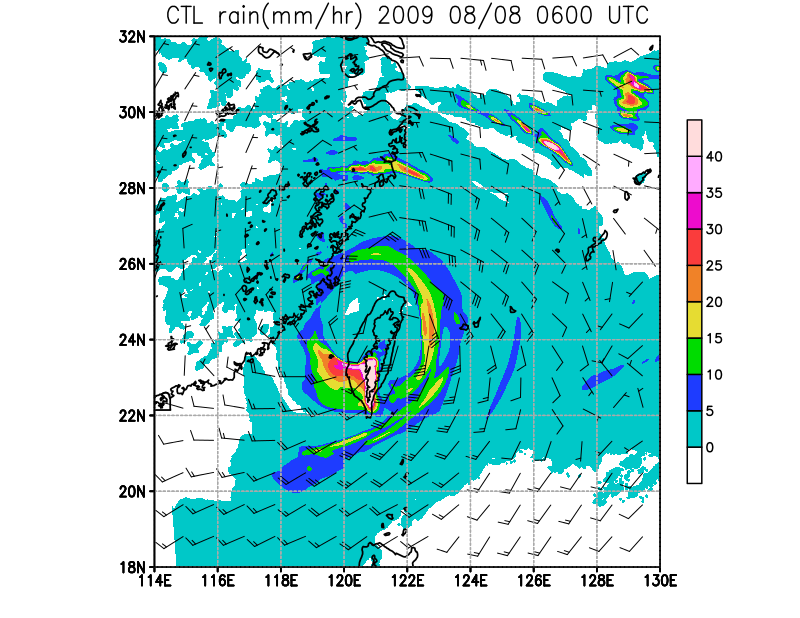 Will “severe” typhoon frequency increase in the future?
Will severe typhoon frequency increase in the future? To answer this important and interesting question, we need to know the method to predict typhoons in the future. Similar to numerical weather prediction, global climate models are developed and integrated on climate timescales to predict typhoons in the future climate. Yet, are these climate models accurate? Unfortunately, most of the low-resolution climate models underestimate typhoon frequency and typhoon intensity in the western North Pacific (WNP). Increasing horizontal resolution is proposed to improve typhoon climate simulation. However, long-term integration from the traditional global spectrum climate models requires huge computational resources. High resolution global model integrations with resolutions of at least 50 km on climate timescales have seldom been performed until recently. The High-Resolution Atmospheric Model (HiRAM) utilizing a finite-volume cubed-sphere dynamic core is adopted by the Taiwan climate research group to simulate tropical cyclone (TC) activities on climate timescales with a horizontal resolution of 23 km. This model was originally developed by the Geophysical Fluid Dynamics Laboratory (GFDL) located in Princeton University and funded by the National Oceanic and Atmospheric Administration (NOAA) in the USA.
The uncertainty of typhoon climate prediction is greatly reduced by using HiRAM at a 23-km resolution. The spatial distribution of typhoon formation frequency and gross features of the monsoon trough, the subtropical high and convergence region are well simulated by the model. Most simulated and observed typhoons are formed in the monsoon trough and low-level convergence region. Compared to the present time, the monsoon trough is predicted to weaken in the future warmer-climate scenario. Accompanied by this weakening of the monsoon trough, typhoon genesis frequency is also predicted to decrease in the future, despite the fact that SST warming and moisture increasing in a warmer-climate scenario provide a favorable condition for typhoon formation.
While typhoon genesis frequency over the WNP is predicted to decrease significantly, the storm intensity and maximum precipitation rate are predicted to increase under global warming. The frequency of Category 4 (maximum wind speed of 225-279 km/h) typhoons is predicted to increase in the future. In addition, HiRAM may underestimate the number of Category 5 (maximum wind speed greater than 280 km/h) typhoons in the future, since the 23-km resolution is inadequate to simulate Category-5 typhoons.

Figure 2. Averaged maximum typhoon rainfall rate within 200 km of the storm center for all typhoons affecting the TWCN region (Adapted from https://doi: 10.3319/TAO.2016.06.13.04)
The observed typhoon maximum rainfall rate within the TWCN generally possesses an asymmetric structure with heavier rainfall over the southwest quadrant. The typhoon rainfall within the TWCN region may be strongly influenced by large-scale southwesterly flow. The 23-km HiRAM captures the spatial distribution of rainfall with heavier rainfall over the southern part of the typhoon circulation (Fig. 2). The mean rainfall rate within 200 km of typhoons within the TWCN region is predicted to increase significantly (Fig. 2). Thus, both Taiwan and China coastal communities will be affected by increasingly severe heavy rainfall associated with typhoons in the future.
Nature Variability or Human Impacts
Typhoon Morakot (2009) produced record-breaking rainfall in Taiwan since 1958. How much of Typhoon Morakot’s extreme rainfall can be attributed to human activities? To address this question, we conducted two numerical experiments to simulate Typhoon Morakot with two different climate backgrounds. One experiment simulated Typhoon Morakot in the current climate background that includes both natural and anthropogenic forcing, while the other simulated Morakot in a climate background with only the natural forcing. In the latter, the mean anthropogenic forcing during 1985-2005 (in 20 years), as estimated from a group of climate models, was subtracted from the current climate background. The Cloud-Resolving Storm Simulator (CReSS) of Nagoya University, Japan with super high resolution at a grid size of 3 km was used to conduct the experiments, since HiRAM with a 23-km resolution is unable to simulate Category 5 typhoons.
Compared to the experiment without anthropogenic forcing, Morakot’s overall rainfall is enhanced by 2.5–3.6% within a radius of 300–500 km from the storm center. The maximum rainfall increased by 6.5% on the day of the flood–August 8 with the anthropogenic forcing in the current climate. Suppose the anthropogenic forcing continues to grow, the maximum rainfall is expected to significantly increase with global warming.
RELATED