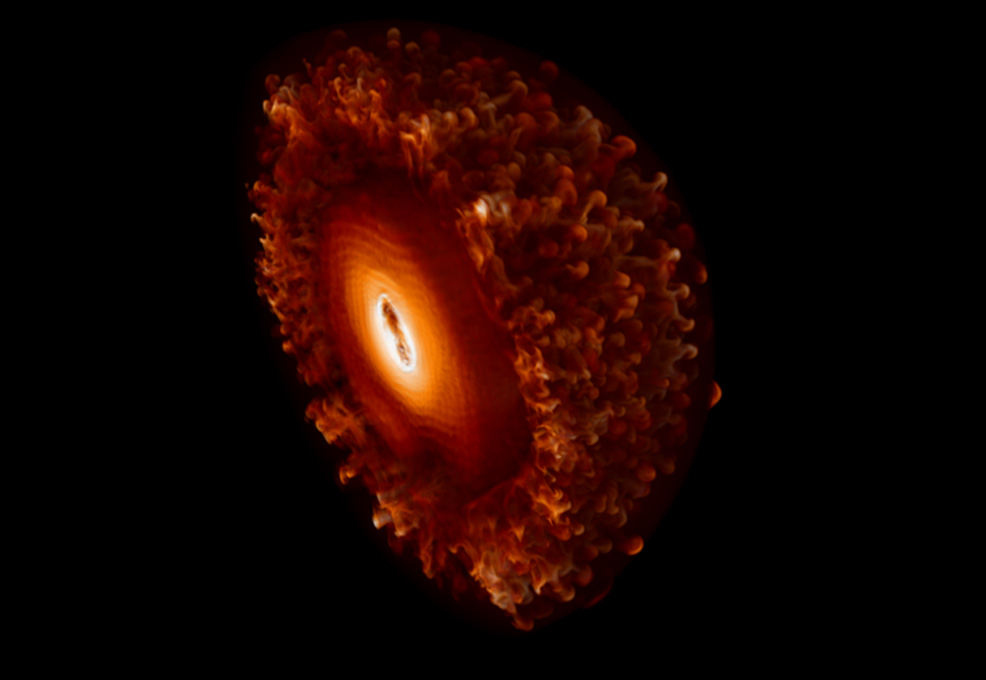 A rapidly spinning magnetar in a young supernova (SN) can produce a superluminous transient by converting a fraction of its rotational energy into radiation. Here, we present the first three-dimensional hydrodynamical simulations ever performed of a magnetar-powered SN in the circumstellar medium formed by the ejection of the outer layers of the star prior to the blast. We found that hydrodynamical instabilities form on two scales in the ejecta, not just one as in ordinary core-collapse SNe: in the hot bubble energized by the magnetar, and in the forward shock of the SN as it plows up ambient gas. Pressure from the bubble also makes the instabilities behind the forward shock more violent, and causes more mixing in the explosion than in normal SNe, with important consequences for the light curves and spectra of the event that cannot be captured by one-dimensional models. 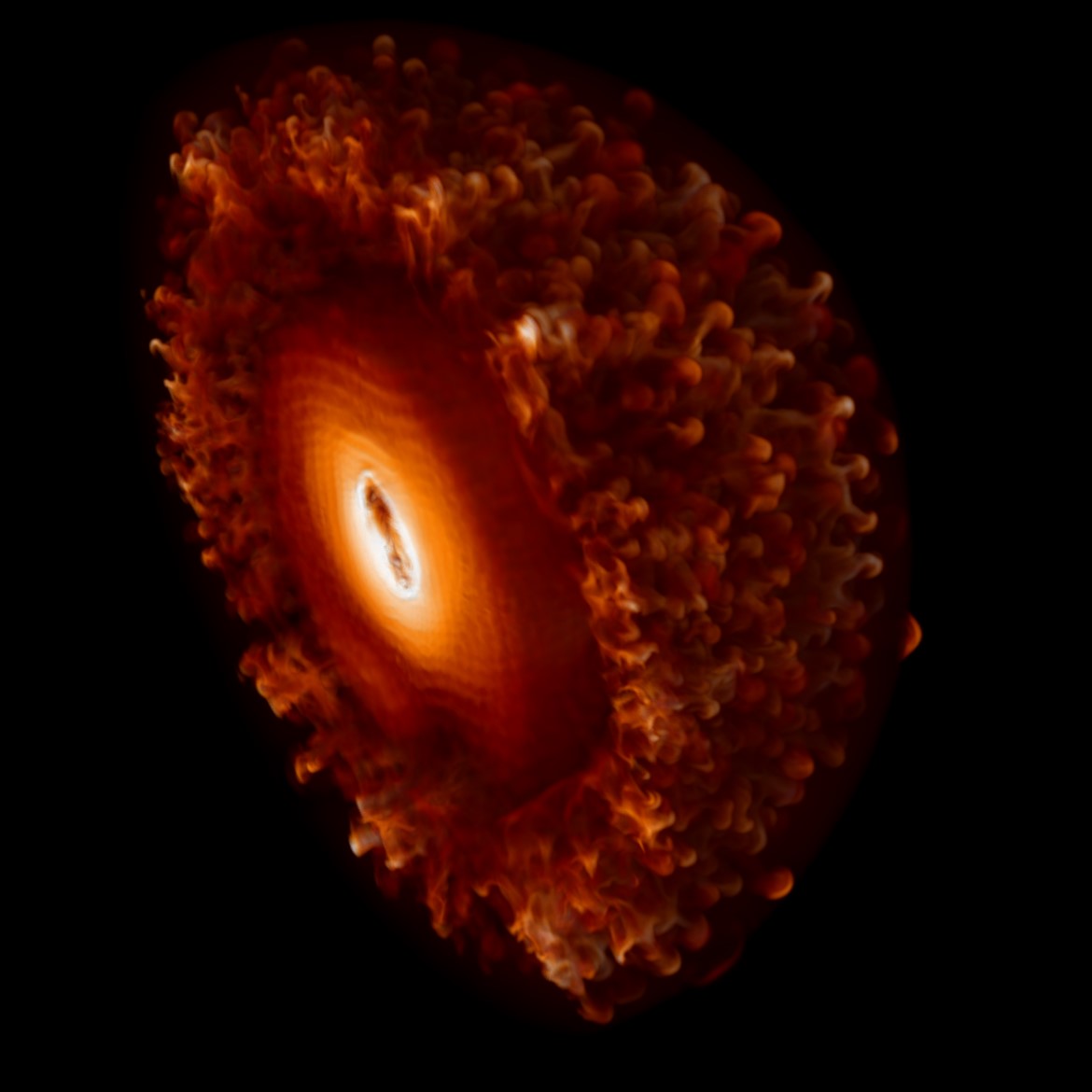 The nebula phase of the magnetar-powered super-luminous supernova from our 3D simulation. At this moment, the supernova ejecta has expanded to a size similar to the solar system. Large-scale mixing appears at the outer and inner regions of the ejecta. The resulting light curves and spectra are sensitive to the mixing that depends on the stellar structure and the physical properties of the magnetar. (Image by Ken Chen)

Supernovae are the grandest explosions of the universe and a frontier topic in modern astrophysics with immense scientific richness for theoretical and observational explorations. New SNe searches are revealing new astrophysical explosions in unprecedented numbers, and are revolutionizing our understanding of SNe. Recent discoveries of superluminous supernovae, which are about a hundred times more luminous than typical supernovae, are violently challenging our knowledge of their progenitors, explosion mechanisms, and ambient environments. Previous studies have shown that the radiation emitted by a rapidly rotating magnetar embedded in a young supernova can greatly amplify its luminosity. The same studies have also revealed a shortcoming in the one-dimensional models. Fluid instabilities occur in our daily life. For example, if you place heavy dyed water on top of lighter tap water, this interface is unstable and the dyed water tends to sink into the tap water. The resulting instability can be demonstrated with common household equipment. Having such instabilities requires one fluid to move "past" the other; hence, they cannot be well described using just one dimension like height above the bottom of the glass; different fluids and fluid motions could be at the same height. Therefore, a second or third dimension, perpendicular to height, is required to describe, and simulate, such instabilities. Since the rapidly rotating magnetar deposits energy comparable to the kinetic energy of the slower moving ejecta of the original supernova, the deposition has consequences not only for the brightness of the supernova but for its dynamics as well.

We present the first three-dimensional hydrodynamical simulations ever performed of a magnetar-powered supernova with the most powerful supercomputers in the world. This work simulates the supernovae remnant of size ~ 100 AU. However, the size of the neutron star is just 10 km. It requires an extreme resolution to model this system, which proposes a grand technical challenge for astrophysicists. We are able to overcome this issue with the new numerical scheme I developed to successfully perform these simulations. These simulations also need a lot of computational resources of several million hours, and are only achievable by using the most powerful supercomputers in the world (located at National Energy Research Center (NERSC), at the Berkeley National Laboratory.).

We found that hydrodynamical instabilities form on two scales in the ejecta, not just one as in ordinary core-collapse supernovae: in the hot bubble energized by the magnetar and in the forward shock of the SN as it plows up ambient gas. Both fluid instabilities cause more mixing in the explosion than in normal SNe, with significant consequences for the light curves and spectra of the event that cannot be captured by one-dimensional models. We also found that the magnetar can accelerate elements of Ca and Si to velocities of 12,000 km/s, which accounts for their broadened emission lines in observations. Our simulations further reveal that energy from even weak magnetars can accelerate iron-group elements deep in the ejecta to 5000 - 7000 km/s. This acceleration mechanism by the central pulsar naturally explains the high-velocity Fe observed at early times in some core-collapse supernovae such as SN 1987A, which is a long-standing question in astrophysics. 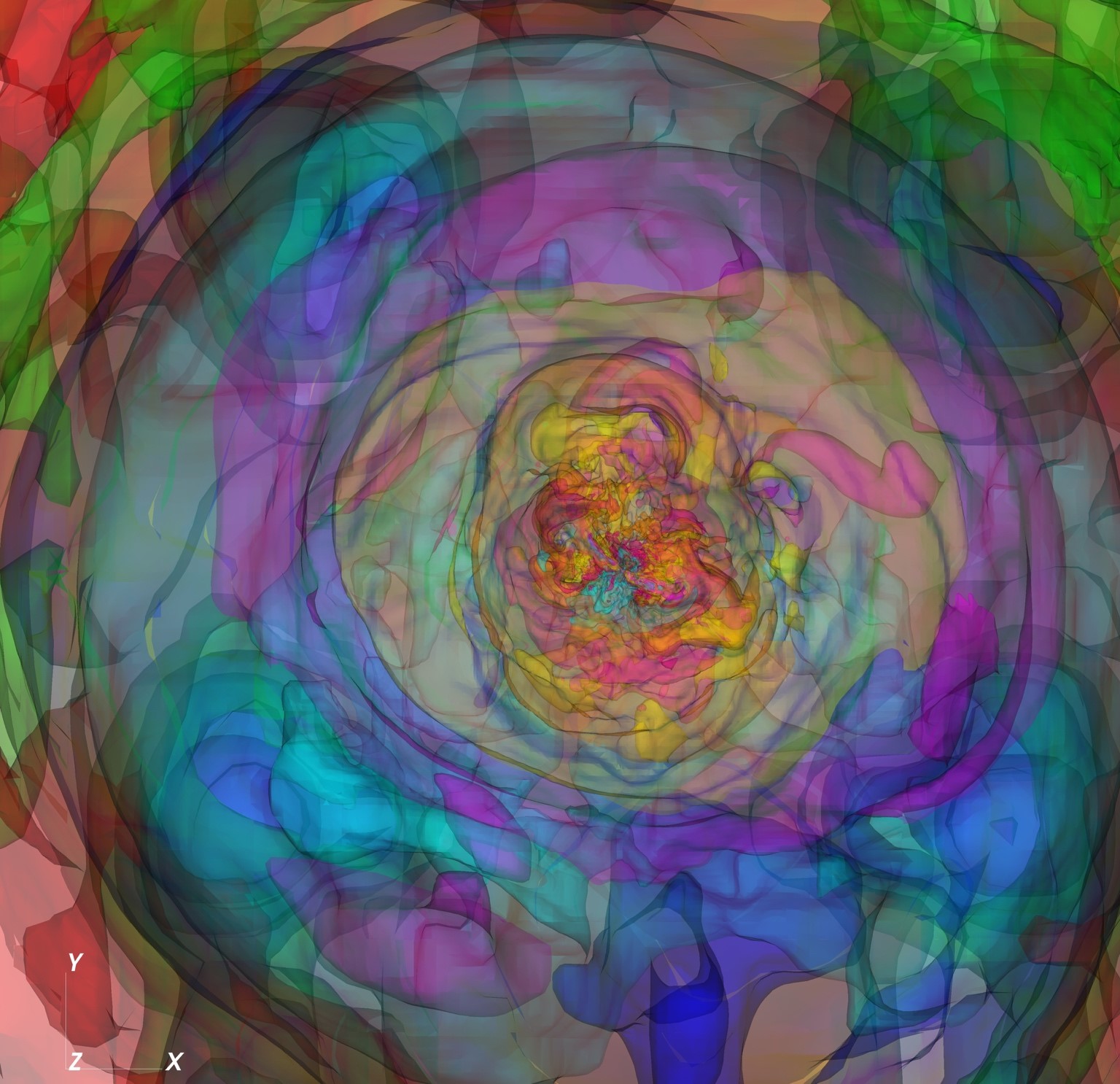 The turbulent core of a magnetar bubble inside the superluminous supernovae. The color coding shows the densities. The magnetar is located at the center of this image, and two bipolar outflows are emitted from it. The physical size of the outflow is about 10,000 km. (Image by Ken Chen) 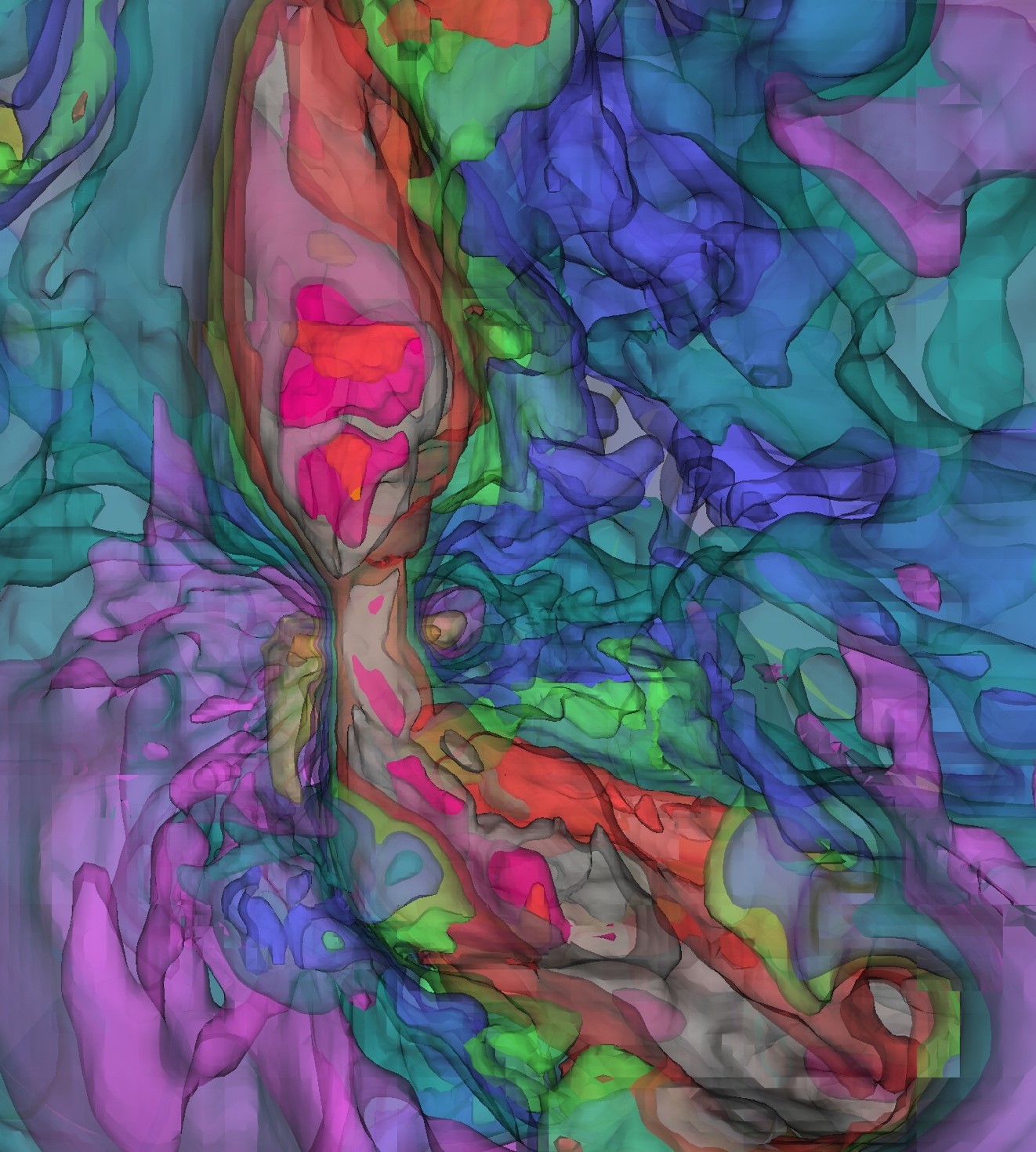 Turbulent core of the magnetar bubble inside the superluminous supernovae. Color coding shows the densities. The magnetar is located at the center of this image. Strong turbulence is caused by the radiation from the central magnetar. (Image by Ken Chen)