A brief analysis of the US-China tech war

Since 2018, the US has adopted various measures against the People’s Republic of China (PRC), including increasing tariffs, designating the PRC as a currency manipulator, sending military ships to the South China Sea, conducting joint military exercises with allies, and adding some Chinese technology firms (such as Huawei) to the entity list so as to restrict technology exports. As technology has increasing impacts on industry and the economy, society and national defense, the research and development (R&D) of science and technology (S&T) has become a critical issue.

PRC President Xi’s speech arguing about China’s mightiness on Oct. 18, 2017 can be understood as the beginning of the recent US-China tech confrontation (Fig. 1). The argument was probably deemed by the US as an alert of China’s ever-faster developments of S&T. The US, in 2018, rapidly reacted by restricting China’s purchase of equipment components and technologies from the US with the “entity list.” In December 2019, the participating States of the Wassenaar Arrangement added new items to the export restrictions list, preventing China from acquiring crucial semiconductor manufacturing equipment, e.g., ASML’s extreme ultraviolet lithography machines. The White House later in October 2020 announced a “National Strategy for Critical and Emerging Technologies (C&ETs),” demanding that future innovations should be national security-based to protect the US’s technology advantage. On the other hand, China, trying to counteract the US’s deeds, issued the “Rules on Unreliable Entities’ List” and amended its Export Control Law in September and October of 2020.

Fig. 1 The timeline of the US-China tech confrontation

Comparison of US and China S&T inputs and outputs

But why did China’s S&T developments raise concerns for the US? The following S&T input and output figures give us a hint. Fig. 2 compares gross domestic expenditures on R&D of the government and enterprise sectors of the US and China (S&T inputs) from 2014 to 2018, which reveals a constant increase in the case of China in both sectors. While China’s R&D expenditure in the government sector was still much lower than that of the US, because of (1) heavy reliance on human capital for R&D activities, and (2) China’s lower labor costs, China’s costs per unit of R&D have been much lower than those of the US. In terms of the enterprise sector, China’s R&D expenditures were almost on a par with the US’s in 2018. Given the aforementioned differences in R&D costs, to the US the threat from China’s enterprises is real. 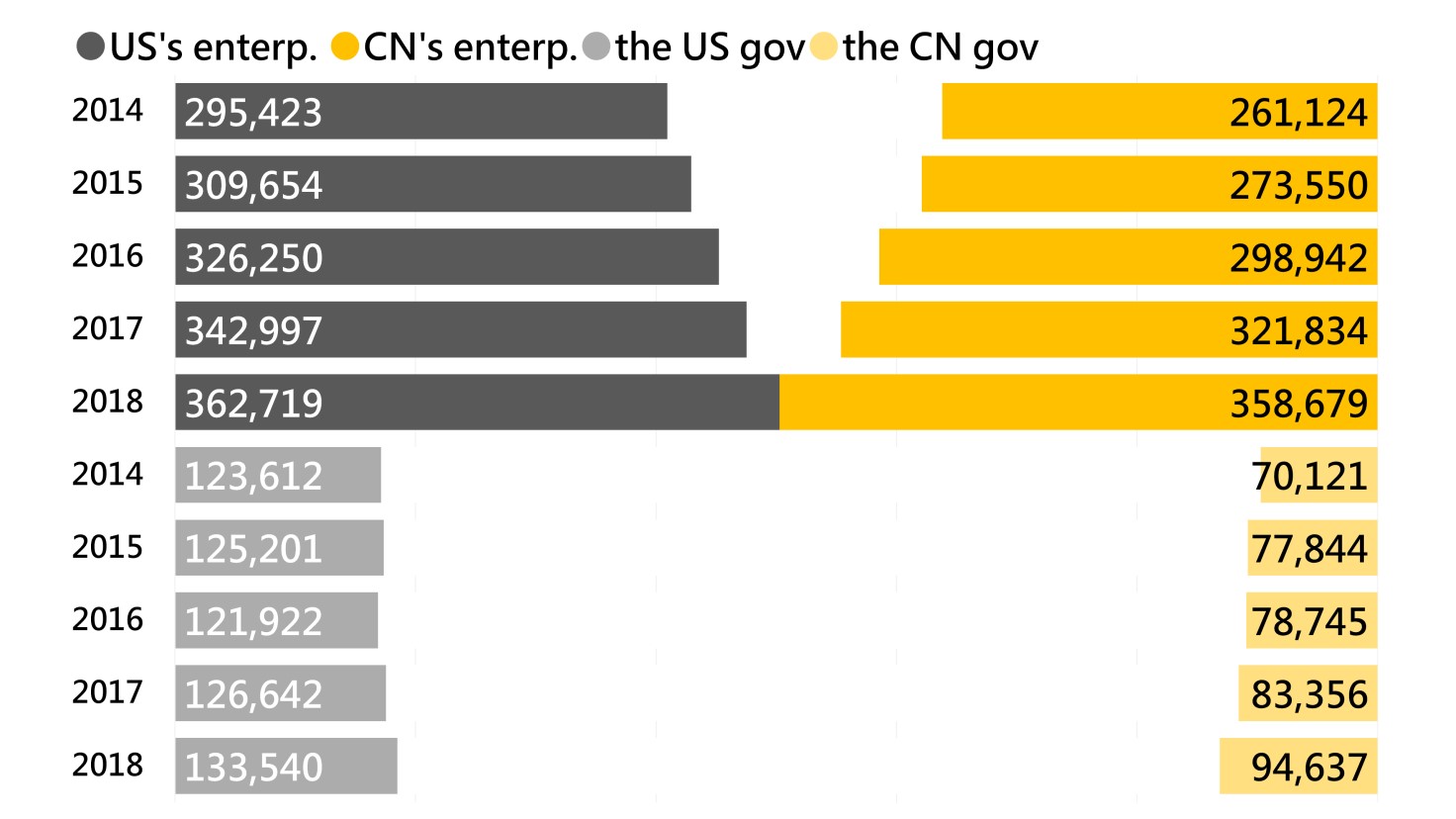 Highly-cited papers published in scientific journals are often used as an indicator of S&T outputs. As shown in Fig.3, from 2010 to 2019, the number of highly-cited papers from the US increased from 6,413 to 7,926, whereas those from China increased sharply from 1,210 to 7,152. The US won, but only by a nose, and hence the sense of crisis. 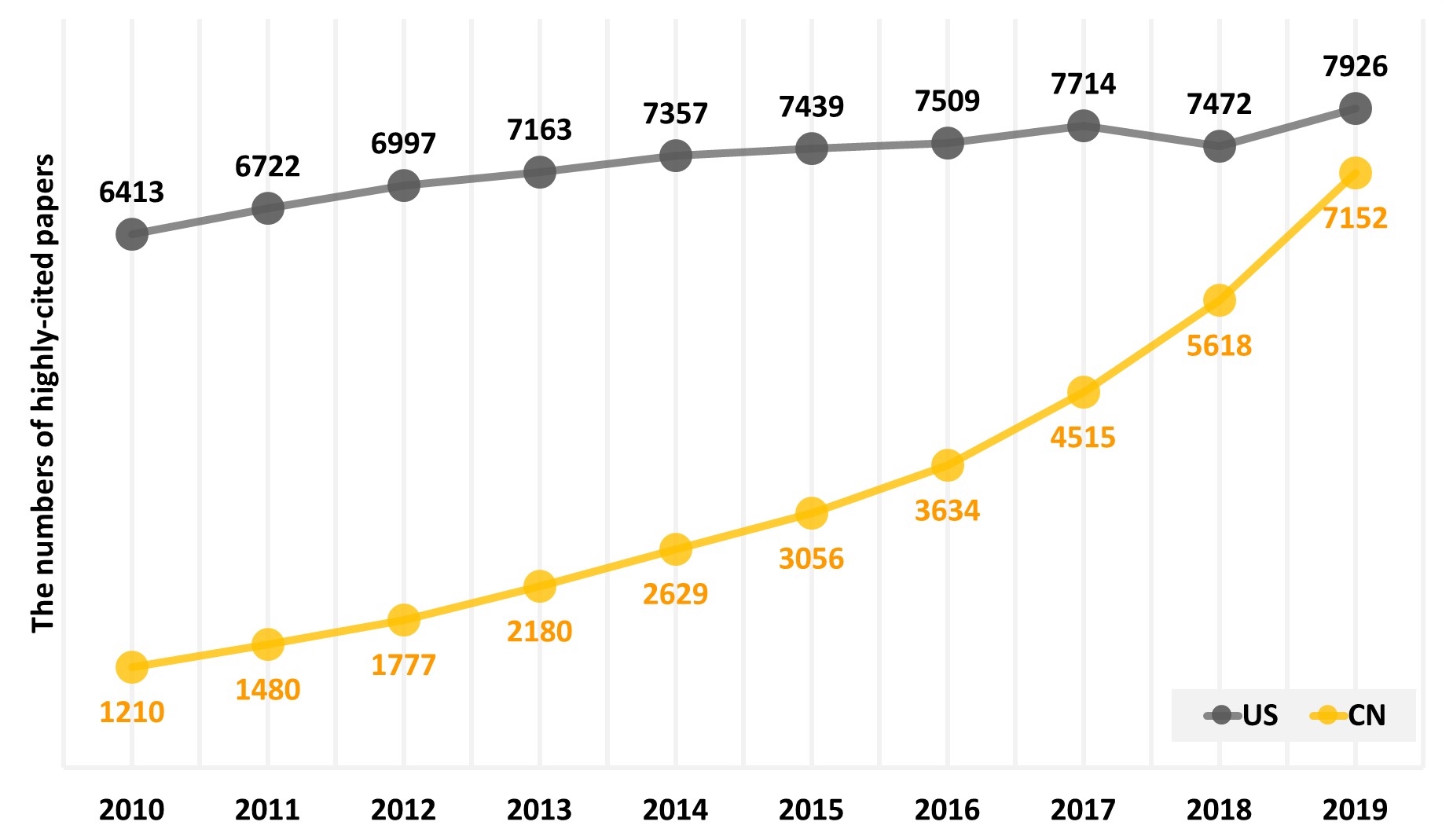 Fig. 3 The annual numbers of highly-cited papers from the US and China (Source: Clarivate Analytics)

The competition between the US and China of trade and technology poses many challenges to Taiwan, among which supply chain restructuring and S&T capacity development are arguably the most significant. Regarding the former, in order to lower the risks, governments will ask manufacturers of critical industries (e.g., pharmaceuticals, medical equipment or other strategic industries) to disperse their production to various regions. As for the latter, given the increasing importance of technology for the economy, society and national defense, the US and PRC have both decided, either by adopting a strategic plan (e.g., China’s 14th Five Year Plan), by issuing policy guidance (e.g., the Interim National Security Strategic Guidance issued by the White House), or by reviewing the situation (e.g., the White House’s Executive Order on American Supply Chains), to intensify the investment and protection of S&T and to assure the supply of critical goods such as semiconductors, electric-vehicle batteries, rare earth elements, and pharmaceuticals. It is highly likely the competition of S&T between the US and China will continue in the foreseeable future.

In order to overcome the challenges posed by the US-China tech war, we need to increase investment in S&T development and build/strengthen R&D partnership with the US, Japan and European countries. On the other hand, we need to review the rules and mechanism of sensitive technology protection. Hopefully more “technology shields” (like the “Silicon Shields”) can be built up to enhance competitiveness and to contribute to national security.