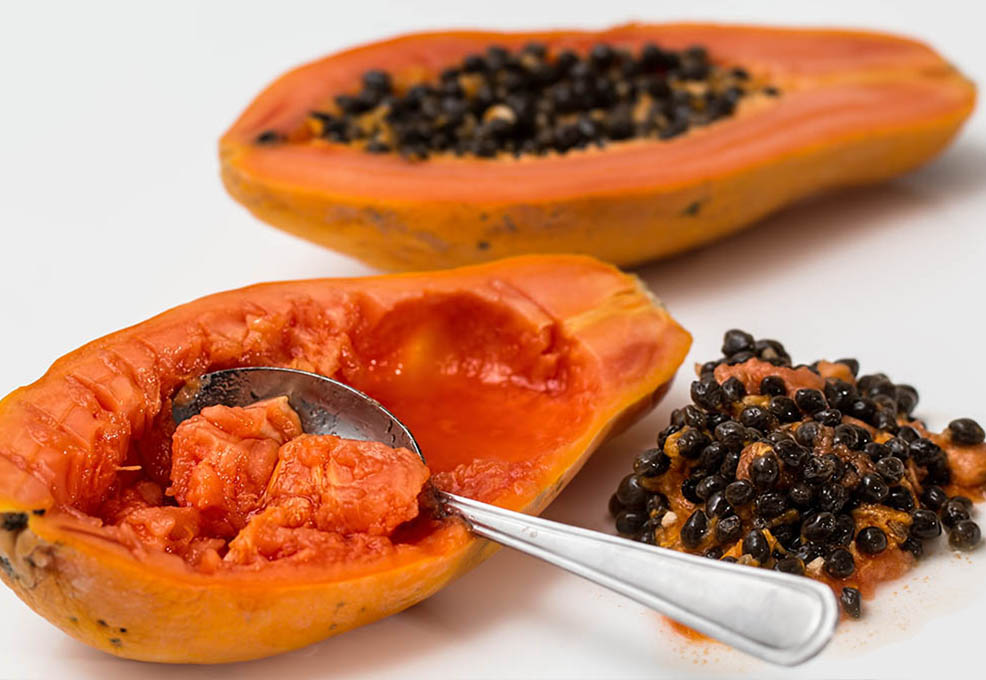 Papaya is one of the most nutritious fruits; however, papaya cultivation worldwide is seriously limited by Papaya ringspot virus (PRSV). Conventional measures of viral infection control have proved to be ineffective. However, transgenic resistance through plant genetic engineering brings new hope. In the 1990s, Prof. Yeh’s research team developed PRSV CP-transgenic papaya with broad-spectrum resistance to different geographic PRSV strains. During long-term field trials, unfortunately, another virus papaya leaf distortion mosaic virus (PLDMV) and super virulent strains of PRSV were found to be able to break down the CP-transgenic resistance. The team therefore further generated double resistance against PRSV and PLDMV by an untranslatable chimeric transgene containing both viral CP sequences. Moreover, to solve the problem of PRSV super virulent strains, untranslatable PRSV HC-Pro was used to disarm the function of viral suppression of super virulent strains. Currently, the single, double, and super resistances have been pyramided in a single papaya hybrid, which has great potential for global application.

Papaya is one of the most nutritious fruits; however, growing papaya in tropical and subtropical regions is seriously limited by Papaya ringspot virus (PRSV). The virus, transmitted by aphids in nature, can cause disaster of 100% infection in a very short time. Most traditional control measures against PRSV, involving pesticides against aphids, agricultural practices, resistance breeding, and cross protection by a mild strain have proved to be ineffective. However, transgenic resistance through plant genetic engineering brings new hope.

An appropriate segment (DNA or cDNA) of a virus genome can be constructed as a transgene and transferred into a plant host to trigger post-transcriptional gene silencing (PTGS) against the infection of the same virus. Since the transcript of a transgene is degraded and no proteins synthesized, the biosafety concerns are eased. Many farmers have adopted this strategy for controlling infecting viruses. In the late 1980s, Gonsalves’ team at Cornell University initiated programs of engineering the PRSV CP gene into papaya through particle bombardment to generate resistance to PRSV. The CP-transgenic cultivars of Rainbow and SunUp were deregulated in 1998, representing the first successful case of a transgenic fruit being commercialized in the world. After strict inspection, the transgenic papaya of Hawaii has been allowed to be marketed in Japan since 2012, representing the first GM fruit permitted for international trading. Unfortunately, however, these transgenic papaya cultivars do not provide resistance to PRSV strains outside Hawaii.

In the 1990s, Prof. Yeh and his coworkers at National Chung Hsing University generated PRSV YK CP-transgenic papaya by Agrobacterium-mediated transformation. Several transgenic lines showed complete resistance to the indigenous YK strain and other exotic strains from Hawaii, Thailand and Mexico. After a long process of ecology and biosafety assessments, YK CP 16-0-1 line has been formally approved for commercialization in Mainland China in Dec. 2018 and is soon expected to be approved by the Taiwan government in 2019.

Figure2. Greenhouse and field tests of YK CP-transgenic papaya with excellent resistance to PRSV
However, unexpected severe symptoms in YK CP-transgenic plants were noticed during the field trials. The causal agent was identified as the Papaya leaf-distortion mosaic virus (PLDMV), which becomes an emerging threat for the application of the PRSV CP-transgenic papaya. For generating transgenic resistance to both viruses, an untranslatable chimera construct comprised of untranslatable segments of PRSV YK CP and PLDMV CP coding sequences was designed and transferred into papaya to generate PTGS-based resistance. Three selected lines showed complete resistance not only to the transgene donors of PLDMV and PRSV, but also to other heterologous PRSV strains from Mexico, Thailand and Hawaii. They have a great potential for the control of PRSV and PLDMV in Taiwan and other countries.
Extremely virulent PRSV strains infecting YK CP lines in field trials were also found. The isolated strain 5-19 can infect PRSV YK CP- transgenic lines and PRSV/PLDMV double resistance lines. The recombination of 5-19 and YK revealed that 5-19 possesses a stronger gene silencing suppressor HC-Pro, which can suppress PTGS breaking down the CP-transgenic resistance. This indicated that the selection and emergence of the super virulent strains is a potential problem for the application of CP-transgenic crops for virus control. In order to disarm the silencing suppression ability of PRSV super virulent strains, new transgenic lines of the papaya carrying the untranslatable HC-Pro sequence were generated. Several HC-Pro transgenic lines confer high levels of resistance to the super virulent strain PRSV 5-19 and to other severe strains from Taiwan, Hawaii, Thailand and Mexico. This approach can avoid the emergence of super virulent strains selected by CP-transgenic lines.
The molecular markers derived from the flanking sequences of the transgene integration significantly speed up the breeding process for pyramiding of single, double and super transgenic resistance into a hybrid variety. This super papaya cultivar confers more wide-spectrum resistance to different geographic strains of PRSV and PLDMV, and can avoid the emergence of super virulent PRSV strains.
RELATED