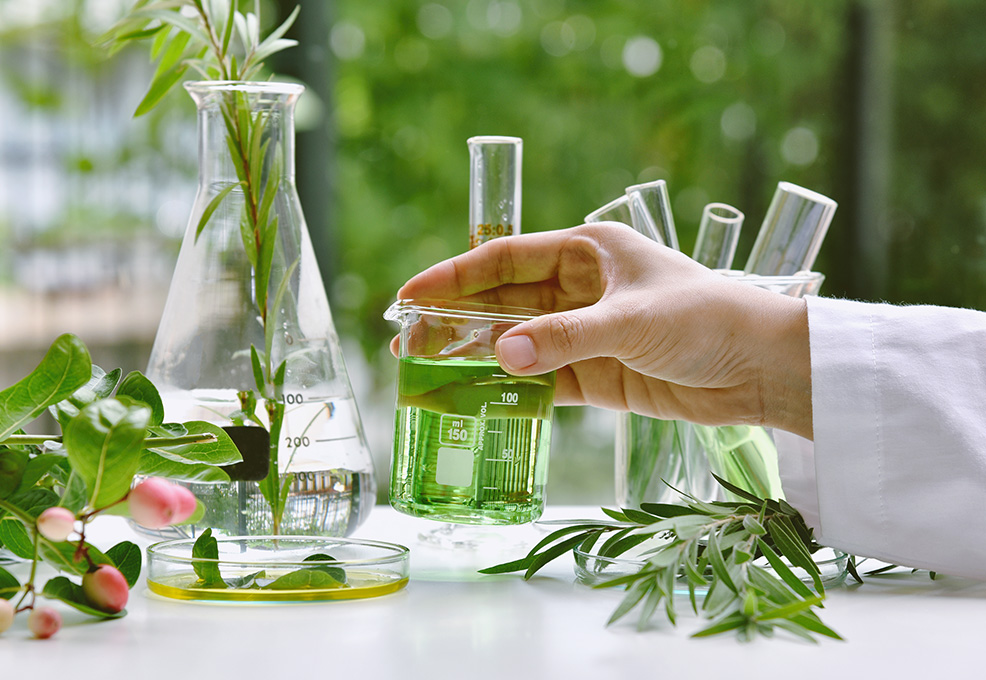 Dr. Lie-Fen Shyur, a Distinguished Research Fellow at the Agricultural Biotechnology Research Center, Academia Sinica has conducted systematic research to identify novel mechanism-based botanical extracts and derived agents that fight inflammatory disorders. Shyur laboratory discovered a botanical extract derived from the edible medicinal plant Crassocephalum rabens (or C. crepidioides named “Zhaohe Cao” in Mandarin), which has received approval from the US Food and Drug Administration (FDA) for Investigational New Drug (IND) in humans for cancer therapy. This Zhaohe Cao-derived botanical drug with defined chemical fingerprints has novel efficacy as an anti-inflammatory agent, inhibiting lung and/or brain metastases of tumors, reprogramming tumor microenvironments, prolonging life, and reducing side effects caused by cancer chemotherapeutic drugs in animals, as demonstrated using the state-of-the-art systems biology-based omics approach. Part of the research results have been published in Cancer Research, International Journal of Cancer, Molecular Medicine, Cancers, and have received several US and ROC patents, and won the 2013 National Innovation Award, the 2014 National Invention and Creation Award, the 2018 Tien-Der Lee Outstanding Biomedical Award, and the 2019&2020 National Innovation Advancement Awards. This Zhaohe Cao-based botanical drug discovered and developed by Dr. Shyur’s laboratory is an important breakthrough and milestone in Academia Sinica that can serve as a role model for translational herbal medicine research in Taiwan. The Research & Development of Zhaohe Cao-based botanical drug is anticipated to help and promote the economy, profit the agriculture of Formosan medicinal plants, and strengthen the competiveness of the Taiwanese pharmaceutical industry for botanical drug development.

The incidence of cancer diseases is climbing every year throughout the world, especially among young adults. Cancers have been the top life-threatening diseases in Taiwan in the past decades, and every 4 min 42 sec one new cancer case is diagnosed in Taiwan (statistical data from the Health Promotion Administration, Ministry of Health and Welfare, Taiwan, 2017). Despite recent advances, the outcomes of chemotherapy or targeted therapy for patients with metastatic tumors remain unsatisfactory because of the relative drug resistance of metastatic cells, the high recurrence rate, and severe side effects in cancer patients. The pressing need for development of new or complementary therapeutic or preventive agents for cancers has spurred the R&D of phytomedicines or botanical drugs with novel modes of action. As the global botanical drug market size is expected to gain market growth with a CAGR of 3.8% in the forecast period of 2020 to 2025, and will be expected to reach USD 39.160 billion by 2025 (GLBAL INFO RESEARCH https://www.openpr.com/news/ 2210038/global-botanical-drug-market-analysis-2020-2025), the development of botanical drugs for cancer therapy has great market needs and value. Plant-based medicines are also considered as the future for cancer treatment.

Taiwan is home to a wide range of flora and fauna that belong to three major climatic zones. Asteraceae (or Compositae 菊科) plants, for instance, make up the third largest category of flowering plants in Taiwan, and approximately one third of them have been anecdotally claimed to have diverse pharmacological effects; however, only a small portion have been scientifically validated for their bioactive chemical composition and pharmacological efficacy. Dr. Lie-Fen Shyur, a Distinguished Research Fellow at the Agricultural Biotechnology Research Center, Academia Sinica, has conducted systematic research over the past two decades to explore and develop novel phytoagents from Formosan medicinal plants with solid evidence- and mechanism-based pharmacological activities that fight inflammatory and cancer diseases.

Through technology transfer and collaboration with a research team at the Development Center for Biotechnology (DCB) to scale-up the production of the bioactive Zhaohe Cao extract, establish the Chemical Manufacturing Control (CMC) protocol, and complete toxicology, in March 2017, the Zhaohe Cao-based anti-cancer extract received US Food and Drug Administration (US FDA) approval as a botanical Investigational New Drug (IND) for cancer therapy. Later, the Zhaohe Cao-based botanical drug technology was licensed to a Taiwanese pharmaceutical company for a phase Ib/IIa clinical trial in cancer patients in Taiwan hospitals. The Good Agricultural and Collection Practices (GACP) for production of high quality Zhaohe Cao materials for producing botanical drugs according to World Health Organization guidelines is in collaboration with the Taichung District Agricultural Research and Extension Station, Council of Agriculture.

Some of the research results of Zhaohe Cao have been published in Cancer Research, International Journal of Cancer, Molecular Medicine, Cancers, etc., and have also received several US and ROC patents. Several national awards have been received for the achievements of the Zhaohe Cao research, including the 2013 National Innovation Award, the 2014 National Invention and Creation Award, the 2018 Tien-Der Lee Outstanding Biomedical Award, and the 2019&2020 National Innovation Advancement Awards. The R&D of the Zhaohe Cao-based anti-cancer botanical drug is anticipated to promote the economy and profit of Taiwan’s medicinal plants agriculture, and to strengthen the competiveness of the Taiwanese pharmaceutical industry for botanical drug development.