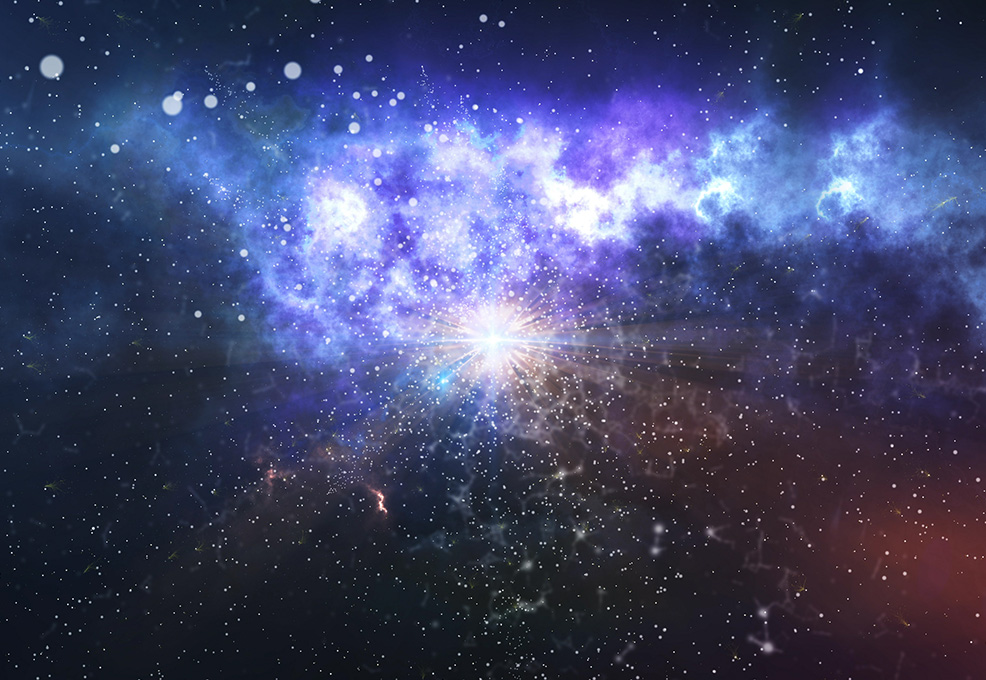 Dark matter accounts for the majority of the mass of the Universe. However, the nature of dark matter remains obscure, and thus astrophysicists have been investigating halo substructures to try to distinguish different dark matter models. Prof. Hsi-Yu Schive and Prof. Tzihong Chiueh of National Taiwan University (NTU) conducted unprecedentedly high-resolution simulations to study the detailed structure of wave dark matter halo and revealed, for the first time, that its central soliton core undergoes a confined Brownian motion. This soliton random walk can lead to efficient tidal disruption of the ancient central star cluster in dwarf galaxies, which provides a unique probe for the wave dark matter model.

Dark matter comprises approximately 27% of the energy of the Universe and plays an indispensable role in galaxy formation and evolution. However, the nature of dark matter remains obscure; for example, what is its composition, particle mass, and temperature? Wave dark matter is an emerging dark matter candidate composed of ultralight, ∼10-22 eV, bosons in the Bose-Einstein condensation state. It exhibits a rich wavelike structure, including a soliton core within a surrounding halo that continuously self-interferes on the de Broglie scale (see the figure above). These solitons are as massive as typical supermassive black holes in the galactic centers and thus can have a great impact on the motion of the surrounding stars.

In a paper published in Physical Review Letters [1], Prof. Hsi-Yu Schive and Prof. Tzihong Chiueh of National Taiwan University (NTU), in collaboration with Tom Broadhurst, an Ikerbasque researcher in Bilbao, Spain, conducted unprecedentedly high-resolution simulations to study the detailed structure of wave dark matter. Using GAMER [2], a state-of-the-art multi-GPU accelerated code developed from scratch by the NTU team, their simulations achieved a resolution of 10-5 of the halo radius and revealed, for the first time, that the soliton undergoes a confined random walk at the base of the halo potential. “It is similar to the Brownian motion of a massive particle randomly colliding with a large set of smaller particles,” said Prof. Schive.

This soliton random motion is significant for the fate of the ancient central star cluster observed in the ultrafaint dwarf galaxy Eridanus II, as the agitated soliton gravitationally shakes the star cluster in and out of the soliton, leading to complete tidal disruption of the star cluster. The disruption timescale is found to be much shorter than the estimated age of the star cluster, which can potentially present a serious challenge for the wave dark matter model.

As a possible solution, the researchers also showed that this destructive effect can be mitigated if the halo of Eridanus II has been stripped away by the tidal field of the Milky Way, thereby reducing the agitation. Without the interplay between halo and soliton, the amplitude of soliton random motion would decline significantly, and so the star cluster and soliton could coexist.

According to Prof. Schive, “These exciting findings will allow scientists to explore the nature of dark matter in brand-new ways; for example, the soliton random motion may have a profound impact on the supermassive black hole at the galactic center.“ Prof. Chiueh said, “Wave dark matter is a promising dark matter candidate that can originate from non-QCD axions and can be one of the low-energy manifestations of string theory.”