The other chapter in Space Science: Is our world a hologram?

:::HOME / NATURAL SCIENCES / The other chapter in Space Science: Is our world a hologram? 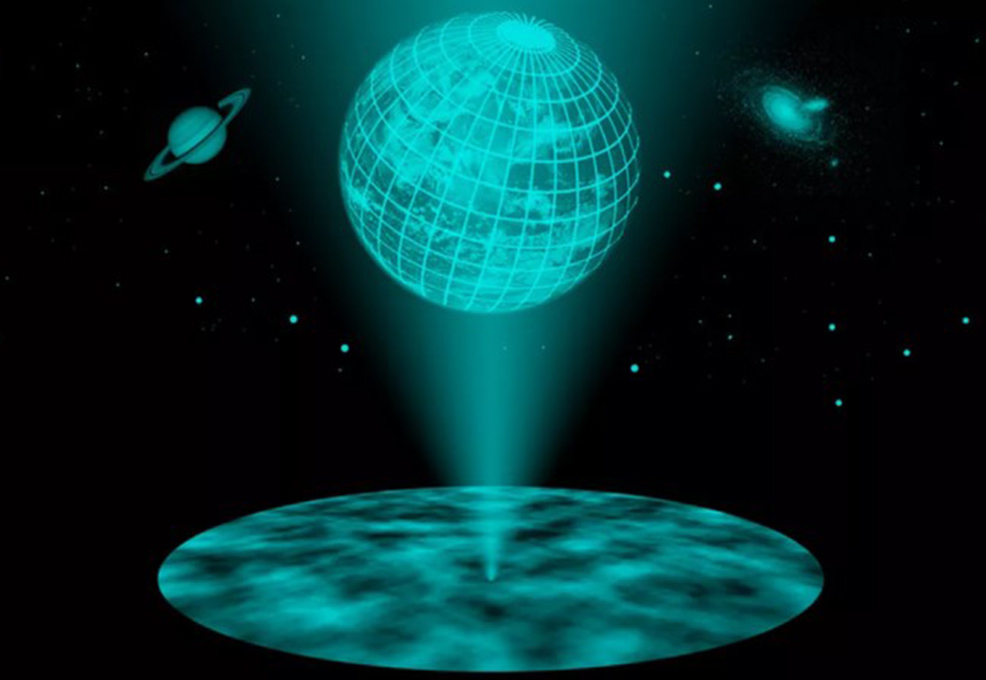 The study of black hole physics shows that the maximum amount of information contained in a space region is proportional to the region’s boundary surface area. This observation indicates that the true fundamental degrees of freedom (building blocks) of our world are encoded in the boundary surface of our universe, which is just like a hologram. People can realize the hologram in a string model, which is among the very few possible consistent models for the elementary building blocks of our nature, called AdS/CFT. Using the dictionary in AdS/CFT and the tools of non-equilibrium quantum physics, professor Yeh and his colleague have provided a novel way to study the time evolution of entanglement entropy, which is as mysterious as black holes, in quantum field theory. They hope their study of entanglement entropy on the hologram may shed some light on the quest for the final building blocks and reality of our world.

The world appears to us as a three-dimensional (3D) space. It may be crazy to say that we are actually living on a two-dimensional (2D) surface, like a hologram. In the 3D world, human beings, the Earth, and even the whole universe and the objects governed by physics laws are merely an illusion that is generated from this 2D reality. As crazy as it may seem, there is evidence in the study of gravity physics that as we explore the smaller and smaller structures of spacetime, the fundamental laws of physics seem increasingly appropriate in the space with less dimension. The story started when a German physicist, Karl Schwarzschild, found his famous solutions to Einstein’s equations of general relativity in 1915 at the Russian front in World War I. The solutions showed that if we cram a chunk of matter into a region smaller than its Schwarzschild radius, the spacetime would be so highly curved that nothing can go out of this radius. Later these solutions were called black holes, and the points of no return from the surface were called the event horizon. For example, if you try to cram the earth into your pocket, a black hole may form. Once the black hole is formed, it seems all information about the earth will be lost, since nothing can escape the event horizon. This evidently violates the second law of thermodynamics which indicates that entropy, measuring the disorder of physical systems, can never decrease. It is fortunate that later Stephen Hawking, in his 1974 study of black hole’s quantum effects, showed that black holes are not totally black. They do have entropy proportional to the area of the event horizon, even though we do not really know what the fundamental degrees of freedom are that carry this entropy. The holographic principle, which was proposed by Gerald ‘t Hooft and Leonard Susskind in 1994, generalized this idea and demonstrated that the amount of information (entropy) contained in a region of space is bounded by the area of that region’s boundary surface, with the entropy equal to that of the black hole in the same area. In other words, at the fundamental level of our nature, all information about our 3D world can be written on a 2D hologram.

There is a fundamental theory of physics that can realize the holographic principle. It is a string theory called AdS/CFT which was constructed by Juan Maldacena in 1996. In this model, 3D quantum gravity theory is equivalent to 2D quantum field theory. However, when a black hole is formed in the 3D gravity theory, the 2D quantum field theory is more suitable for describing the dynamics. The extra dimension in the gravity theory is secretly encoded in the energy scale of the quantum field theory. Thus the language of gravity can be translated into the language of quantum fields. Moreover, it was proposed by Shinsei Ryu and Tadashi Takayanagi in 2006 that in AdS/CFT, entanglement entropy in the quantum field theory, which is another mysterious property of quantum physics, is equal to the area of some minimal surface in the gravity theory (Ryu-Takayanagi formula). In recent years, Professor Yeh and Professor Da-Shin Lee from NDHU, who is an expert in quantum non-equilibrium physics, have been trying to use the tools of non-equilibrium dynamics to study the motion of strings and branes in the gravity theory, and by the dictionary of AdS/CFT were able to obtain interesting time evolution of the entanglement entropy which is complementary to the Ryu-Takayanagi formula. This is quite a novel way of looking at AdS/CFT. One of their works was published in the Journal of High Energy Physics and was included in the Editor’s Recommendation.

The fundamental building blocks of our nature are still unknown. We only know that they should incorporate quantum and gravity (general relativity) effects. According to the content above, they should exist on the boundary surface, and the world would be a hologram. The authors hope that the study of holographic entanglement entropy may shed some light on the quest of the final building blocks and reality.