Sleep Neuroimaging: Toward Alterations of Perceptions and Consciousness in Human Sleep 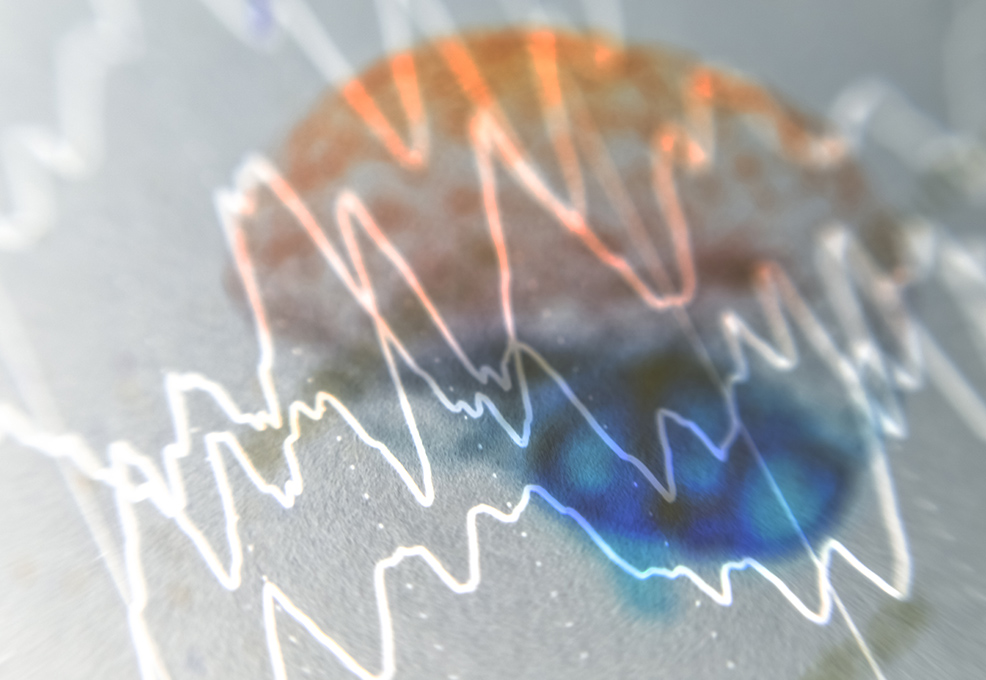 Sleep neurophysiology is utterly fascinating due to the inevitable alterations between conscious wakefulness and unconscious sleep. Although sleep medicine has a seventy-year history, there are still puzzles to be solved. Why are some people unable to fall asleep? Why do we feel dizzy as soon as we wake up in the morning and then gradually become rejuvenated after ten minutes? The current sleep neuroimaging technique may provide answers to the subjective perceptions of human sleep. Based on the latest understanding of brain functionality, we found that the human brain does not “shut off” and “turn on” as a whole as we expected, which provides plausible answers to the subjective-objective mismatches. Leveraging the sleep neuroimaging technique, young researchers are encouraged to have a glimpse of the sophisticated neuroscience stories of the mysterious consciousness alterations in the sleep-wake transitions. 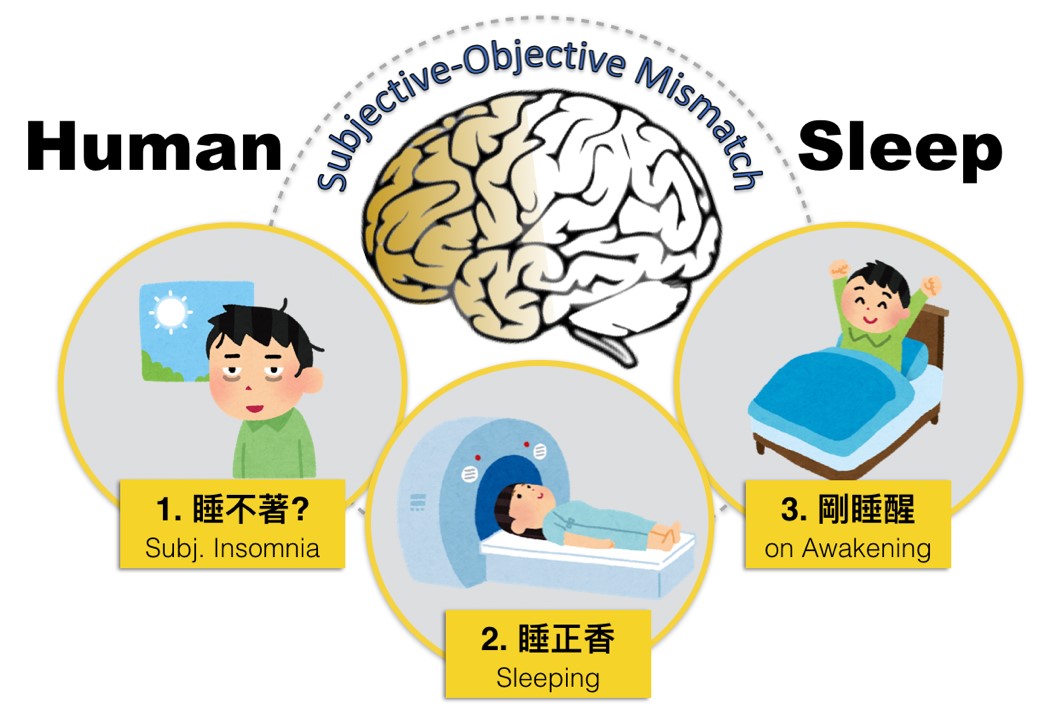 “Sleep is a temporary death, death is a permanent sleep; every day is your birthday, because you are reborn.” This ancient Islamic proverb delineates the mysterious facet of human sleep: every person inevitably falls into the unconscious realm with tiredness every night and comes back to reality with a rejuvenated mind every morning. Why do we have to enter sleep with mysterious dreams each night? Over the past 70 years, neuroscientists have devoted themselves to studying sleep using state-of-the-art technologies such as gene expression, electrophysiology, polysomnography (PSG), and neuroimaging. Through a series of animal and human sleep investigations, we comprehend that the function of sleep is to restore the required molecular biology and to reserve cognitive capacity, constructing the field of sleep medicine.

Nevertheless, the curiosity about human sleep is still beyond full comprehension, with unanswered issues remaining such as the content of dreams, the origin of sleepwalking and the necessity of unconsciousness in sleep. We speculate that these difficult queries are related to subjective perceptions of that sleeping person, which are hard to reflect with objective measures. Fortunately, we found a way to leverage the novel technique of functional Magnetic Resonance Imaging (fMRI), which has the potential to map multiple brain networks with specific cognitive functions for humans. Since 2008, the fMRI technique disclosed that human brain networks stop communication in deep sleep, which partly explains the subjective perceptions in sleep. For example, the connectivity of the default-mode network (DMN) is diminished in deep sleep, which is associated with unconsciousness during sleep (the same phenomenon is observed in anesthesia, coma and vegetative states). Therefore, we conjecture that mapping the sleeping human brain will enable us to answer the mysterious questions about human sleep. 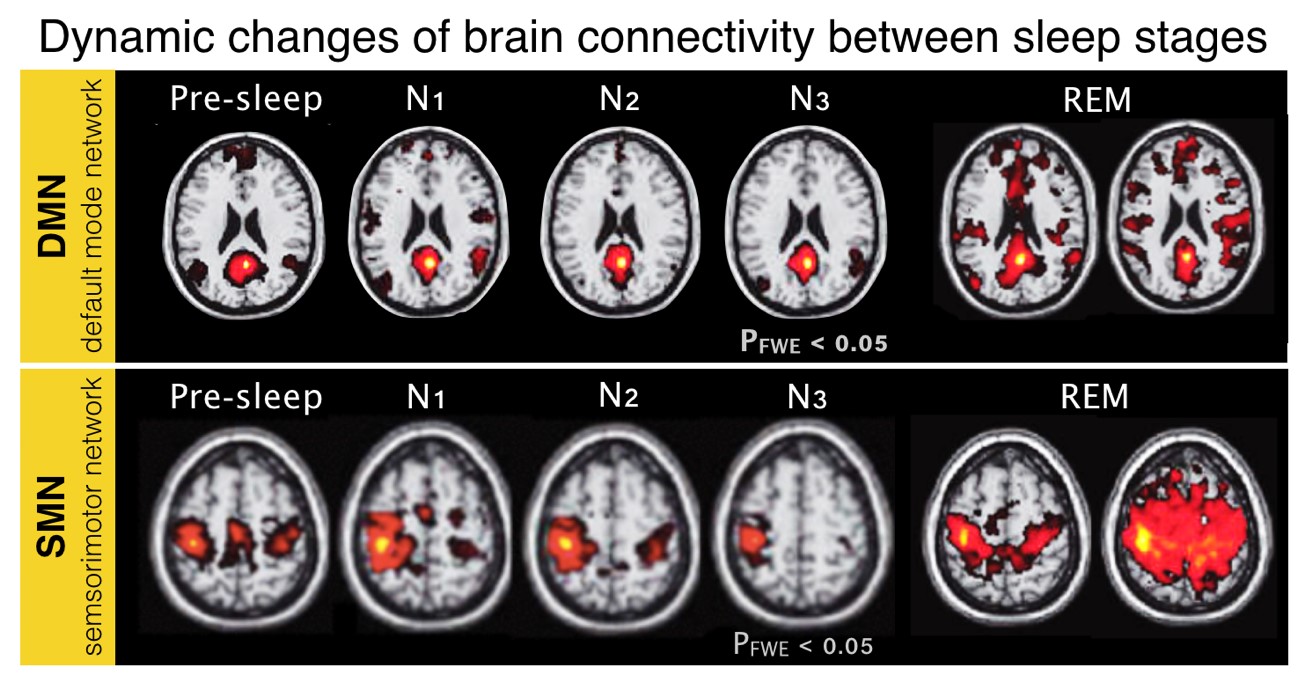 Adopting sleep neuroimaging of the human brain, we conducted a series of midnight experiments using simultaneous recordings of EEG and fMRI, where we used EEG for standard sleep scoring and fMRI for human brain mapping. Our research findings provided answers to some of the sleep mysteries by linking the subjective perceptions and the objective brain functions during sleep. For example, “subjective insomnia” is one clinical issue whereby patients report the failure to fall asleep; however, they exhibit normal sleep architecture according to their whole-night PSG records in the sleep center. Could this issue originate from brain malfunctions? As all brain networks become inactive during the sleep of a normal person, we found that the sleep-state misperception was the result of the “unrested frontal cortex” during sleep. Specifically, the posterior brain becomes inactive as expected, whereas the frontal cortex remains as active as in the waking condition, which could be the rationale for some patients with subjective insomnia. Actually, it is quite common that our multiple brain networks do not act together in the sleep-wake transitions, especially when we wake from sleep every morning. Do you feel refreshed with full control of your body when you open your eyes each morning? The normal experience right after awakening includes dizziness, disorientation and impaired motor function, lasting for 30 minutes on average, and named as “sleep inertia.” Our research findings disclosed that the connectivity of the consciousness-related network, DMN, was fully recovered during sleep inertia as compared with its waking condition; however, the connectivity of the sensorimotor network, controlling our body sensations and movements, remained largely unconnected on awakening, implying that brain networks do not recover at the same speed in sleep inertia. Collectively, sleep neuroimaging can link up the subjective perceptions and objective brain measures to answer the unsolved sleep mysteries in the human brain.

The aforementioned two examples illustrate the potential of sleep neuroimaging for interpreting the originality of sleep disorders in the cognitive domain, such as sleep walking, narcolepsy and chronic sleep deprivation. For example, if different brain networks function asynchronously, we may predict that sleepwalking will happen when the sensorimotor network is turned on but without the DMN connections in sleep (the opposite scenario of sleep inertia). Furthermore, using the same technique, a recent study from Boston University displayed that the EEG slow wave (SW) drives the cerebrospinal fluid (CSF) oscillation in deep sleep to remove the metabolic waste. This new finding provides a new biological reason for “why we sleep,” and sheds light for further simultaneous EEG-fMRI studies on the sleeping functions of the aging population and neurological/psychiatric patients.
In summary, sleep neuroimaging is a rising nova in sleep medicine, and is especially crucial for the aging process, clinical comorbid pathology and explorations of consciousness. In the near future, it will be seen that simultaneous EEG-fMRI recordings will be implemented to improve human sleep quality incorporated with neurofeedback settings. Neuroscientists are attempting to decode dream content from human visual networks in REM sleep. Leveraging the sleep neuroimaging technique, young researchers are encouraged to discover the origin of subjective-objective mismatches, to unearth the brain mechanisms of consciousness alterations, and, most importantly, to dream big for the thriving sleep neuroscience.
RELATED