:::HOME / LIFE SCIENCES / Development of an Anti-EpCAM Antibody for the Treatment of Colorectal Cancer 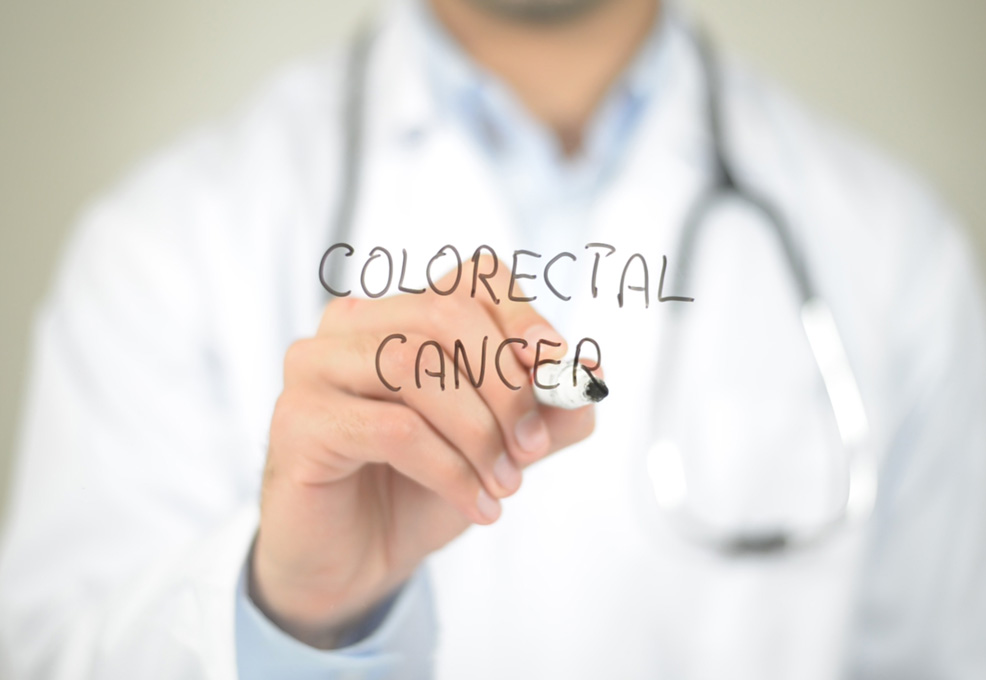 The epithelial cell adhesion molecule (EpCAM) is highly expressed in advanced epithelial cancers and tumor-initiating cells, but its role in cancer progression and its value as a therapeutic target have yet to be elucidated. We found that the extracellular domain of EpCAM (EpEX) acts through its EGF-like domain I to bind EGFR, activating downstream ERK1/2 and AKT signaling. We generated an anti-EpCAM neutralizing antibody, EpAb2-6. We found that EpAb2-6 treatment could attenuate ADAM17 and γ-secretase activity, EpCAM-downstream gene expression, and tumor colony and sphere formation. EpAb2-6 also decreased AKT and FOXO3a phosphorylation, leading to FOXO3a nuclear translocation and apoptosis. Epitope mapping by phage display revealed that EpAb2-6 binds to positions Y95 and D96 of the EGF-II/TY domain of EpCAM. To enhance the potential for this antibody to be used clinically, we successfully engineered EpAb2-6 to a human format (antibody humanization; hEpAb2-6). Finally, we showed that treatment with EpAb2-6 produced an antitumor effect and markedly extended the survival time in both mouse metastasis and orthotopic models of human colorectal cancer. To the best of our knowledge, hEpAb2-6 is the first humanized anti-EpCAM antibody to directly trigger apoptosis in cancer cells through a p53-dependent or -independent pathway. Thus, our findings provide potent fundamental knowledge to advance the development of antibody-based therapeutics against colorectal cancer and antibody-based theranostics. 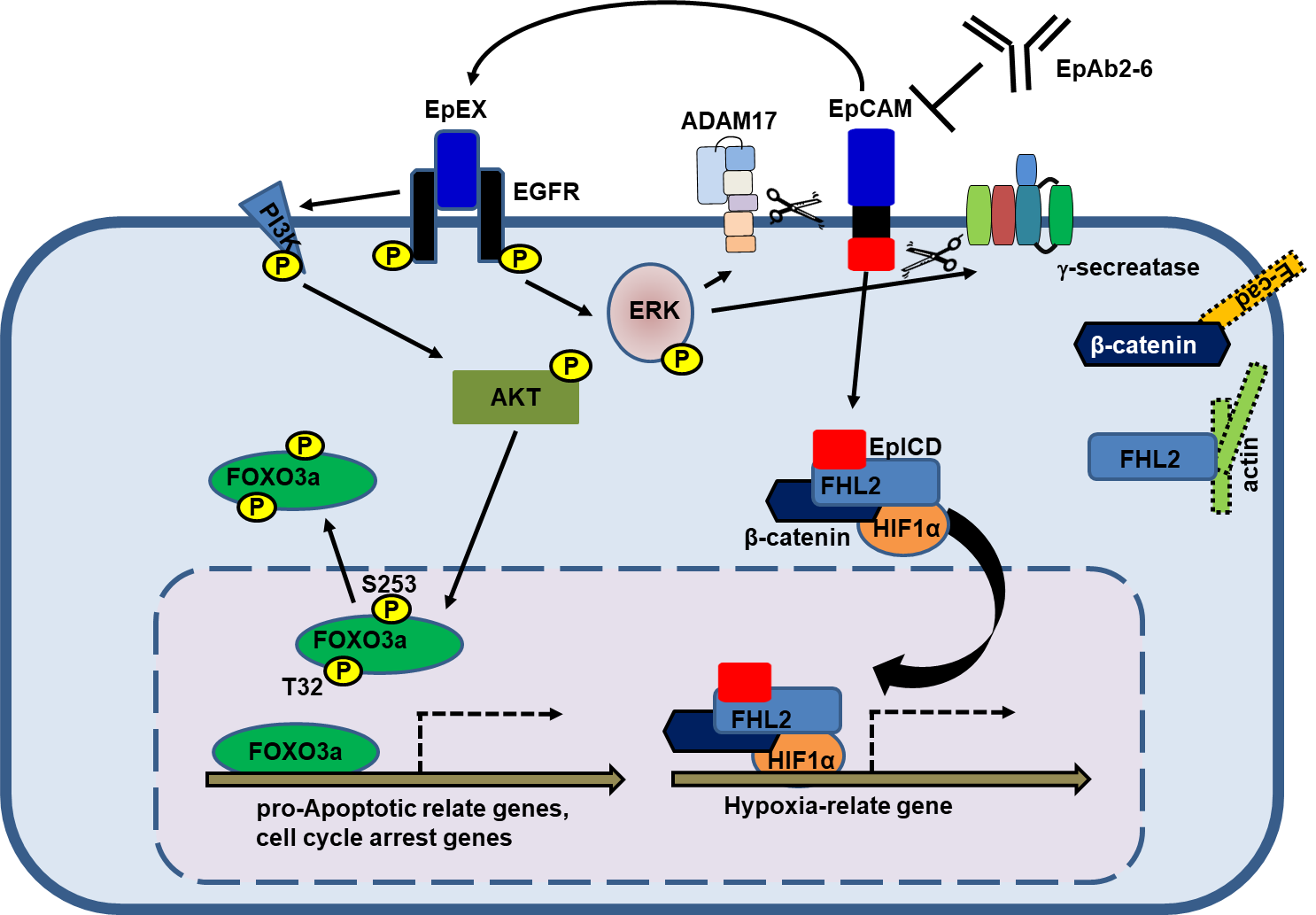 EpCAM is highly expressed in CSCs and tumor-initiating cells (TICs). We showed that EpCAM and reprogramming factors (c-Myc, Oct4, Nanog, and Sox2) were concomitantly elevated in TICs, which were shown to have superior self-renewal, invasiveness and tumor-initiating abilities. Our results showed that EpCAM induced the expression of reprogramming factors and epithelial-mesenchymal transition (EMT) genes, thereby promoting tumor initiation, self-renewal and invasiveness. In addition, the intracellular domain of EpCAM (EpICD) bound to and activated the promoters of the reprogramming factors. The release of the extracellular domain of EpCAM (EpEX) triggered activation of EpICD and regulated the expression of the reprogramming factors. We found that EpEX binds and activates EGFR downstream ERK1/2 signaling, thereby inducing the regulated intramembrane proteolysis (RIP) of EpCAM and the shedding of EpICD. Analysis of colorectal cancer tissues showed that nuclear EpICD was highly correlated with metastasis and poor prognosis. We discovered that the expression of nuclear EpICD in metastasized carcinomas was significantly higher than that in non-metastasized tumors. Next, the negative correlation between nuclear EpICD protein levels and overall survival was examined. Patients with tumors showing high nuclear EpICD expression had a significantly lower overall survival rate than patients with low nuclear EpICD expression tumors (Fig. 1). These findings suggest that EpCAM plays an important role in regulating the cancer-initiating ability of TICs. On the other hand, the expression of EpICD enhances nuclear translocation of β-catenin and transcriptional activity of HIF1α. This discovery is expected to be applicable in the development of new strategies for cancer therapy. Hence, we hypothesize that the addition of anti-EpEX antibodies may enhance the therapeutic efficacy of anti-EGFR antibodies. 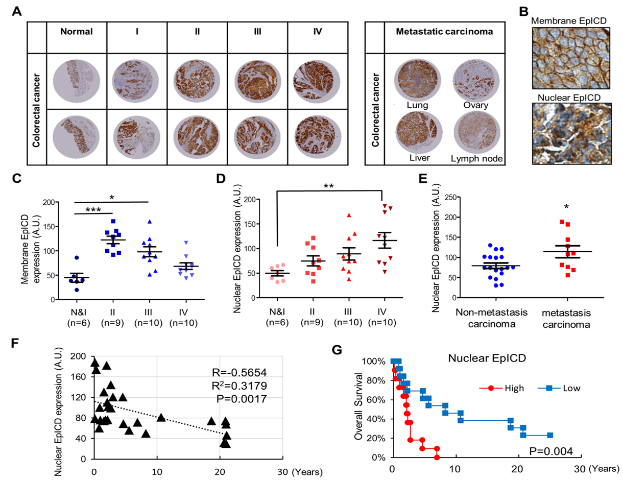 Therapeutic antibodies targeting EpCAM or the inhibition of EpICD translocation hold great potential as novel therapeutic strategies for the treatment of colorectal cancer. In order to develop a cancer diagnostic reagent and potential therapeutic antibody, we generated many monoclonal antibodies against EpCAM that specifically bind to cancer cells but not to normal cells. One of these anti-EpCAM mAbs, EpAb2-6, was found to directly kill cancer cells by inducing apoptosis in vitro. EpAb2-6 treatment inhibited tumor growth and prolonged the overall survival of both a pancreatic cancer metastatic mouse model and mice with human colon carcinoma xenografts (Fig. 2). EpAb2-6 also increased the therapeutic efficacy of irinotecan, fluorouracil, and leucovorin (IFL) therapy in a colon cancer animal model and gemcitabine therapy in a pancreatic cancer animal model. We further found that EpAb2-6 inhibits the production of EpICD, thereby decreasing β-catenin translocation into the nucleus while activating the expression of p53 and p21. To enhance the potential for this antibody to be used clinically, we successfully engineered EpAb2-6 to a human format (antibody humanization; hEpAb2-6). 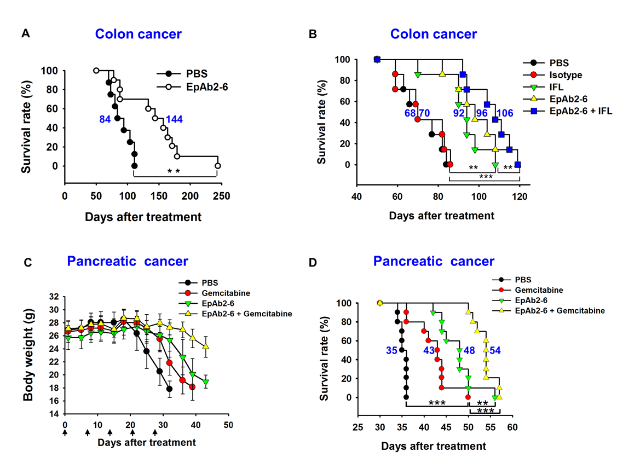 To identify the binding motif of the EpAb2-6 antibody, we performed the phage display technique and revealed that the phage-displayed LYD motif corresponds to amino acid residues at positions 94-96 of EpCAM. Epitope mapping experiments revealed that EpAb2-6 binds to positions Y95 and D96 of the EGF-II/TY domain of EpCAM (Fig. 3). To the best of our knowledge, hEpAb2-6 is the first anti-EpCAM antibody to directly trigger apoptosis in cancer cells, rather than acting through immune system-dependent cytotoxic pathways. Recently, we have found that the anti-EpCAM neutralizing antibody, hEpAb2-6, induces apoptosis of colon cancer cells through AKT/FOXO3a cascade, inhibits the nuclear translocation of EpICD and β-catenin, and prolongs survival in both metastatic and orthotopic mouse models of colorectal cancer. 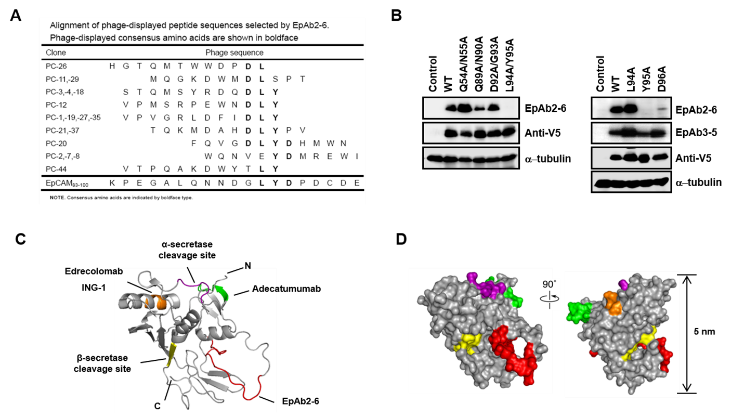 Detection of circulating tumor cells (CTCs) from peripheral blood is a primary strategy used in methods for early cancer detection. The major global pharmaceutical companies, such as Novartis and Roche, and the world's leading medical equipment company, Siemens, have recently invested extensive resources in CTC detection. CTCs can provide clinically significant information for the diagnosis, prognosis and treatment of cancers. We have also generated a monoclonal antibody against EpCAM, EpAb3-5, which has high affinity (Kd < 4.66 × 10-13 M). We demonstrated that the binding of this antibody is superior to that of the anti-EpCAM antibodies that are currently on the market. We further used EpAb3-5-conjugated magnetic beads to perform CTC capture experiments of whole blood from cancer patients (Fig. 4), while conducting parallel testing with commercially available CTC detection systems. We observed that EpAb3-5-conjugated magnetic beads capture a significantly higher number of CTCs compared with these commercially available CTC detection systems. It is worth noting that the inventor of the CellSearch CTC detector reported that EpAb3-5 outperformed all other tested EpCAM antibodies in the capture of CTCs (Andree KC et al., 2016). Collectively, our results demonstrated that EpAb3-5 possesses high specificity and affinity and can therefore be used to establish high-performance platforms to more accurately and effectively capture CTCs. Collectively, our results indicate that novel EpCAM mAbs can potentially be useful for cancer-targeted therapy, diagnosis and molecular imaging. 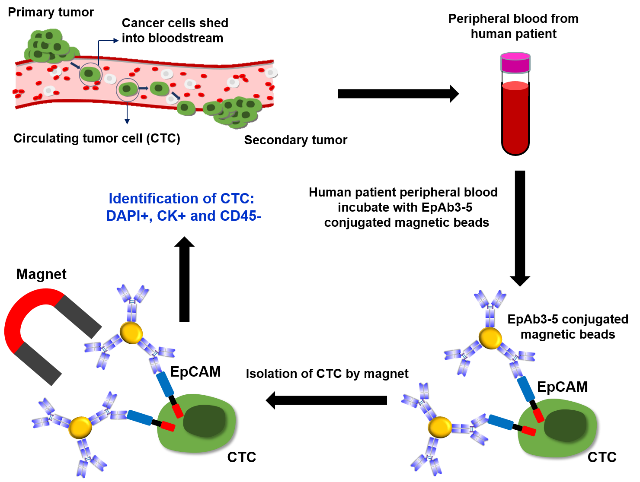