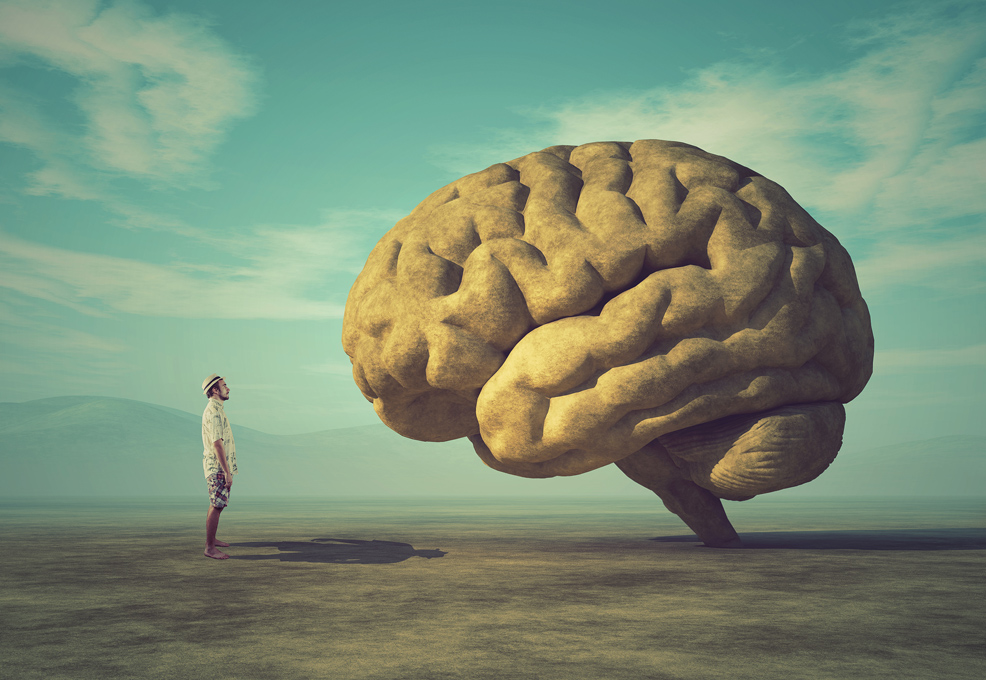 Optimal brains make optimal decisions. With aging, human ability to make decisions changes. Such age-related change in decision processing reflects changes in neural computations in the brain. Research in our lab focuses on evaluating how age-related changes in brain neural network operations influence young and older decision behaviors. Our findings suggest that age alters the brain regional contributions towards a decision behavior that may be indicative of normative vs. clinical aging. Better understanding of the specific information processes represented by such age-related brain differences might help future detection and intervention strategies in addressing cognitive aging issues associated with world population aging.

Despite the global aging human population and growing complexity of socio-economic environmental interactions, very little is known about age-related effects on cognitive brain processing, in particular the processing of value-based decisions. The importance of such understanding is clear given the implications of the costs of making sub-optimal decisions such as in mental or health care and finances, at the personal, social, and societal levels. My laboratory adopts the notion that an optimally functioning brain makes optimal decisions with respect to its environment. By extension, sub-optimal decisions reflect altered functioning in neural networks in the brain. Thus, with respect to age-related effects, a key aim is first to characterize the networks in the brain that young and older adults use to process value-based decisions, and how this relates to the sorts of decisions that they make. Overall, my laboratory focuses on how neural networks, such as the human brain, instantiate value-based decision-processing, how this reflects normative or pathological information processing, and how this might be modulated.

The base theory motivating our research on decision processing in neural networks, and factors modulating it, frames the brain essentially as a predictive coding machine1. In this view, the brain processes incoming sensory information, stores that information, and subsequently predictively uses it to decide which actions would lead to desired outcomes when negotiating the environment. Thus, our behavioral decisions reflect hypotheses of the value of the behavior computed by neural networks in the brain. For instance, deciding whether or not to spend resources to purchase an item involves evaluating available information about the item value to arrive at a hypothesized outcome associated with a selected behavioral action. Accurate processing of the value of items or stimuli in the brain is then critical for appropriate action selection. However, human behaviors often reflect subjective biases that deviate from decisions based on objective
value2. One important influence appears to be the age of the decision-maker, suggesting that the older brain processes value quite differently from the younger brain.

To investigate this, my lab implemented a novel Lottery Choice Task developed for a functional magnetic resonance imaging (fMRI) experiment to probe how normal young (aged around 20 yrs) and older (aged around 65 yrs) adult neural processes decide between stimuli that predict different expected values3. Participants are presented with stakes that vary in probability to win (or simultaneously lose) different magnitudes of points. They then decide whether to accept or decline the given stakes, after which feedback is given. Importantly, stakes are independent of each other so that decisions should be made solely based on the information provided for each stake. We found that older adults were more likely than younger adults to accept losing stakes in which the percentage probability of winning (losing) was less than (more than) 50%.

Strikingly, we found a clear reliance on ventral striatal regions in younger adults for processing increasingly valuable choices, as expected. However, older adults instead showed more complex engagement of other brain areas. Specifically, older adults increased neural activity with increasing value in the medial temporal and ventromedial frontal areas, but increased neural activity with decreasing value (higher probability of losing) in the lateral and dorsomedial frontal areas. This pattern of functional brain recruitment mediated greater risk-taking behaviors in older adults. Moreover, such expression of brain activity and decision behaviors was driven by dysregulated baseline fronto-striatal resting-state functional connectivity in older adults. Our findings suggest that older relative to younger adults rely less on neural processing of veridical objective information, as reflected in reduced direct young-like striatal processing, when making economic outcome predictions for decisions. Rather, older adults recruit neural circuits that may integrate other sources of value-based information, such as social or emotional affective cues (in medial temporal and ventromedial prefrontal areas), or they may adhere to alternative economic models (in lateral frontal areas) for value-based decisions.

Our experimental protocol has been evaluated as a potential early brain imaging marker to dissociate older adult individual differences in brain function4. We are now applying it in ongoing studies to evaluate other age-related neuropathological indications in the involved neural circuits in Mild Cognitive Impairment (pre-clinical Alzheimer’s Disease), and Parkinson’s Disease.

Advances in healthcare have almost doubled the average human lifespan within the past 100 years5. By virtue of such extended lifespan, the human species faces a novel problem of being healthy in body through old age but not necessarily healthy in mind. However, we have relatively little understanding and even less control of how the human brain ages, especially in terms of its primary role in information processing. Our work aims to address such knowledge gaps to enhance diagnosis, prevention, and intervention approaches for age-related effects on brain and cognition. 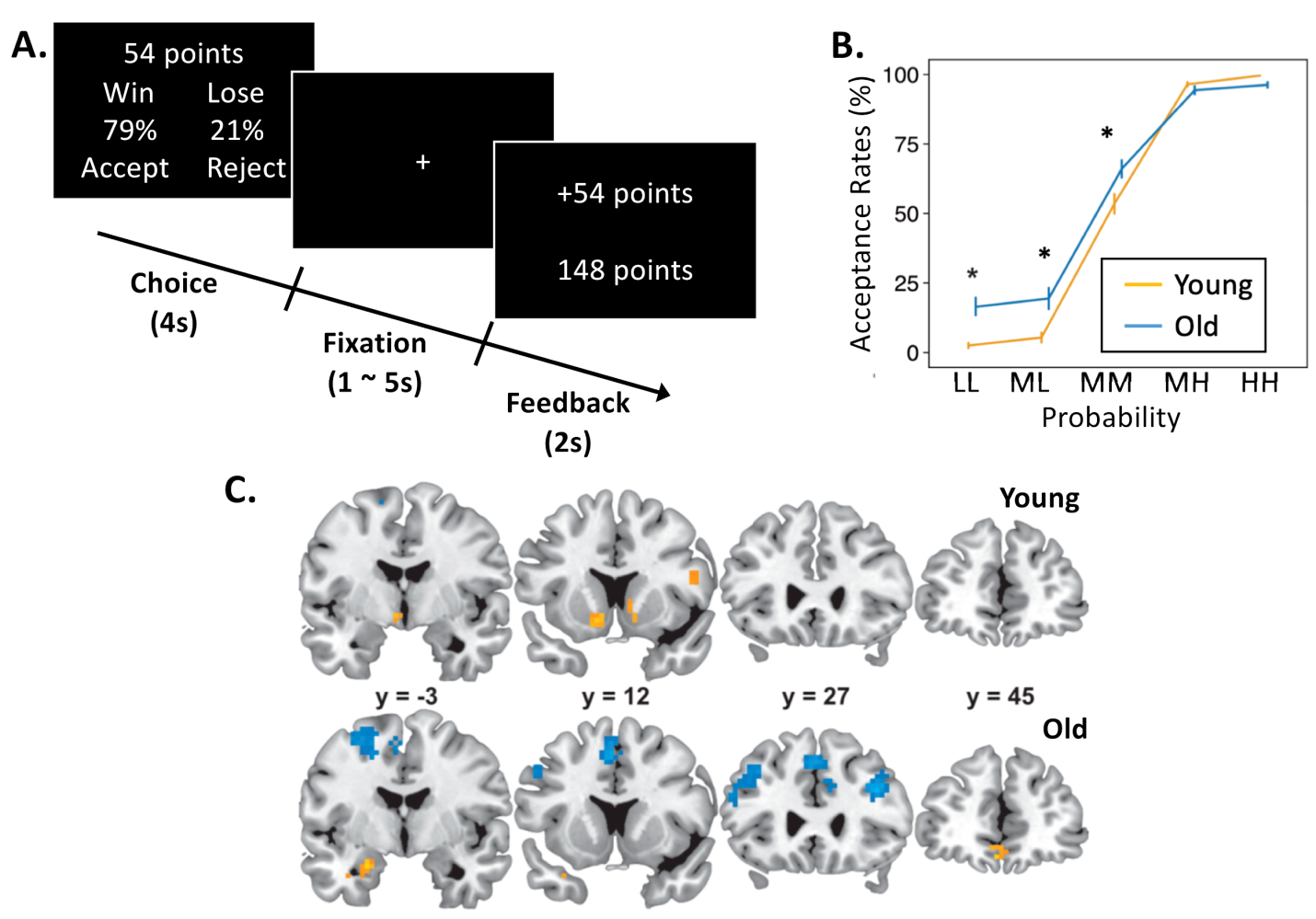