:::HOME / LIFE SCIENCES / Reliability and Validity Analysis of Wearable Devices in Sleep Apnea and Its Medical Applications in the Home 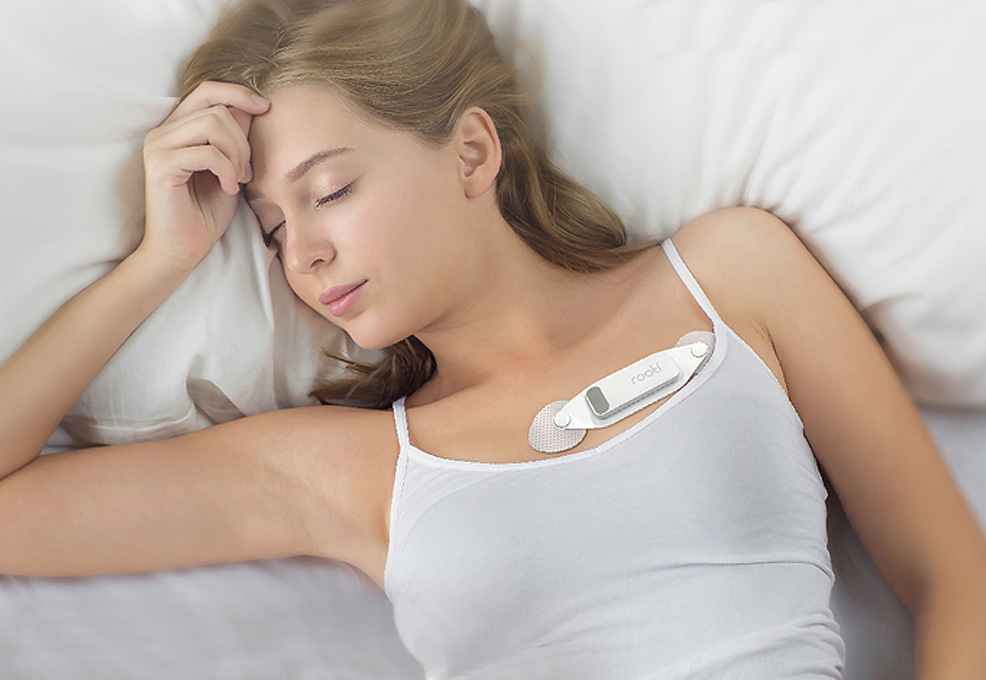 Sleep apnea is the most common sleep disorder. Polysomnography is currently the gold standard for diagnosis. However, the waiting time is too long, and the assessment may be inaccurate due to environmental changes or interference. Therefore, there is an urgent need to develop a simple and accurate home detection device. Dr. Wen-Te Liu integrated the ECG patch system developed by Rooti and applied it to home sleep tests. First, the reliability and validity of the wearable device were analyzed, and then the outcomes obtained from the hospital and home were compared. In identifying patients with severe sleep apnea, the detection accuracy of the device is as high as 88%. In a comparison of the hospital and the home, it was found that the restriction of sleep posture due to wire interference may be the main reason for the overestimation of traditional polysomnography. The wearable device is small in size, low in interference, and can be used for a long time. It can be used as a sharp weapon for home sleep screening and long-term tracking.

Sleep Apnea is the most common sleep disorder. According to research in the United States, more than half of adults have been or are currently suffering from sleep disorders. Due to differences in skull structure, Asians have narrower airways and thus the prevalence of sleep apnea is expected to be higher than that of Europeans and Americans. According to statistics from the Taiwan Society of Sleep Medicine, about one in 10 people in Taiwan suffer from sleep disorders. However, data from the Taiwan Health Insurance Database show that the prevalence of sleep apnea is less than five one-thousandths. The health impact of sleep apnea and the need for examination and treatment has been significantly underestimated. Sleep is a necessary condition for maintaining normal physiological functions. When sleep is insufficient, there will be fatigue, headache, vision loss, emotional agitation, and decreased concentration. Studies have shown that sleep disorders may lead to decreased academic and work performance, increased risk of dementia, and worsening of symptoms related to depression, cardiovascular and respiratory diseases, etc.

The current gold standard for the diagnosis of sleep apnea is polysomnography (PSG). Although the physiological information collected by sleep polysomnography is complete and detailed, it has its limitations and shortcomings: it requires the subject to sleep in the sleep laboratory for one night; in recent years, because people’s awareness of sleep health has increased but the number of beds provided for testing has not increased simultaneously, the waiting time has increased. In addition, changes in the sleeping environment (lights, temperature, odor, mattress softness, etc.), and the need to stick multiple nerve detection wires on the subject, may affect the subject’s sleep quality and structure. Therefore, Dr. Wen-Te Liu strongly advocates the introduction of new technologies into the home, such as the application of simple wearable devices, and artificial intelligence to assist in the diagnosis, daily monitoring, and treatment efficacy evaluation of sleep apnea.

In recent years, many technology companies have actively developed home sleep testing (HST) devices. Dr. Liu led the sleep research team of Taipei Medical University and the Sleep Center of Shuang-Ho Hospital and took the lead in integrating the single-lead ECG patch and recording system developed by Rooti, a startup company in Taiwan (DOH medical device manufacturing No. 005772) which is applied for the detection of sleep apnea. Compared with traditional polysomnography, the wearable device is small in size, causes minimum interference in the subjects of the sleep examination, is light and portable, and is suitable for use in the home.

First, the research team performed reliability and validity analysis on the device. The Cyclic Variation of Heart Rate (CVHR) and the chest movement (Chest Effort, CE) recorded by the wearable device aligned with the Apnea-Hypopnea Index (AHI) evaluated by polysomnography, and established a discrimination model. In order to avoid the possible bias of a single signal, the research team also combined multiple indicators. It was found that when identifying patients with severe sleep apnea, the combination of two physiological signals has the highest recognition rate, reaching 87.8%. Next, in order to clarify whether traditional polysomnography caused inaccurate assessment due to environmental changes and nerve wire interference, the research team compared the outcomes obtained in the home and hospital scenarios. Compared with the home environment, the subjects showed a higher degree of severity in sleep apnea in the hospital, and at the same time, the proportion of sleeping on the back is also significantly higher. In order to understand the extent of the impact, the reasons, and the most susceptible groups, the research team conducted a cluster analysis and found that the subjects who were used to sleeping on their backs at home had the most serious overestimation of their severity when tested in the hospital. When grouped according to the severity of sleep apnea, it was found that the overestimation of severe patients is the most significant. The results show that the sleeping position of the subject is restricted due to the interference of the nerve detection wire, and lying supine is a sleeping position that is prone to sleep apnea events, which causes overestimation of the severity in the hospital-based polysomnography.

With the development of technology and artificial intelligence, many wearable devices have proven the feasibility of applying them to sleep detection. Compared with traditional polysomnography, wearable devices can greatly reduce the cost of medical systems and shorten the waiting time required for diagnosis. When used in a home scenario, the records can better reflect the real situation of the subject. In addition, the wearable device can record for a long time as a tool for disease course monitoring and treatment efficacy evaluation; it can also record heart rate variations and activity levels during the daytime, and with a mobile phone application it can be used as an exercise aid device. During this trial, the research team also collected patient feedback, and provided a number of suggestions for manufacturers to modify and strengthen the product, and improve the use process to facilitate future promotion.