Rubies From Taiwan’s Forest - Taiwanofungus Camphoratus, Its Bioactivity And Metabolites 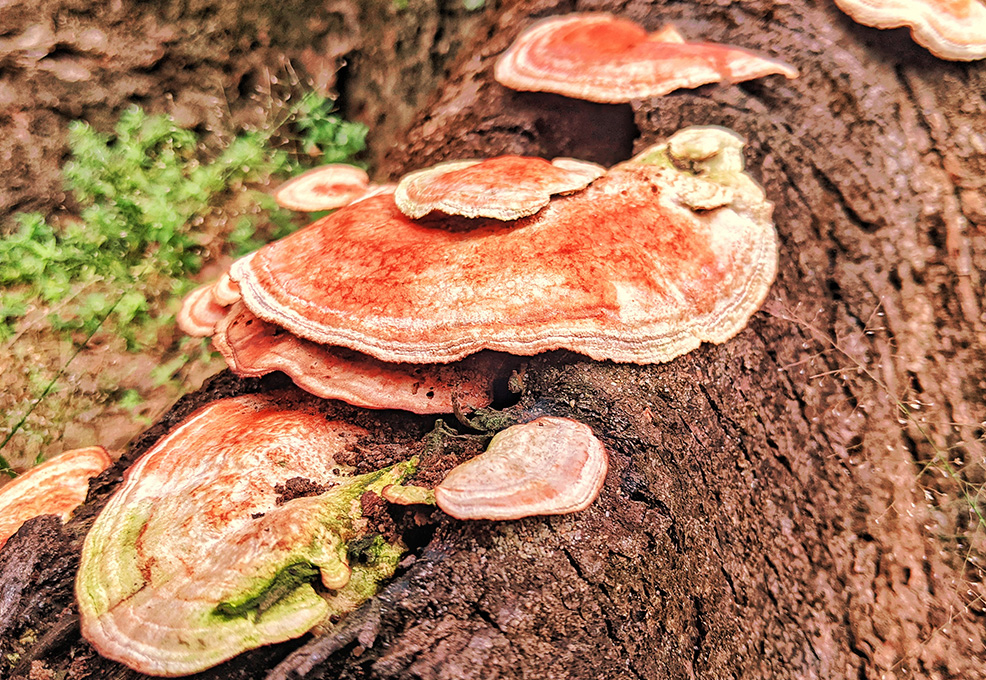 Taiwanofungus camphoratus (Syn. Antrodia cinnamomea) may be one of the most expensive edible and medicinal fungi in the world, with a current selling price of up to US$25,000/kg. It is conservatively estimated that the annual output value of T. camphoratus in Taiwan is about NT$3 billion. In the past decade or so, a research team composed mainly of Taiwanese scientists, and of course scholars from countries such as China and Japan, have published more than 600 scientific research articles, covering topics such as phylogenetic study, genomics, metabolite studies (composition identification, organic synthesis, and biosynthesis), production regulation, biological activity, and toxicology studies. This shows that T. camphoratus is a subject of research that is highly valued by both academic and industrial circles. With regard to the health care function of T. camphoratus, the most important thing for people is still related to cancer-related issues. The content of this article will be a comprehensive review and commentary of our team’s participation in the research and development of metabolism of metabolites study and biological activity. 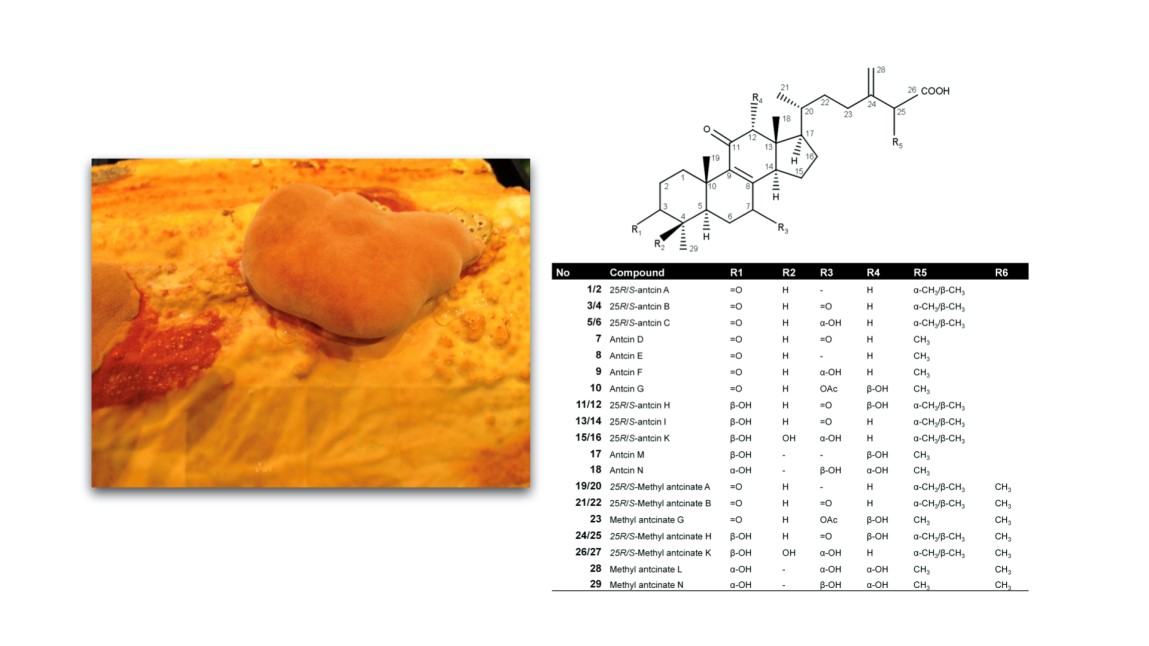 Taiwanofungus camphoratus is an unique medicinal mushroom of Taiwan. It is an endemic and expensive edible mushroom growing restrictedly on the inner cavity of its host species, the Bull Camphor tree, Cinnamomum kanehirae Hayata (Lauraceae). Historically, T. camphoratus was originally consumed by indigenous people of Taiwan as a traditional prescription for the treatment of liver complaints caused by alcohol intoxication. Being a local species, T. camphoratus was also used as a folk medicine for the treatment of various illnesses, including food poisoning, drug intoxication, abdominal pain, hypertension, diarrhea, skin irritation, liver and tumorigenic diseases. In modern Taiwanese culture, T. camphoratus is believed to be a valuable gift from heaven and it is known as the “National Treasure of Taiwan” as well as the “Ruby of the forest.” More than 160 compounds have been identified and structurally elucidated from Taiwanofungus camphoratus. Among them 49 compounds are steroids, including 34 ergostanes and 10 lanostanes.

Our series of studies on the anti-inflammation and anti-oxidative activities of T. camphoratus has obtained specific results. We demonstrated that Antrocamphin A, Antroquinonol, 4-Acetylantroquinonol B, and several Antcins possessed the potent anti-inflammation and anti-oxidative activities, especially through Nrf2 transcription factor’s regulation. For example, our results revealed that Antroquinonol increased the nuclear translocation of Nrf2 as evidenced by accumulation of Nrf2 protein level in the nucleus. This study also showed that Nrf2 activation was regulated by its upstream kinases including p38 MAPK and JNK/SAPK. Further, an in vivo study with male ICR mice strongly supported the in vitro data that antroquinonol protects liver cells from alcohol-induced liver damage, which was confirmed by reduced levels of ALT, AST, and MDA as well as increased levels of GSH in the bloodstream or hepatic tissues, as shown in Figure 1. 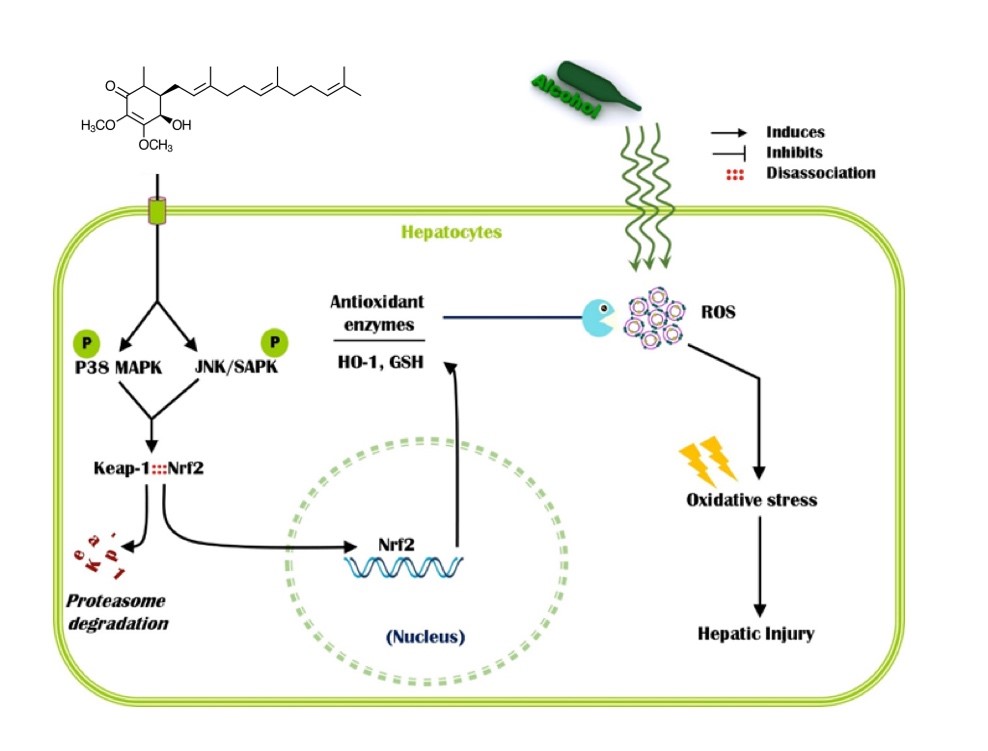 Recently our studies have shown that glucocorticoids (GC) treatment induces microRNA-708 in ovarian cancer cells, resulting in impaired tumor cell proliferation and metastasis. However, the regulatory functions of GCs on miR-708 and its downstream target genes in human breast cancer cells (BCCs) are poorly understood. In this study, we found that treatment with either the synthetic GC dexamethasone (DEX) or the natural GC mimic, Antcin A (ATA) significantly increased miR-708 expression by transactivation of glucocorticoid receptor alpha (GRα) in MCF-7 and MDA-MB-231 human BCCs. BCCs xenograft models indicate that treatment with GR agonists significantly reduced tumor growth, weight, and volume. Overall, our data strongly suggest that GR agonists may be applicable as a novel therapeutic intervention in breast cancer treatment.

In addition, we investigated the modulation of epithelial-to-mesenchymal transition (EMT), anti-migration, and anti-invasive potential of ATA against human breast cancer cells in vitro. We found that treatment with ATA significantly blocked EMT processes, as evidenced by upregulation of epithelial markers (E-cadherin and occludin) and downregulation of mesenchymal markers (N-cadherin and vimentin) via suppression of their transcriptional repressor ZEB1. Next, we found that ATA could induce miR-200c, which is a known player of ZEB1 repression. Further in vitro wound healing and trans-well invasion assays support that ATA could inhibit migratory and invasive potentials of breast cancer cells, and the effect was likely associated with induced phenotypic modulation. Taken together, the present study suggests that Antcin-A could be a lead phytoagent for the development of an anti-metastatic drug for breast cancer treatment (Figure 2). 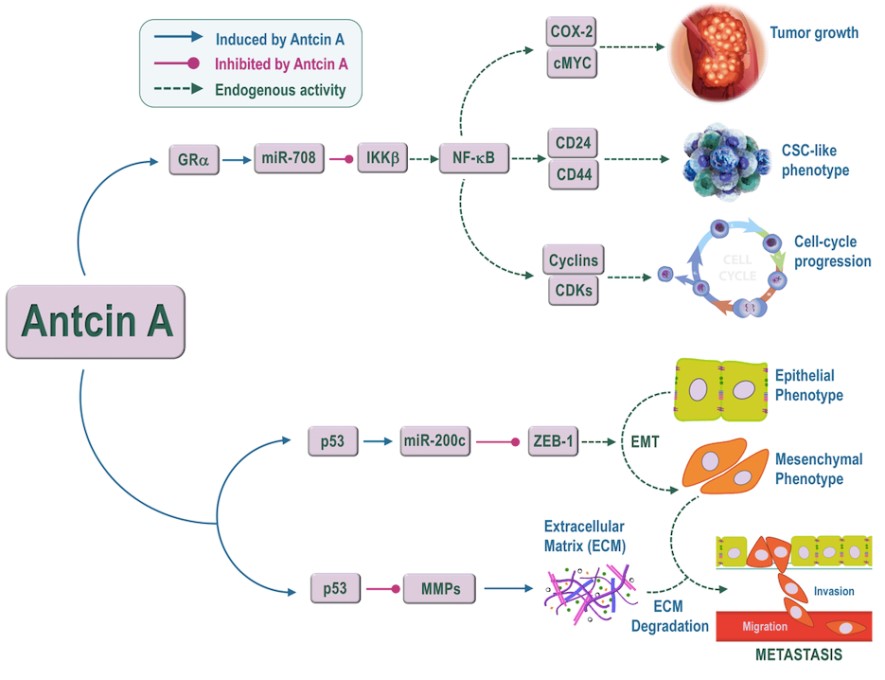 Figure 2. Antcin A activates miR-708 through GRα, which inhibits proliferation and induces cell-cycle arrest in breast cancer cells. Signaling mediated by GR agonists induces miR-708 expression, leading to the suppression of NF-κB, and the downregulation of its target genes COX-2 and cMYC. The present study implies the potential use of GR agonists or their downstream miRNA-708 regulation to inhibit breast cancer tumorigenesis.