Silicon, as the most abundant material on earth, can perform multiple functions of nano-sizing and surface modification. Through several grants from MOST, our nano-sized silicon powders have been well developed with the potential to be the key material for several futuristic green energy technologies. First, as a high capacity anode material in lithium ion batteries, the core technology includes nano-size (<80nm) coating with diamond-like shells and granulation with graphite, resulting in 5 Taiwan and USA patents. Secondly, nano-Si can be made through recycling Si from waste as a reactant to produce hydrogen upon reaction with various kinds of water solution to benefit fuel cells. Finally, SiC, as a 3rd generation semiconductor, demands high quality raw materials. By incorporating purification technology, the purity of our nano-sized Si powders can reach > 99.999%, reacting into high pure α- or β-SiC powders. 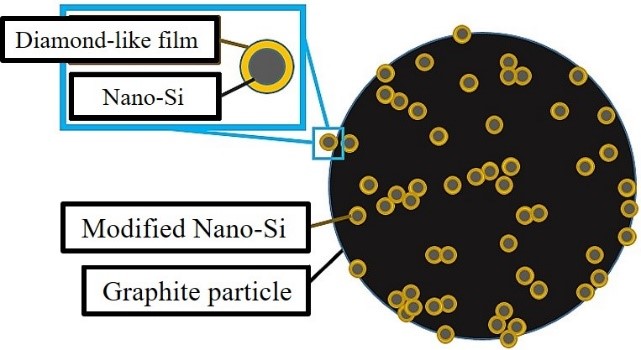 Numerous Nano-Si powders are attached on the surface of a graphite particle, where each Nano-Si particle is modified with diamond-like film coating as the protective layer

As the central issues in the whole world revolve around green energy and pollution, the abundant material of Silicon can be made greenish with multiple functions for miniaturizing into nano-sized silicon (Nano-Si) and surface modifications as green solutions. Better still, nano-Si can be derived from waste Si from the semiconductor and solar industries through recycling, and will not pollute the earth.

Through an international collaboration program funded by MOST in 2012, our mission to work on nano-Si was initiated in Argonne National Lab, where we learned that Si will become a strategic material in the next-generation anode material in lithium ion batteries. Si delivers the highest specific capacity, but suffers from the most serious volume expansion, which has become the most difficult issue to overcome. Supported by various MOST projects over recent years, we have been able to successfully develop nano-Si, including nano-sizing into < 80nm, conformal surface coating with a diamond-like film, granulation with graphite for a tunable surface area (as the figure), resulting in 5 Taiwan and USA patents. The most critical technology is the diamond-like surface coating, enabling nano-Si to have higher electrical conductance and higher mechanical strength for tolerating cracking through cycling compared to the most popular approach of carbon coating. The impressive results using a similar coating but on graphite have been published in Nano Energy 74, 104811 (2020). Ultimately, the pure nano-Si anode can provide a discharge capacity of up to 2500 mAhg-1 with the 1st cycle reversible capacity of 82% and retention of 90% over 200 cycles. For the Si/C composite anode with 8wt% Si, the specific capacity is > 500 mAhg-1 with the 1st cycle reversible capacity of 90% and retention of 94% over 100 cycles, while reaching a practical packing density of > 1.5 gcm-3. The best 3Ah full-cell reaches > 80% retention over 600 cycles, when paired with a NCM 532 cathode. The Nano-Si can be further made into 1-10µm SiOx powders, by which the SiOx/C composite anode with 5 wt% SiO reaches >420mAhg-1 with the 1st cycle reversible capacity of 89% and 95% retention over 100 cycles. Apparently, our developed Nano-Si and SiOx powders have reached a world-leading position.

Fuel cells, regarded as the cleanest green energy source, have been vigorously promoted; however, further advance is seriously plagued by the cost and safety of purification, storage and transportation of hydrogen. Our Nano-Si, derived from waste Si, is characterized by low coat, single crystallinity, uniform nano-size distribution, and safe handling, and can be reacted with various types of water solution with appropriate additives into high pure hydrogen. The in-situ hydrogen production without the need for storage and transportation make Nano-Si a potential way to promote the advancement of portable energy generators as well as stationary fuel cells. Besides, due to the fast-growing market in electric cars and micro-wave communications, there is high demand for SiC. Nevertheless, SiC crystal growth suffers from the need for high purity raw materials. Via the developed purification technology, single crystalline Nano-Si can be made ultra-pure with purity > 99.999%, resulting in unique features for enhancing surface reactions by lowering the melting temperature, and improving the purity and yield of SiC powders. The Nano-Si is a great choice for making low-cost and high-purity α- or β-SiC powders.