Forming the Solar System From Scratch With Hints From the Meteorites

:::HOME / NATURAL SCIENCES / Forming the Solar System From Scratch With Hints From the Meteorites 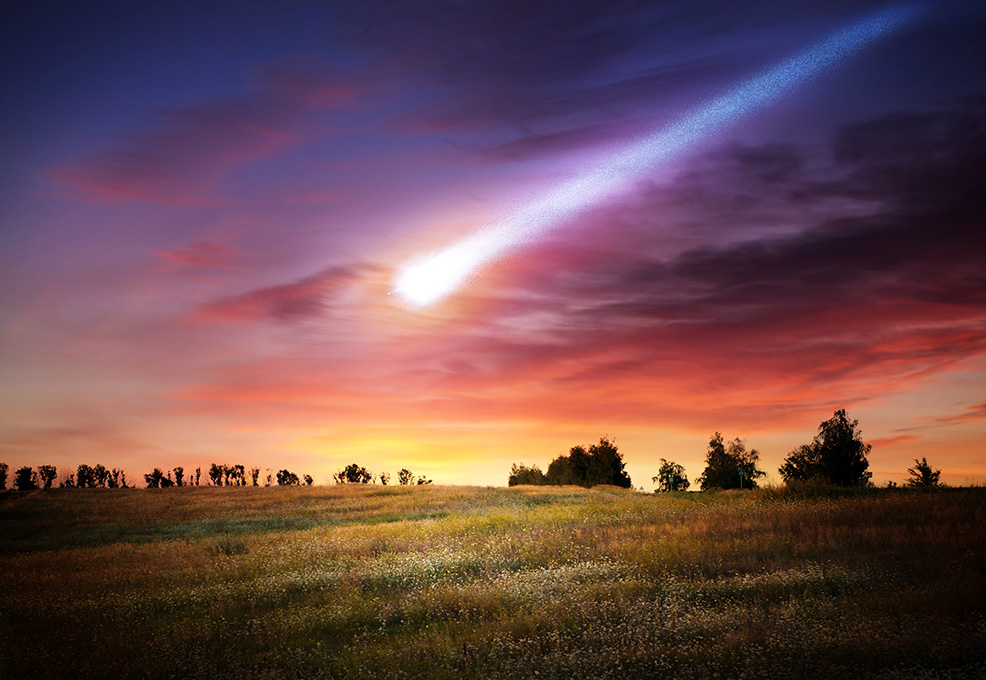 Between the two communities of star formation and proto-planetary disk evolution, there have only been a few efforts to bridge the gap between a collapsing pre-stellar core and a developed disk. While it has generally been accepted for about a decade that the magnetic field and its non-ideal effects play important roles during stellar formation, simple models of pure hydrodynamics and angular momentum conservation are still widely employed in the studies of disk assemblage due to their simplicity in the framework of the so-called “alpha-disk” model. Thus, we performed state-of-art magneto-hydrodynamics simulations, which takes into account the non-ideal effects of ion-neutral friction, and considers full radiative transfer for the temperature calculation. We found that, during the disk assembly phase, the transport of material inside the proto-planetary disk is mostly dominated by the laminar motion rather than by the turbulent diffusion, while in the envelope region, a significant amount of angular momentum is removed by the magnetic field lines before matter reaches the disk. 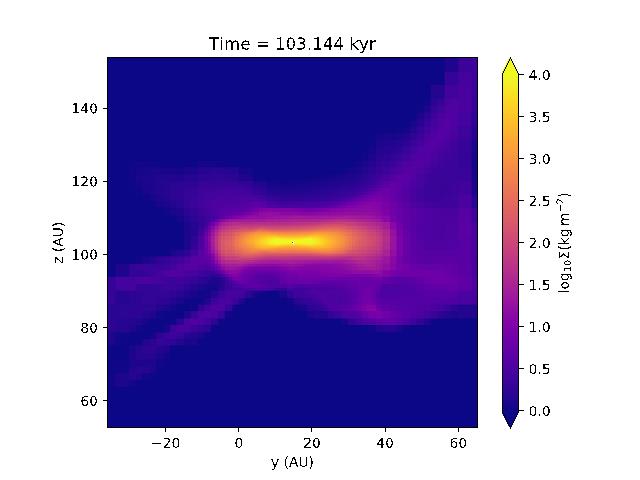 The history of the Solar System and the Earth lies within the records of ancient rocks. The elemental composition of the Universe is dominated by hydrogen and helium, which were created during the Big Bang. Enrichment of heavier elements, so-called metals by astronomers, occurred after the birth and death of generations of stars. Most of these metals, forming complex molecules and minerals, float in the interstellar space in forms of dust grains. The primordial material, out of which our Solar System formed, initially had dust particles that made up around one percent of the total mass. The diffuse Solar Nebula collapsed under the action of gravity, forming the proto-Sun and a gaseous proto-planetary disk orbiting around it. The proto-Sun, with the hydrogen nuclear fusion ignited, started to irradiate, and heated up everything that fell close to it: the gas and dust grains in the proto-planetary disk and those falling onto the star-disk from its dense envelope. The result was an almost complete evaporation. The elements in the dust grains were broken apart and released into the gas phase. Later on, new minerals would form from condensation when the material can escape away from the melting heat of the proto-Sun.

It is commonly accepted that the different types of minerals represent a sequence of condensation in time and in temperature. In the proto-planetary disk, matter can be transported outwards through turbulent diffusion. When moving away from the Sun, ions in the gas phase can cool down and form minerals according to the temperature and pressure conditions, starting from high to low temperature, or from refractory to volatile minerals. The calcium-aluminium-rich inclusions (CAIs) are the irregular white patches seen in carbonaceous chondritic meteorites. They were the first minerals that formed in the Solar System. Having a condensation temperature of around 1500 K, they are the most refractory minerals in the Solar System. Isotopic dating of the CAIs defined the time zero of the Solar System (4.567 billion years ago) to a very high precision.

Minerals recorded the physical and chemical conditions at their place and time of birth. Here is our big problem though: they did not stay in the same place! CAIs should have formed close to the proto-Sun, likely within a few astronomical units (the Earth-Sun distance, 1AU=150 billion meters). However, they are found in meteorites falling from all regions of the Solar System, even in comets that come from hundreds of AU away, an extremely cold place. Significant mixing must have happened during the formation phase of the Solar System. It was only after most of the gas was dispersed that most objects in the Solar System stabilized to their current locations.

To reconstruct the formation history of the Solar System, we need to understand the dynamics and thermodynamics of the proto-planetary disk before and during its formation, and to match such evolution with the measurements available from meteorites. Star formation from a dense pre-stellar gaseous core (thousands of AU in size) that collapsed out of the diffuse interstellar medium is an active area of research and is more or less well understood. Many studies also focus on the dynamics and matter transport in an isolated disk, i.e., no matter feeding from the collapsing envelope outside. Our research team aims to bridge the gap between the two scales, and to understand how the disk should behave during its building phase. This phase corresponds exactly to the epoch when minerals were forming. Neglecting the envelope could potentially obliterate our understanding of the early Solar-System dynamics, while most existing studies resort to very simplistic disk assemblage models.

We revisited the assemblage phase of the proto-planetary disk with more up-to-date knowledge of the pre-stellar core collapse. We performed 3D magneto-hydrodynamic (MHD) simulations with the ambipolar diffusion and full radiative transfer to follow the formation of the proto-planetary disk within a collapsing pre-stellar core. The global evolution of the disk and its internal properties were then analyzed to understand how the in-falling envelope regulates the buildup and evolution of the disk. We follow the global evolution of the proto-planetary disk from the pre-stellar core collapse during a hundred thousand years with a resolution of 1 AU. We developed a zoomed rerun technique to quickly obtain a reasonable disk that is highly stratified, weakly magnetized inside and strongly magnetized outside. Two snapshots from this reference run are extracted and then rerun with significantly increased resolution (0.01 AU) to resolve the disk interior.

The disk that forms under our simulation setup is more realistic and is in agreement with recent observations of the disk around class 0 young stellar objects, which are mostly small in size. Most of the mass that falls from the collapsing envelope reaches the disk at a very small radius, implying that a significant fraction of the stellar mass is accreted directly from the envelope without transiting through the disk. The disk mass is accreting inwards only at high-altitudes, while the mid-plane of the disk is almost dead to turbulence, and outward laminar transport even happens at some moments. Our findings provide supports to revise the existing models of disk formation. With most material not passing through the disk, its role needs to be reconsidered when studying the early Solar System. 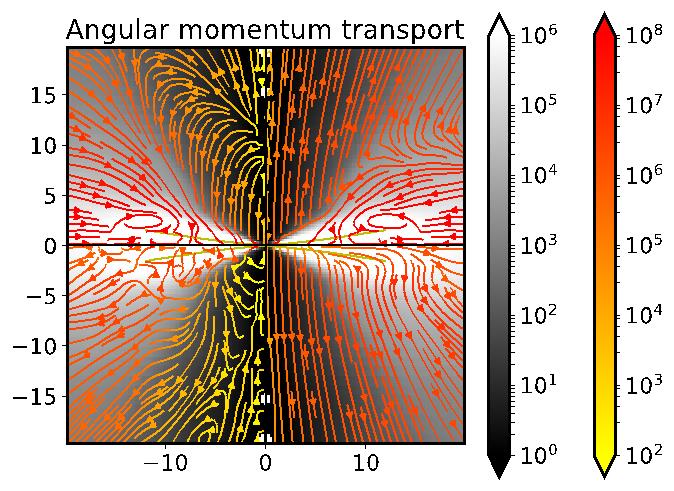 Figure caption: Angular momentum transport within the envelope-disk region. Azimuthally averaged quantities are shown (in SI units). The specific angular momentum is shown with gray scale and its flux by laminar transport, turbulent transport, magnetic transport, and the total flux are shown from the upper left quadrant counter-clockwise.