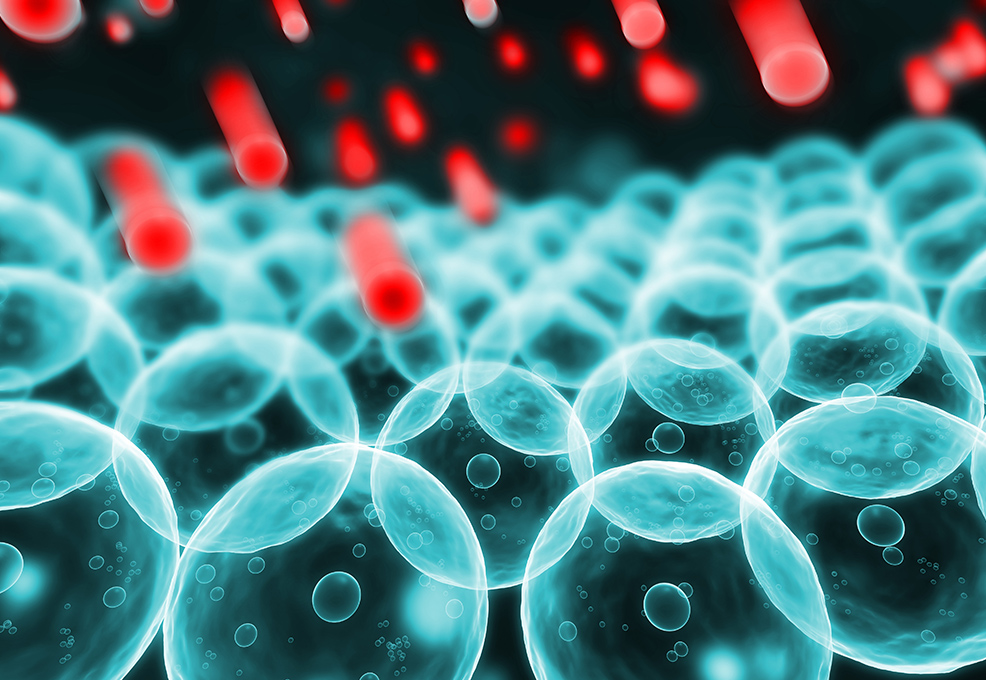 A free radical has an unpaired electron and is inherently unstable and reactive. Not all radicals are “bad” and harmful to the human body. There are also good radicals which play important roles in nature. Thus, we seek to reveal the beauty of the underlying mechanism by which good radicals are generated and operate in chemical systems, with the radical events probed by a home-built Electron Spin-Echo spectrometer complemented by DFT calculations. In lysine-5,6-aminomutase, the cofactor vitamin B12-derivative generates a 5'-deoxyadenosyl radical, which is ubiquitous across all kingdoms of life, as a primary high energy free radical, to initiate the radical-mediated covalent bond catalysis. The enzyme controls the radical reaction trajectory exquisitely with specificity to overcome the chemically challenging 1,2-amino rearrangement between adjacent carbons, with the help of another cofactor vitamin B6-derivative and an elegant protein conformational movement. In another example, we functionalize TiO2 nanoparticles with cyanamide (NCN2-), acting as a visible photon sensitizer, to generate an electron-hole radical-pair for environmental remediation and green energy H2 production. These are “good” radicals. The active-site of lysine-5,6-aminomutase is flexible and thus has potential as a bio-catalyst for the pharmaceutical industry. The NCN2-—TiO2 is a potential candidate, capable of direct charge injection from cyanamide- to excited Ti-3d orbitals, for photovoltaic application. The complexities of radical enzymology and radical chemistry of nanomaterials are multidisciplinary in nature. Therefore, the education and training of postdoctoral researchers and students to master a diverse array of skills from gene manipulation to high-frequency microwave engineering is also an integral part of our research activities.

The Good and Bad Radicals.

There are good radicals and bad radicals in Nature. Radicals are always considered to be “bad” and are associated with destruction by the general public, because a large number of diseases, such as cancer, aging, diabetes and Alzheimer’s disease, are caused by the existence of radicals or by the invasive role that radical components play in their pathological states. Nevertheless, bioinformatics predicts an emergent class of enzymes, with more than 100,000 enzymes across all kingdoms of life, that harness the extreme reactivity of “good” radical species to carry out some of the most challenging chemical reactions in biology. The study of this class of enzymes has become the mainstream of enzymological research. In addition, the use of electron-hole radical pairs in initiating radical chemistry, in a controlled manner, on the surface of semiconductors for the development of technological grade photocatalysts has received significant attention in nano-material research. Research of these “good radicals” will be an exciting area in the next decade.

Radicals are atoms or molecules with an unpaired electron (spin). Electron Spin Resonance (ESR) associated spectroscopies can provide information about the radical identity, its location in the system, and how it may react with the surroundings for predicting the radical reaction-coordinates. Thus, ESR is the prime choice for probing the radical manners in radical-containing systems. Supported by MOST, Dr. Ke constructed a home-built state-of-the-art "Nanoseconds time resolved pulsed Electron Spin Echo spectrometer." The guiding principles of the design and construction are flexible, both in terms of the hardware and the software, for vast applications. The features can ensure immediate implementation of the current developments. The spectrometer has two distinguished features that are not commercially available: (1) the 2-18 GHz broadband operation varies the interplay between Zeeman, hyperfine, and nuclear quadrupole splittings; (2) the synchronized laser-ESR pulse operation produces a series of time-resolved "snap-shots" of the evolving chemical events. The instrument is open to the scientific community.

Our research of good radicals has two focuses:

1) Understanding how radicals mediate covalent bond catalysis in enzymatic systems is one principal focus. The involvement of 5'-deoxyadenosyl radical (5'-Ado) in initiating enzymatic radical chemistry is ubiquitous, and Nature has been able to control its reaction trajectory exquisitely with specificity. We believe there may exist an internal stabilization mechanism for the highly reactive 5'-Ado to serve in this capacity. Using different chemical tactics, vitamin B12 (Adenosylcobalamin) and SAM (S-adenosyl-L-methionine) serve as the biological source for 5'-Ado. From an evolutionary perspective, the structurally more elegant B12 is considered as a successor to SAM; however, radical SAM enzymes still massively outnumber the B12 enzymes. Thus, we seek to understand what promotes Nature to use the {[4Fe-4S]-SAM} ancient construct as the 5’-Ado generating machinery across all kingdoms of life, rather than its successor B12. The B12-dependent lysine-5,6-aminomutase and the SAM-dependent glutamate-2,3-aminomutase have been chosen for scrutiny. Both enzymes require the participation of vitamin B6 as another cofactor for the chemically challenging isomerization. We probe the radical chemistry by providing snapshots of the evolving radical states, using various substrate and cofactor analogs. The complexity of radical enzymology is multidisciplinary in nature. We integrate biochemistry, enzymology, organic synthesis, DFT computation and spectroscopic techniques in a theme to address the radical chemistry related problems in these enzymes. Some of the results of the study of 5,6-LAM have been published in highly esteemed journals and translated into the reaction-coordinate Figure. The broad substrate specificity of 5,6-LAM and understanding of the mechanistic studies of the substrate-protein interaction have led us to believe that the active-site of 5,6-LAM is flexible enough to be employed to synthesize important building-blocks for the synthesis of pharmaceuticals.

Figure 2: The radical reaction mechanism of lysine 5,6-aminomutase and references for the details.

2) The second focus is the elucidation of the radical chemistry occurring on the surface of TiO2 or g-C3N4, with an emphasis on understanding the kinetics and dynamics of photogenerated charge carriers on these materials. We synthesize new materials to improve charge separation for better photoefficiency. We are designing novel active species on several semiconductors and developing stable protocols for their conjugations with biomaterials for various applications. The major findings include the development of a highly efficient and selective synthetic route for vitamin B6 analogs using green TiO2 as a catalyst, new sites for effective hole trapping (created by diffusing Ti interstitials to the surface to dissociate absorbed O2 with concomitant formation of surface TiO2 islands), and a novel organic molecule-based gap-state in the TiO2/g-C3N4 heterostructure. These results have been published in highly esteemed journals and are illustrated in the Figure. Of particular interest, the novel NCN2-—TiO2 photocatalysts are capable of direct electron-injection from the cyanamide -orbital into the conduction band of TiO2, leaving a hole behind at the cyanamide. This unique property is highly desirable for photovoltaic application and should be explored further.

In the future, we will continue to educate and train postdoctoral researchers and students to master a diverse array of skills from gene manipulation to high-frequency microwave technology.