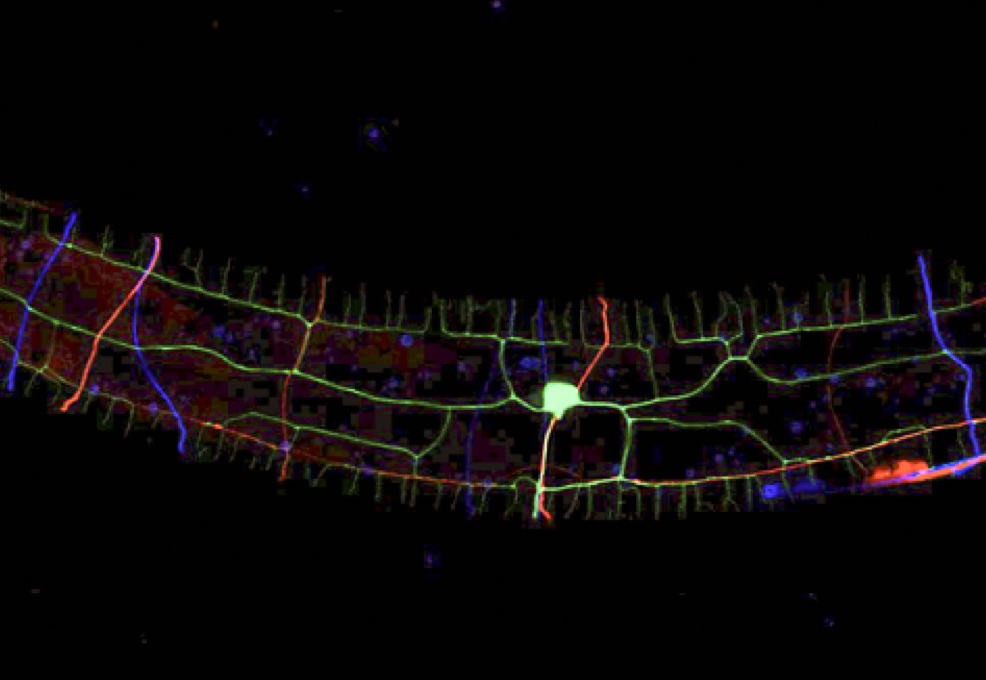 Understanding the molecular basis of neuronal morphogenesis is instrumental in decoding the network basis of brain and cognitive functions. The Pan lab at National Taiwan University identified a new form of axon-dendrite bundling in the roundworm C. elegans. The research showed that this novel axon-dendrite bundling involved conserved cell surface proteins, LICAM and Robo, which provide adhesive signaling essential to bundling axons and dendrites. Previous studies have found that mutations in human Robo genes caused hereditary neuropathy of cranial nerves, further highlighting the importance of findings in C. elegans. L1CAM-Robo controlled dendrite morphogenesis by promoting cytoskeletal dynamics in the tip of the growing dendrite, and disruption of L1CAM-Robo signaling resulted in stalled dendritic growth and defects in animals’ locomotion. This work provides mechanistic insight into the molecular pathways that sculpt neuronal circuitries via axon-dendrite interaction.

How does a neuron build its sophisticated architecture that enables the many intricate functions of the nervous system? A study published by the lab of Chun-Liang Pan, professor and director of the Institute of Molecular Medicine, National Taiwan University, found that bundling between dendrites and axons, two distinct neuronal processes that have unique molecular compositions and functions, can sculpt the fine morphology of the dendrite arborization. This dendrite-axon bundling is important for the animal to properly sense mechanical stimuli both from the exterior and the interior environment. This is the first evidence that dendrites form fascicles, or bundles, with axons. Pan and Chun-Hao Chen, postdoc and first author of the paper, reported their finding in the journal DEVELOPMENTAL CELL.

Dendrites are neuronal processes that receive information to enable neural computation. The numerous dendrites of a neuron do not grow in a random fashion. Rather, they mostly follow certain rules such that more peripheral branches come successively from proximal dendrites. While the gross morphology of dendritic arborization has been thought to be largely determined by genetic programs that specify neuronal types, evidence has emerged that interactions between neurons also shape dendrite morphology. Different axons of the same neuronal type can bundle together to facilitate their projection to other brain areas, but it is not known whether dendrites also bundle with axons to foster their development.

The Pan lab addressed this question using Caenorhabditis elegans, a Nobel Prize-winning, tiny roundworm that has become a prominent model of modern neurobiology research. In C. elegans, the PVD neuron detects mechanical stimuli applied to its skin surface and presumably also muscle tension generated while it is crawling. The proximal dendrites of PVD bundle with the axon from another neuron, ALA. Chen found that PVD dendrites went wrong when ALA or its axon was disrupted using genetic tricks. By systemically investigating molecules that may have adhesive functions and are predicted to be on the membrane of PVD and ALA, Chen identified SAX-7/L1CAM and SAX-3/Robo as a ligand-receptor pair that bundled ALA axons and PVD dendrites. SAX-7 on the ALA membrane binds SAX-3 on PVD dendrites, holding ALA axon and PVD dendrite as a tight bundle. In the absence of either SAX-7 or SAX-3, PVD dendrites wandered about and resulted in aberrant dendrite arborization. Using high-speed fluorescent microscopy, Chen produced movies that documented the dynamics of F-actin, a major protein polymer that supports cell shape and movements, when PVD dendrites actively grew. The movies suggested that adhesion between ALA and PVD help to align F-actin dynamics with directional extension of the dendrites. 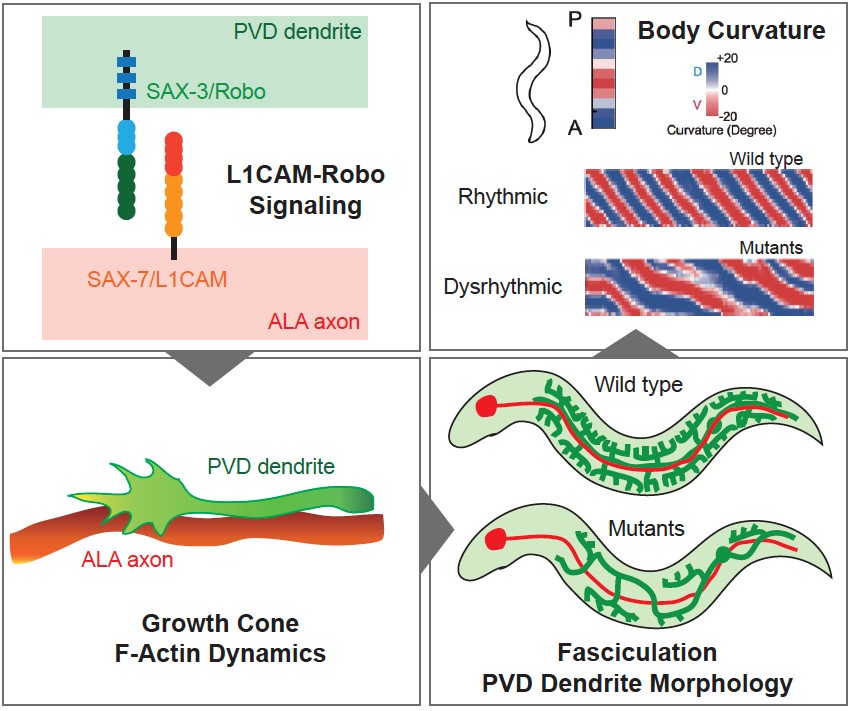 Figure 1. Graphic summary of the L1CAM-Robo pathway that instructs bundling of the ALA axon and PVD dendrite in C. elegans. Adapted from Chen et al., (2019).
Interestingly, when ALA-PVD bundling was disrupted, the worm had a problem detecting mechanical stimulation, and it also failed to generate highly rhythmic waveforms during locomotion, two functions that the PVD neuron serves. These findings indicate that bundling with an axon is crucial for the dendrites to have proper morphology and functions.
Chen obtained his PhD under the mentorship of Pan, and conducted this research as a postdoc in the lab. Supported by a postdoctoral fellowship from the Ministry of Science and Technology (MOST), Chen is now at California Institute of Technology to continue his journey into neuroscience, and recently he was awarded the prestigious MOST Grant for the Einstein Program. Pan attributes the success of this project to Chen's talents and passion for science, as well as the imaging expertise of Hwa-Man Hsu at the First Core Lab of NTU College of Medicine. Other authors include Hao-Wei Hsu and Yun-Hsuan Chang, both graduate students of the Institute of Molecular Medicine at the time of the study.
Reference:
Chen CH, Hsu HW, Chang YH, Pan CL. (2019) Adhesive LICAM-Robo Signaling Aligns Growth Cone F-Actin Dynamics to Promote Axon-Dendrite fasciculation in C. elegans. Developmental Cell 48: 215-228.
RELATED