Decoding the Non-Coding: A Step Closer to Oral Cancer Screening and Treatment 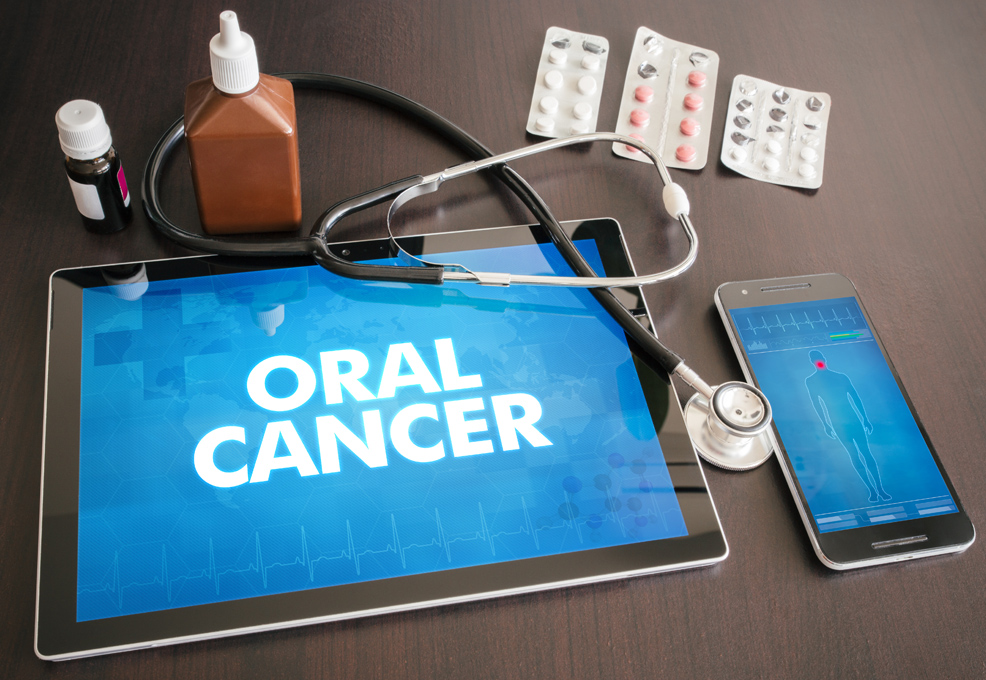 Metastasis is the major cause of cancer morbidity and mortality. Notably, among rapidly growing solid tumors, hypoxia (low oxygen) is a common feature closely associated with tumor metastasis and poor prognosis, and a critical contributor to malignant progression and aggressive phenotypes. Upon hypoxia, the activation of HIF-1 signaling pathways and its downstream target genes is associated with an aggressive tumor phenotype and poor clinical outcomes in numerous cancer types, including oral cancer, one of the most common malignancies worldwide with a high mortality rate mainly owing to the lack of early detection markers, and frequent association with metastasis. Thus, there is an urgent need to identify biomarkers and therapeutic targets for this disease. The recent discovery of long noncoding RNAs (lncRNAs) has gained widespread attention due to its function as a new layer of biological regulation, its emerging links to various human tumors, as well as potential clinical applications. Interestingly, these RNAs have been implicated in hypoxia/HIF-1-associated cancer progression through largely unknown mechanisms.

We identify MIR31HG/LncHIFCAR (long noncoding HIF-1α co-activating RNA) as a hypoxia-inducible lncRNA, and describe its oncogenic role by modulating HIF-1 transactivation ability through direct interaction with it. LncHIFCAR level is substantially upregulated in oral carcinoma, and is significantly associated with poor clinical outcomes, therefore representing an independent prognostic predictor. Knockdown of LncHIFCAR impairs the hypoxia-induced tumor sphere-forming ability, metabolic shift and metastatic potential. Our results uncover an lncRNA-mediated mechanism for HIF-1 activation and establish the clinical values of LncHIFCAR in prognosis and potential gene-targeted therapeutic strategies for oral cancer.
What is the primary obstacle to the treatment of cancer? The high prevalence of tumor metastasis, which severely affects patients' quality of life and survival time, is the major cause of treatment failure in cancer patients. Therefore, over the past century, cancer research has intensively focused on these multistep processes. Among different cancer types, oral cancer, which is the fourth cause of male cancer-related death in Taiwan, is a major global health problem with an annual incidence of over 500,000 new cases diagnosed. Surgery, radiation and chemotherapy are the standard primary oral cancer treatments. However, due to local recurrence and regional lymph node metastasis, the prognosis of advanced stage oral cancer patients is still poor. Currently, visual screening combined with biopsy is the most common screening approach for oral cancer, but might provide insufficient information which results in under-diagnosis and improper care. In addition, the invasive nature, high cost, site-specificity, and technique sensitivity make biopsy unsuitable for follow-up purposes. Thus, there is an urgent need to develop prognostic biomarkers to identify early-stage oral cancer. Notably, several common features may lead to metastasis and predict disease-specific survival. One of them is hypoxia (low oxygen). However, measurement of intratumoral hypoxic status is currently not clinically practicable. Thus, identification of the hypoxia-associated biomarkers and development of therapies targeting the hypoxia signaling axis may open new avenues to combat oral cancer.
Recent high-throughput technologies combined with bioinformatics analyses revealed a new and important class of non-coding RNAs, long non-coding RNAs (lncRNAs) with vital functions in cellular processes. Currently, close to 30,000 transcripts have been annotated as lncRNAs. Although fewer than 1% of them have been functionally characterized, these RNAs participate in a variety of biological steps and cancer pathogenesis. Of note, due to their unique RNA properties, lncRNA may potentially serve as novel biomarkers and therapeutic targets. Indeed, several lncRNAs have already been utilized in clinical practice. Over the past decade, key roles of lncRNAs in hypoxia-driven cancer progression have begun to emerge. A number of hypoxia-responsive lncRNAs play pivotal roles in regulating hypoxic gene expression through largely unknown mechanisms. 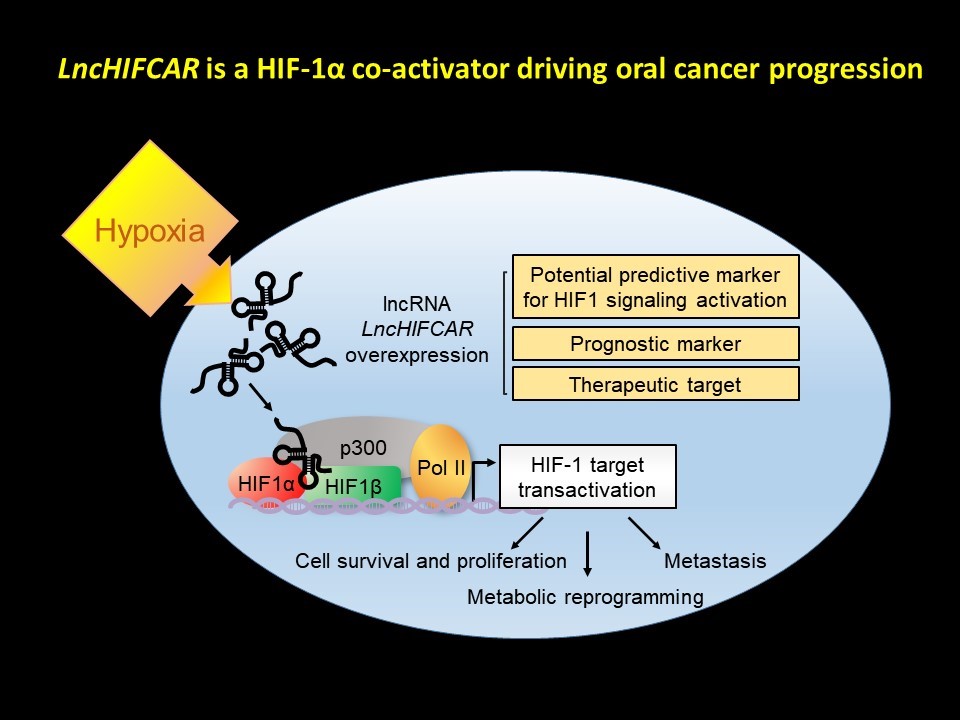 The central transcriptional factor coordinating the cellular hypoxia response is HIF-1α, which complexes with HIF-1α and the histone deacetylase p300 to form HIF-1 complex, thereby upregulating a series of downstream target genes. We identify LncHIFCAR (long noncoding HIF-1α co-activating RNA) as a hypoxia-inducible lncRNA, and describe its oncogenic role as a critical component of this complex regulating the HIF-1 transcriptional network, which is crucial for cancer progression. LncHIFCAR is required for the HIF-1 complex assembly, and could facilitate the recruitment of HIF-1 complex to the chromatin target sites. Overexpression of LncHIFCAR alone under normoxia could induce a pseudo-hypoxia signature in a dose-dependent, HIF-1 specific manner, whereas knockdown of LncHIFCAR under hypoxic conditions impairs the hypoxia-induced HIF-1 transactivation, sphere-forming ability, metabolic shift and metastatic ability to colonize in the lung. Verified by histology, a significantly increased incidence of pulmonary metastasis was observed in the mice bearing control oral cancer cells, whereas only rare tumor foci were found in the lungs of mice carrying LncHIFCAR knockdown cells. 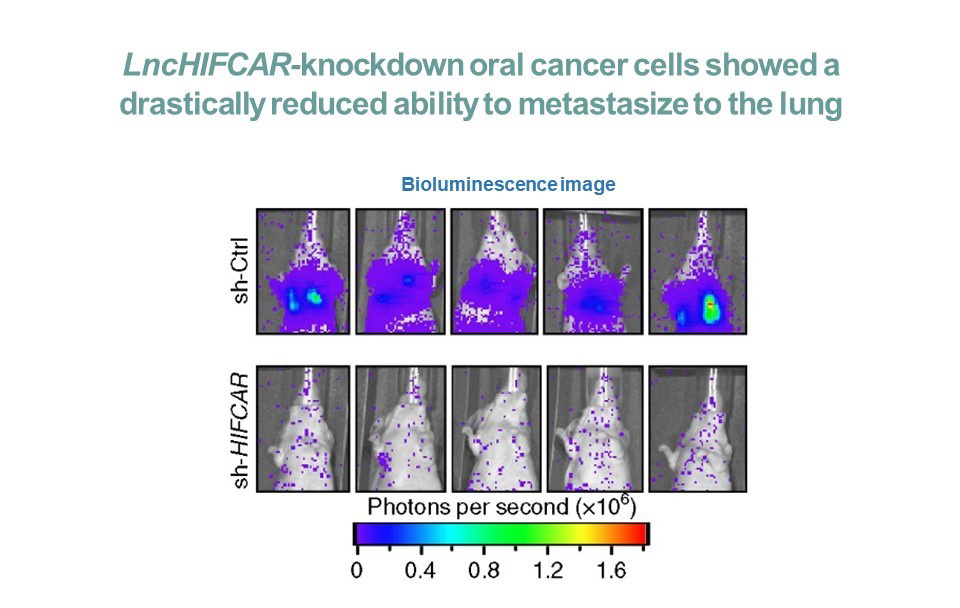 Notably, LncHIFCAR was greatly up-regulated in OSCC in our and others’ analyses of both western and Taiwanese populations. This enhanced LncHIFCAR signature has also further validated using miRNA/lncRNA expression profiles of patients with colon adenocarcinoma, glioblastoma breast and oral cancer from The Cancer Genome Atlas (TCGA) and Gene Expression Omnibus (GEO) databases. In addition, oral cancer patients with high LncHIFCAR expression levels had a significantly worse overall survival and recurrence-free survival rate than those with low LncHIFCAR expression. Most remarkably, multivariate analysis uncovered the clinical relevance of LncHIFCAR as an independent adverse prognostic predictor for the oral cancer progression. Given its significance in the HIF-1 signaling pathway, LncHIFCAR represents a novel and potential therapeutic target for the treatment of OSCC.
One of the unmet clinical needs in managing oral cancer patients is the identification of reliable biomarkers for early detection. Currently, most of the protein biomarkers identified for oral cancer are not clinically accessible, nor do they harbor sufficient sensitivity. Using lncRNA as a biomarker has, however, been shown to hold several advantages in light of its sensitivity, specificity, stability and easy accessibility. We uncovered a remarkable value of LncHIFCAR for oral cancer prognosis with the following evidence. First, a high LncHIFCAR level strongly associates with poor survival of oral cancer patients. Second, LncHIFCAR expression strongly correlates with poorly differentiated oral cancer, which is known to display early metastasis, and a high relapse rate and predicts poor outcomes in the patients. Finally, the multivariate analysis identified high LncHIFCAR as an independent risk factor for recurrence-free patient survival. Meanwhile, for decades, HIF-1 and its downstream effectors have long been recognized as potential targets for cancer drugs due to their profound impacts on cancer progression. However, the complexity of the HIF-1 signaling network has made the design of its inhibitors very challenging. Recently, RNA-based lncRNA targeting has been increasingly considered as a promising therapeutic strategy for cancer treatment. Because of the high expression level and the roles in HIF-1 activation in oral cancer, LncHIFCAR has great potential to be developed as a specific target for therapy. The roles of LncHIFCAR in HIF-1α co-activation and the translational relevance of LncHIFCAR described by our work not only provide new insights into HIF-1 activation but also reveal a potential utility of LncHIFCAR in prognosis and therapeutic strategies for oral cancer. We are also excited about the insights these findings have brought to the mechanism of acute ischemic stroke, because hypoxic tissues are often observed in this disease.
It has been shown that circulating noncoding RNAs could serve as potential disease biomarkers with high specificity, sensitivity, and noninvasive characteristics in clinical practice. This RNA-based liquid biopsy provides a minimally invasive alternative to profile molecular signatures for early-stage cancer detection, disease progression prediction and drug response monitoring to offer personalized therapeutic options. Given that LncHIFCAR is an RNA molecule crucial for hypoxia-mediated cancer progression and could be detected in body fluid in our test, our research group is currently implementing in-depth studies in validation of the clinical relevance of circulating LncHIFCAR, as well as genetic studies in patients with advanced oral cancer, hoping that these efforts could help identify novel biomarkers and preventive strategies beneficial to the patients. 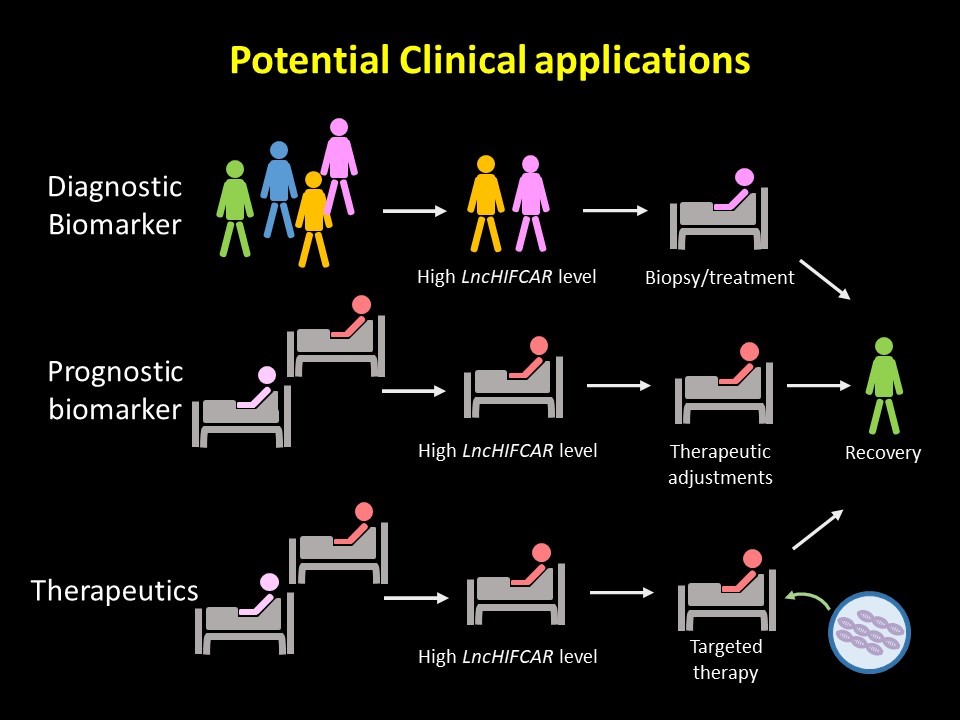