:::HOME / ENGINEERING & TECHNOLOGIES / Development of in vitro Brain Models as a Platform for Neurodegenerative Disease Understanding and Drug Discovery 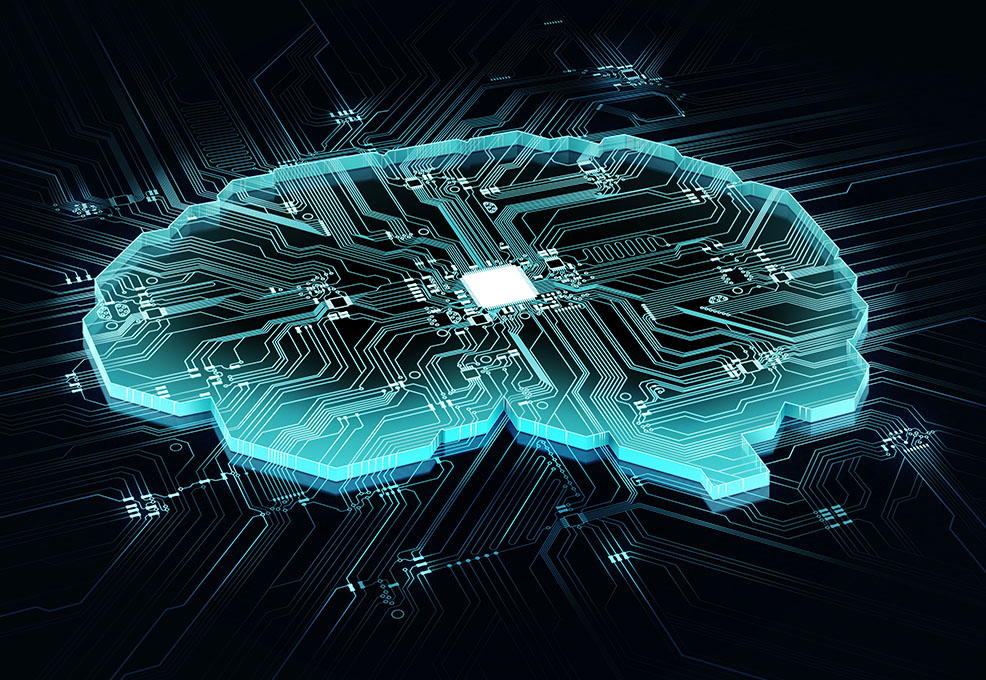 Cellular responses occurring in tissues are often lost in conventional 2D monolayer cultures, limiting the predictive capability of screening assays. Besides, traditional animal models cause the loss of animal lives and have variance that makes it difficult to reproduce human pathophysiology. Organ-on-chips combine three-dimensional tissue-like structures and microfluidic techniques to achieve in vitro tissue environment modeling and drug screening. These systems using micro-manufacturing technologies to mimic critical physiologic parameters present in vivo, such as complex multicellular architecture, cell–cell interactions, and barriers to mass transport of molecules.

The human brain is a highly complex organ with unique structures and functions, and it is difficult to discover neurodegenerative diseases at an early stage. Brain-on-a-chip models can bridge the gap between 2D cell culture and in vivo animal testing through recapitulation of self-organized neural differentiation.

Our team has fabricated a multilayered neural network constructed on a biochip by guiding and promoting neural stem/progenitor cells (NSPCs) on a microfluidic system combined with microelectrode arrays with a multi-channel platform. Besides, a 3D brain-like co-culture construct is also developed using 3D bioprinting technology. These models provide a versatile and attractive platform to obtain information about early brain development, to establish an in vitro neurodegenerative diseases model, and to assist with drug screening. 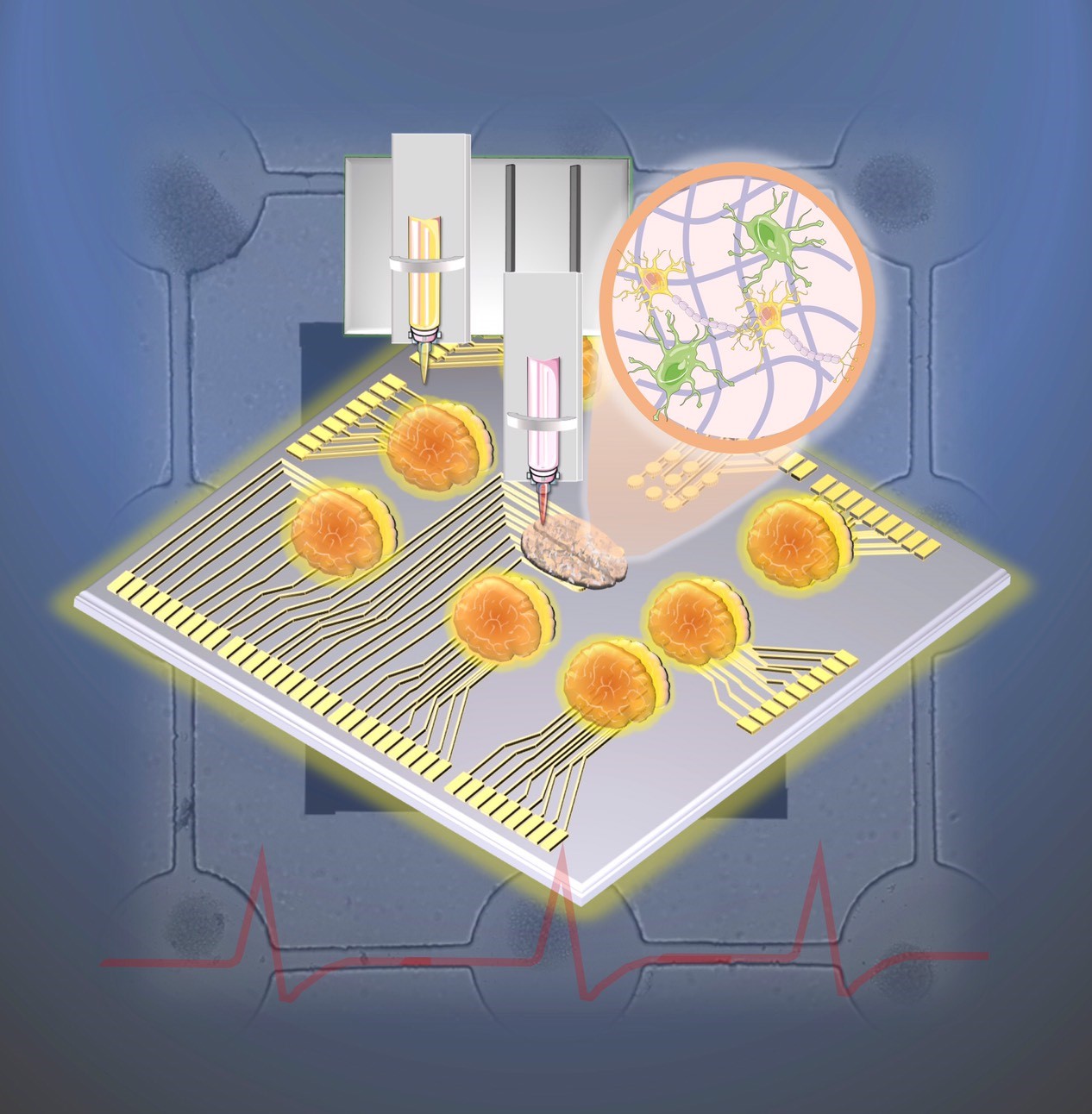 Neural constructs and network formations provide attractive alternatives to understand how the brain functions and how the neurons communicate from a quantitative point-of-view. To record the signals between neurons and to discover neurological disorders, most of the current investigations are based on animal models. However, to study the regeneration of neural networks and to discover the potential molecular targets and pathways, animal models may not be an appropriate approach. There is increasing demand for an in vitro brain model to mimic the in vivo brain niches. Despite most conventional in vitro brain models being based on 2D monolayer culture, many studies have demonstrated significant differences in cellular functions and behaviors between 2D and 3D cultures, highlighting the importance of 3D culture effects on various neural cell phenotypes. 3D cell brain models have the potential to improve the translational outcomes for therapeutics treatment and drug discovery of neurodegenerative diseases. Brain-on-a-chip models and 3D brain-like constructs bridge the gap between 2D cell culture and in vivo animal tests, and are more feasible for regulating cell-cell interactions and cellular functions, and for continuously monitoring the cellular responses.

To develop an in vitro model for the investigations of neural communication and regeneration, neural stem/progenitor cells (NSPCs) are normally used because they have self-renewal ability and could be induced into functional neurons. However, it is difficult to control for guiding the neurite outgrowth direction, promoting the differentiation of the synaptic functions and determining the network connection. Thus, we have fabricated a rapid, real-time, label-free, and non-destructive stimulation and analysis platform which combines the neurite outgrowth and network formation analysis with cell patterning. Layer-by-layer assembled multilayer films were used to functionalize the ITO-surface for NSPCs differentiation. A micropattern with channels was used to guide the network formation on the ITO-PEM substrate, and neuronal network development can be reliably and consistently monitored by electrode arrays. The microfluidic system also included microelectrode arrays with a multi-channel platform to stimulate and record the impedance for determination of the neuronal network development, organization, and degeneration. This technology may enable precise and localized neuron stimulation and surveillance for both biological research and medical applications.

Fig.1. Schematic illustration of the design, network formation and impedance record of the biochip.

In addition, reproducing the remarkable features of the three-dimensional (3D) multi-cellular environment of the brain in vitro, such as 3D cell-cell interactions, is considered a crucial step in creating a reliable drug testing platform for brain diseases. Bioprinting has emerged as a versatile technology that allows the fabrication of 3D tissue constructs of high complexity at extremely high spatial precision and reproducibility.

Our research team focuses on developing photo-crosslinkable biopolymers to fabricate 3D brain-like co-culture constructs by using 3D bioprinting technology. In particular, we featured a neuron-laden structure as nerve fibers and a glial-network within the bioprinted construct, resembling a brain-like tissue with astrocyte-neuron interactions. In the bioprinted brain-like construct, glial cells possess a high viability and can extend to form a 3D glial-network (Figure 2 (a)). Furthermore, the 3D bioprinted neuron-aligned nerve fibers in the construct indicate the feasibility that a free-stranding radial structure is able to be constructed through a photo-crosslinkable cell-laden bioink (Figure 2 (b)). The neuron cells in the bioprinted nerve fibers could be aligned in the printed fibers and further generate a typical neuronal network after incubation (Figure 2(c)).

These results give our team confidence to fabricate versatile biomimetic 3D in vitro brain/neuronal tissues via the combination of cell-laden bioink and 3D bioprinting technology in the future. These small-scale in vitro models enable precise control of biomimetic niches and the establishment of neuro disorder models for studying physiology and disease pathophysiology. Furthermore, our team has also tried to develop versatile in vitro models of neurodegenerative diseases on the chip, which may help the understanding of disease processes and the development of treatment strategies.