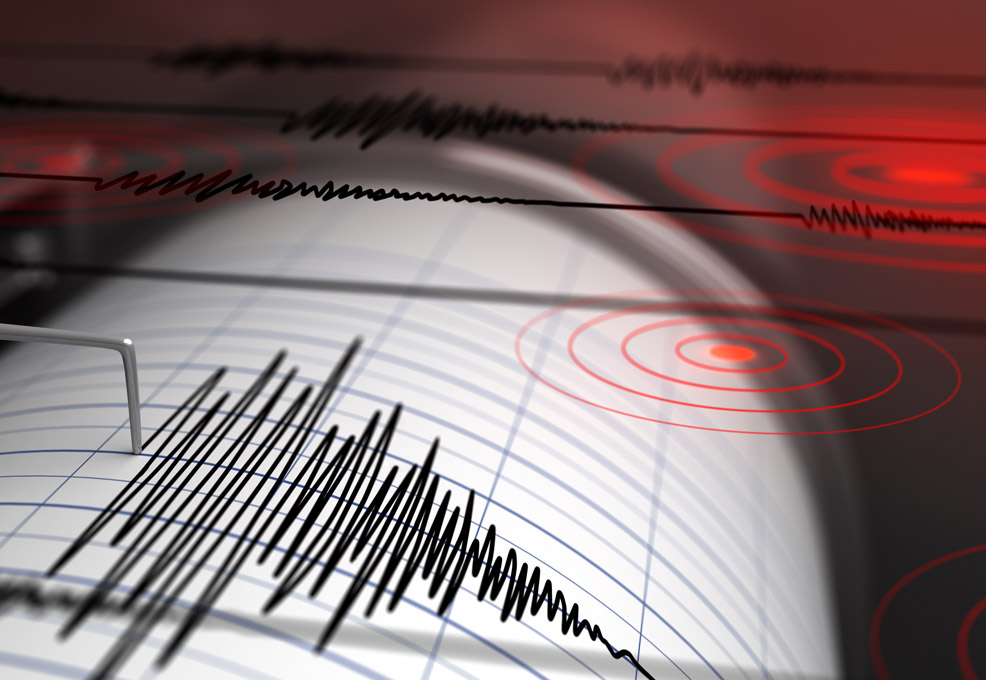 Environmental seismology (EnviroSeis) is one of the rapidly emerging fields that employ conventional seismological techniques to study the seismic signals generated at and near the surface, caused by environmental forces in solid Earth and the hydrosphere. Using the seismic signals, it provides the constraints on landslides, debris flows, snow avalanches, and bedload transport, thus allowing for real-time geohazards monitoring and timely warnings.

The rapidly emerging field of Environmental Seismology (EnviroSeis) uses seismological techniques to record active geomorphic processes at the Earth’s surface. By doing so, it is overcoming some of the fundamental shortcomings of classic observation techniques by providing continuous, non-invasive constraints on the location, magnitude and dynamics of surface processes including mass wasting (landslide, rockfall, debris flow, glacier collapse), water turbulent flow, river sediment transportation, associated erosion, and groundwater movements (Figure 1). Environmental seismic data recorded by a dense seismic network provides exceptionally high opportunities for the study of surfaces in terms of quantity and diversity. EnviroSeis has direct ties to geohazards monitoring and allows for rapid hazard assessment and timely warnings, which can be readily implemented in different places around the world by seismometer deployment and monitoring the high activities of surface erosion. Just recently, Prof. Chao was awarded the prestigious Einstein Program by the Ministry of Science and Technology to promote and implement EnviroSeis. The major topic focused on here is how to provide relevant information on dynamics of mass wasting events related to three-time stages: (1) precursor, (2) sliding and (3) after-slide. 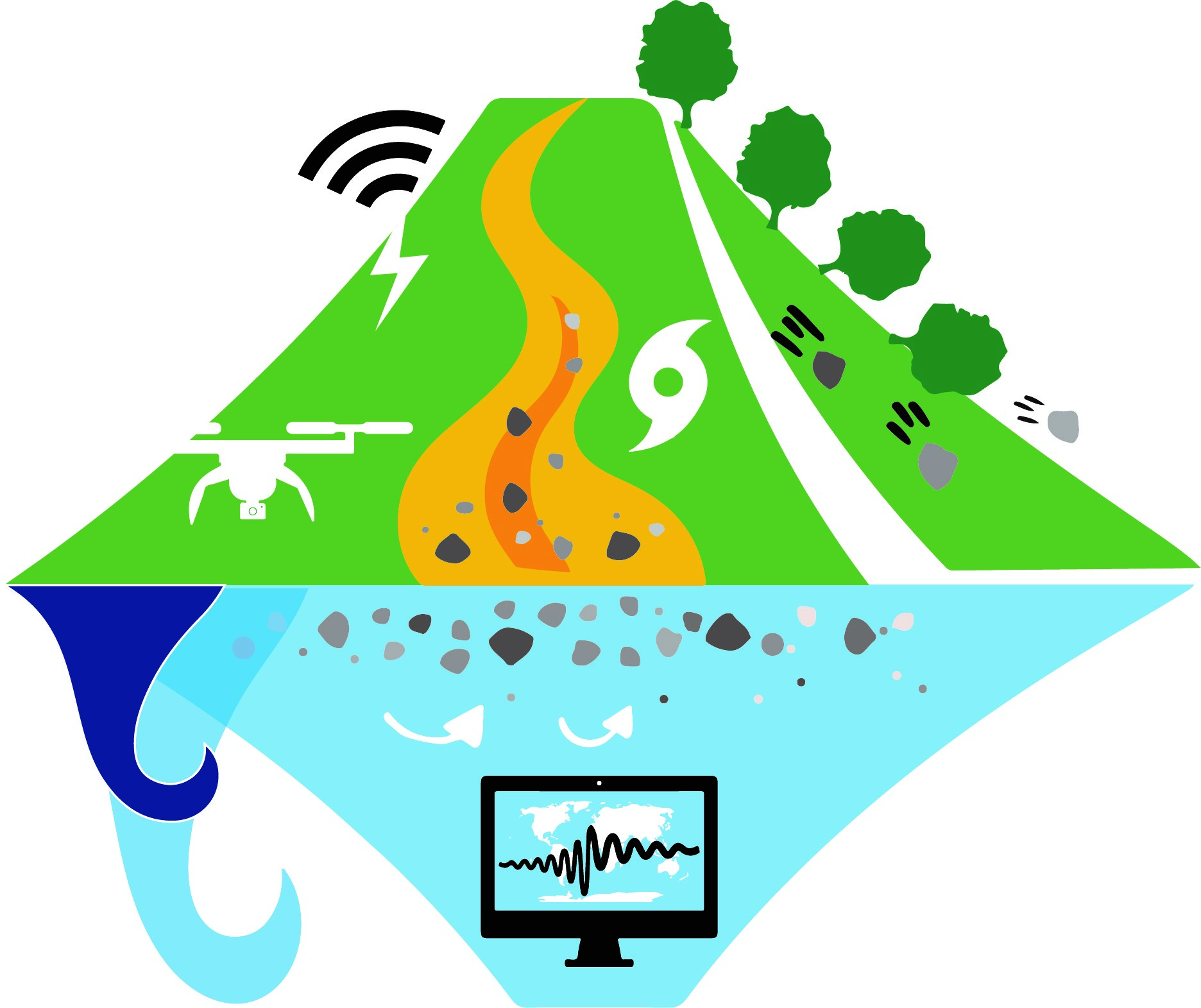 Precursor: A seismic precursor is a signal preceding the landslide event, which could give valuable information about triggering and prediction of slope failures. Our study presented that the landslide-induced seismic signals (Askja caldera, Iceland, on 21 July 2014) recorded by a few closer stations (source-to-receiver distance less than 30 km) provide the precursor signals corresponding to the stick-slip motion along the destabilization surface. Spectrogram analysis exhibits that the spectral content of the signals started to change in both up and down gliding frequency bands 30 minutes before the event occurrence, which is a useful parameter in a landslide early warning system (Figure 2). 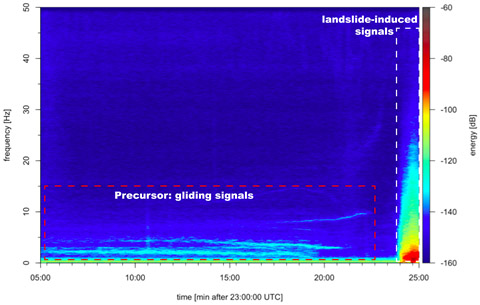 Sliding: We have performed monitoring landslide activities on a large scale throughout Taiwan (Figure 3). Not only is this work pursued with utmost attention to detail, but it is also of considerable societal importance. Large landslides occur frequently in Taiwan and often affect the population by cutting the road, energy and communication networks, and by impacting directly on settled land. A full understanding of the patterns and rates of this process is essential to the effective mitigation of landslide impacts. So far, this has relied on satellite-based remote sensing, which only permits intermittent surveys of activity. We have created for Taiwan the ability to monitor large landslide activity without time delay and under all conditions, using existing seismological facilities. This has no precedent elsewhere, on a national scale. A real-time landslide monitoring system (RLMS) has been operated online at the Comprehensive Landslide Monitoring Laboratory, National Chiao Tung University (NCTU CoLLab, http://collab.cv.nctu.edu.tw/main.html). As a result of these efforts, a step change can be expected in the efficiency with which Taiwan can survey its major mass wasting activity and act to reduce its adverse effects. 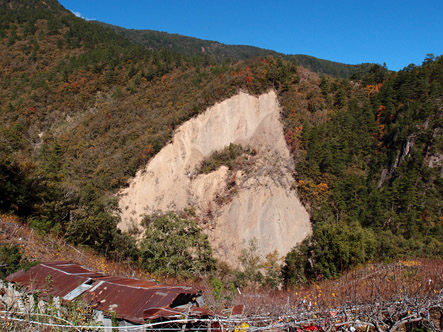 Figure 3. A landslide of meta-sandstone caused by river lateral erosion near Lishan Fault at the upstream of the Dajia River.

After-slide: Landslides occurring in coastal and lakeside regions can generate potentially destructive tsunami waves when the sliding mass moves into the water, which causes serious hazards to the coastal and lakeside populations. A large landslide which occurred on 17 June 2017 in Greenland triggered a tsunami that washed up in a remote region near the village of Nuugaatsiaq, reportedly killing four people, injuring dozens, and washing away eleven homes. In practice, the lack of timely estimations of the moving mass volume makes tsunami early warning particularly challenging. We showed how the advanced seismic technique of real-time seismic records from the Greenland Ice Sheet Monitoring Network (GLISN) can provide estimates of essential physical properties (i.e., sliding mass and velocity) of the landslide, which can be utilized for tsunami wave simulation in near-real-time. In this case, a combined analysis of the real-time seismic waveform inversion and forward tsunami-wave simulation could have enabled a timely operational warning (about 10 minutes) before the arrival of the impending tsunami waves at the village of Nuugaatsiaq.

The aforementioned work is truly innovative and important work with seismological techniques to address urgent needs for knowledge and insight into one of the principal natural hazards of the world. The research concept of EnviroSeis is transferable to other steep land settings without much adaptation and it will surely become common practice before too long in other regions with established seismometer networks. These impressive scientific contributions won the Innovation Award for Geophysics at the International Conference of Engineering Geophysics (ICEG) in 2017, and the Richard Wolters Prize Award at the International Association for Engineering Geology and Environment (IAEG) in 2018. Prof. Chao also served as co-convener of the Environmental Seismology session of EGU (European Geosciences Union).