Unveiling the Feeding Process of a Baby Star: Space Hamburger and Spinning Bullets 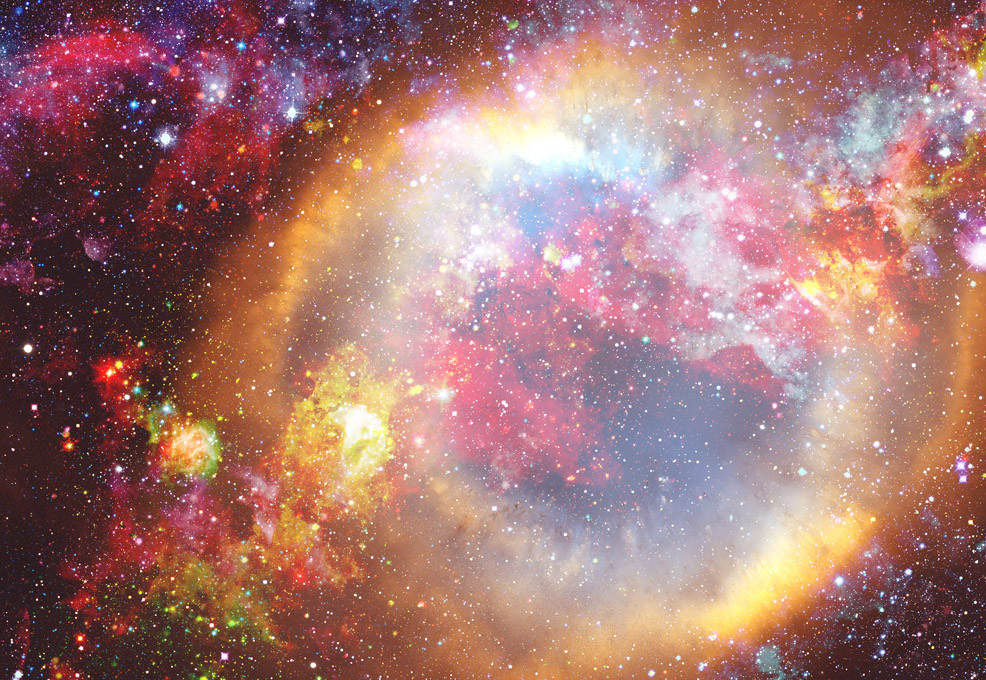 Stars like our Sun are forming all over the place in space, allowing us to study how they are formed and how our Sun came to be. They are formed deeply inside dusty molecular clouds through gravitational collapse, but the detailed process is still unclear and complicated by the presence of a magnetic field and angular momentum in the clouds. Recently, with the Atacama Large Millimeter/submillimeter Array (ALMA), the largest ground-based telescope, we have made a few breakthrough discoveries. In particular, we have obtained the first clear image of an accretion disk (appearing as a space hamburger) around a protostar (baby star), not only confirming the formation of an accretion disk in the baby phase in the presence of a magnetic field, but also providing key insights into the processes of grain growth and settling that are important to planet formation. Moreover, we have also obtained the first clear image of a rotating jet (appearing as a train of spinning bullets) carrying away angular momentum from the disk, allowing the disk to feed the baby star. This discovery provides a solution to the long-standing angular momentum problem in star formation. Our discoveries open up exciting possibilities of unveiling the feeding process through high-resolution imaging with ALMA.

Our Sun is like a mother in our solar system, providing the light and heat for the living creatures on Earth. How it was formed is still a mystery. Astronomers have been looking into space and have found that stars like our Sun are forming all over the place, allowing us to study how stars are formed and how our Sun came to be. They are formed inside dusty molecular clouds through gravitational collapse, but the detailed process is still unclear and complicated by the presence of magnetic field and angular momentum in the clouds. Since no visible light can penetrate into the cloud cores because of dust extinction, optical telescopes, including the Hubble Space Telescope, are unable to fully unveil the feeding process of the stars, especially in the early (baby) phase. Now with the full power of Atacama Large Millimeter/submillimeter Array (ALMA), the largest ground-based telescope, we have made a few breakthrough discoveries, unveiling the feeding process at unprecedented spatial resolutions. ALMA is an interferometry in radio wavelength that can penetrate the cloud cores down to the feeding zones. Taiwan has joined this large international astronomical project, thanks to our past outstanding achievement. Our discoveries have already been reported in Science Advances and Nature Astronomy, with ALMA press releases.

In order to have the best view of the feeding process, we chose to study the nearby system HH 212 that is believed to have an edge-on accretion disk. It is located in Orion at a distance of about 1300 light-years. The central protostar (baby star) is very young and started to form only about 50,000 years ago. It has already gained a mass of about a fifth that of the Sun and thus must have accreted material efficiently. Our previous observations at a resolution of 200 au already found a hint of a small accretion disk near the protostar. Now with ALMA at a resolution of 8 au, which is 25 times higher, we not only detected the disk but also resolved its structure (see orange image in Figure 1).

The disk is nearly edge-on and has a radius of about 60 au, which is about 2 times the orbital radius of Neptune. Interestingly, for the first time in radio wavelength, it shows a prominent equatorial dark lane sandwiched between two brighter features, producing a “hamburger”-shaped appearance for the disk. The presence of the dark lane is due to relatively low temperature and high optical depth near the disk midplane. The structure of the dark lane clearly implies that the disk is flared, as expected in an accretion disk model. This confirms the formation of an accretion disk in the baby phase. In some models of star formation, the magnetic field can produce efficient magnetic braking, preventing an accretion disk from forming around a baby star. Our result clearly indicates that the magnetic braking, if present, is not as efficient as we thought.

Figure 2. A 3D cartoon showing the accretion disk and spinning jet, and the implied feeding process for the HH 212 star-forming system. Credit: Chin-Fei Lee
In addition, we also detected a supersonic jet (green image in Figure 1a) coming out from the innermost part of the disk, like a train of bullets speeding down along the rotational axis of the disk. Using the ALMA with its unprecedented combination of spatial and velocity resolutions, we not only resolved its structure but also detected its spinning motion (blue and red images in Figure 1b to show the rotation direction). One of the long-standing problems in star formation is the angular momentum (rotational momentum) problem in the accretion disk, which prevents material from falling into the central protostar. Now with the jet carrying away the angular momentum from the innermost part of the disk, the disk material can readily fall into and feed the central protostar (Figure 2). Therefore, it appears that a baby star needs to spit a spinning bullet each time it takes a bite of space hamburger.
Our observations open exciting possibilities of directly measuring jet rotation and characterizing small accretion disks around the youngest protostars through high-resolution imaging with ALMA, allowing us to improve the theories of jet formation and disk accretion for the feeding process in star formation. Our observations of the vertical structure of the disk can also yield key insights into the processes of grain growth and settling that are important to planet formation in the earliest phase. In addition, our observations of the jet also open the possibility of detecting jet rotation in other kinds of objects, e.g., active nuclei of galaxies, which may play the same role of extracting disk angular momentum as the jets from baby stars.
RELATED